The Man Behind the Merferds

With a preacher's zeal and a street artist's disregard for the rules, Phil Berwick is painting his way to a better St. Louis 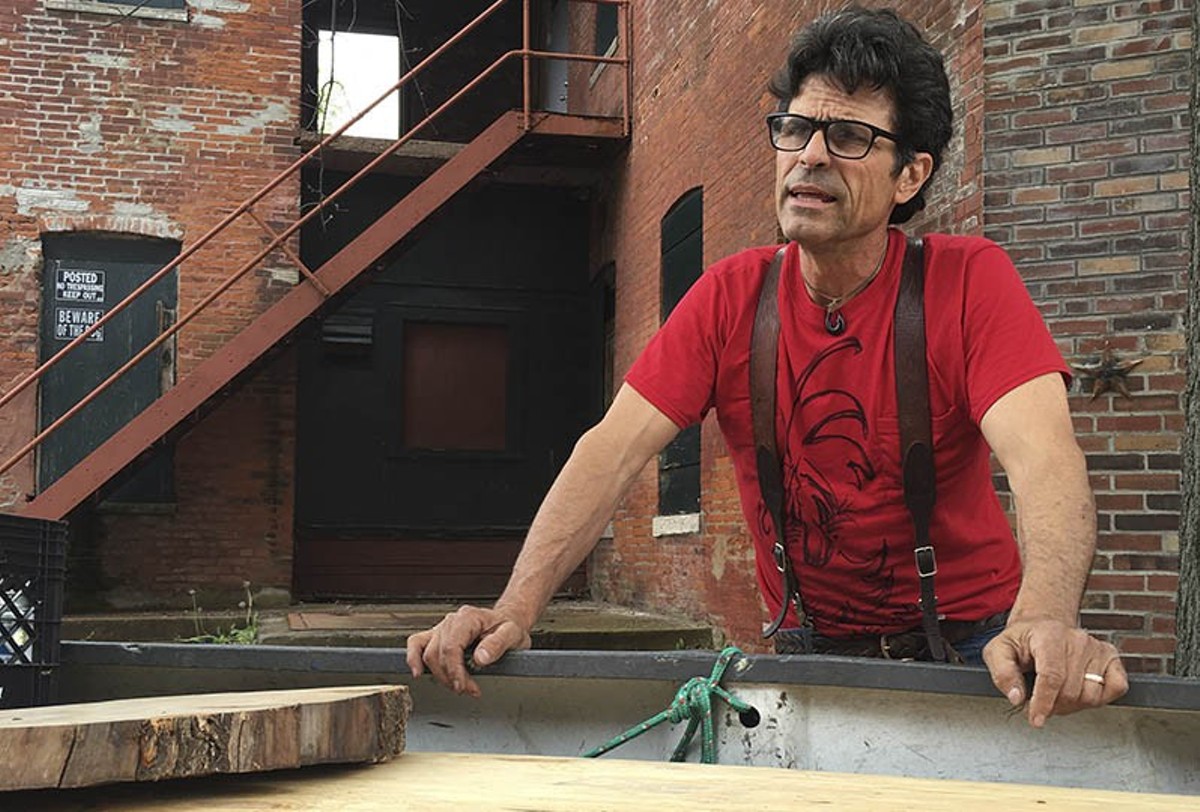 Phil Berwick has taken on his street art project with zeal. PHOTO BY THOMAS CRONE

In the chaotic days following the shooting of Michael Brown in Ferguson, Wendell Phillips "Phil" Berwick found himself drawn to St. Louis. A married father of four and owner of a tree service company in Jefferson County, Berwick spent 21 days praying, singing and otherwise spiritually engaging, crashing in a temporary tent in a shuttered KFC's back parking lot.

Months later, the lack of indictment for officer Darren Wilson set off another round of protests. A small act brightened those devastated communities — Paint for Peace, an informal group of artists who covered shattered storefronts on Ferguson's West Florissant Avenue with hand-painted plywood art. Berwick avidly signed on to the effort.

A sketcher and doodler since childhood, Berwick felt Paint for Peace light a fuse inside him. "Hundreds of artists came together to paint boards..." is a riff he comes back to, frequently.

Last August, one year after Brown's shooting, Berwick and his wife Theresa, whom he calls Tree, moved to Ferguson, into a handsome ranch house just across the street from Jeske Sculpture Park. And in the eight months since, Berwick has become a street artist. With his friend and employee Kevin "Kapp" Gary, he's responsible for erecting plywood boards across St. Louis featuring the bearded half-man, half-tree character he calls Merferd. The trees that accompany Merferd are his "treetoons."

The boards aren't legal. Berwick doesn't get the permission of property owners before he nails them onto the walls of buildings or erects them by the side of the highway. Nor does he follow the accepted code of street art, in which artists respect each others' handiwork –- Berwick proudly paints over graffiti depicting vulgarity or violence, using Merferd to transform work he considers ugly. With a street preacher's zeal, he's convinced he's making greater St. Louis a better, more beautiful place.

He has his fans — including, on one recent overcast morning, a city employee who admires his handiwork while stopped at a red light near the busy intersection of Gravois and Arsenal.

The man is a passenger in a city water truck. He gives the boards a long, hard look and then calls out to the pair standing on the corner.

Gary points to Berwick, a wiry, tanned 60-year-old with a thick shock of black hair. Berwick nods that, yes, the trio of boards affixed to the building are his creation.

These Merferds are more visible than the one Gary and Berwick added to the same building earlier in April — largely because Gary has just chainsawed down what Berwick calls "an unruly bush," a Rose of Sharon that cropped up along the curb line and grew to a height taller than either man.

While other pieces Berwick installs are overtly faith-based, with small slogans or single words of encouragement, this group is simpler; the outer Merferds wave towards the one in the middle, whose bushy face looks out into the street. They're positive, but subtly so.

As the truck drives off, a young man in the next car shouts out a bit of similarly worded encouragement: "Keep it up, man, keep it up!"