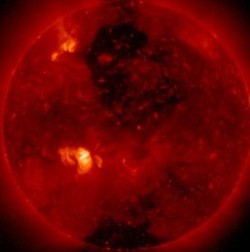 The heat is back on. I haven't missed it.
The St. Louis Medical Examiner's office confirmed that three more people died during our Fourth of July Heat Wave, bringing the body count for the summer of 2012 up to 21. These latest victims were found prior to this week, it's just taken till now for the cause of death to be pinpointed.

It was definitely the heat, which is right now in the middle of shouldering its way back into St. Louis. Projected highs hit or top 100 degrees through Thursday, with temperatures dropping to the high 90s by the weekend.

Health authorities urge everyone to use caution this week, and to check on elderly neighbors frequently. The aged, the very young and the ill are at the greatest risk.

The most recent victims of the heat are: