Veteran of New York, Chicago Police to Take Over as St. Louis Chief

Despite getting a no-confidence vote in his previous police chief job, Robert Tracy has taken the helm at SLMPD 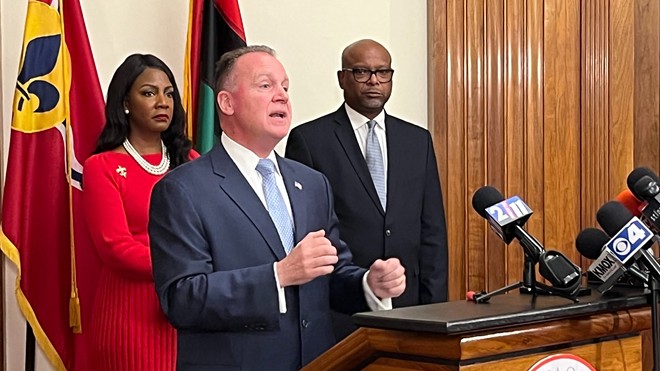 Tracy is currently the police chief of Wilmington, Delaware, a city that Tracy said went from being dubbed "Murder Town USA" to "turn-around town" during his tenure as chief.

Prior to being chief of the Wilmington force, Tracy worked in Chicago as a Crime Control Strategist and in the New York Police Department.

"I will work to give you a police department that's responsive to your needs, a police force that's accountable and accessible," Tracy said.

In introducing him, Jones spoke of his "proven track record" of reducing violent crimes in the cities where he's worked previously. Under his tenure in Delaware, shootings dropped 50 percent and crime overall went down 27 percent.

Tracy, who will be taking command of a department some say is short staffed, talked about his own history of being able to retain officers in the Wilmington department, even when they were offered more money to go elsewhere.

Tracy will be the first SLMPD chief to come from outside its own ranks, which was also the case for the Wilmington department when Tracy took the top job there. Wilmington is a city with a little more than 70,000 residents, the majority of whom are nonwhite.

Tracy said that it's his belief a small number of people are committing most of the crimes in St. Louis, and his strategy would not be one of "arresting everyone to get those few."

When asked what he'd do about the SLMPD's contentious relationship with Circuit Attorney Kim Gardner, Tracy said that his not coming from within the ranks of St. Louis law enforcement would likely be an asset.

"Whatever happened in the past, I'm not attached to that," he said.

Earlier this year in Wilmington, the city council passed a vote of no confidence in Tracy over a lack of diversity and transparency in the department.

Tracy said that the issue in Wilmington was "very short lived" and cited the fact that recent police academy classes in Wilmington have been 80 percent people of color.

Tracy said that in the near future he plans to be in every one of the city's neighborhoods, getting to know the communities whose policing he will be responsible for.

"There's a lot of places that I could have applied to," he said. "And this is the only place I did."