Are You a True St. Louisan? (QUIZ) 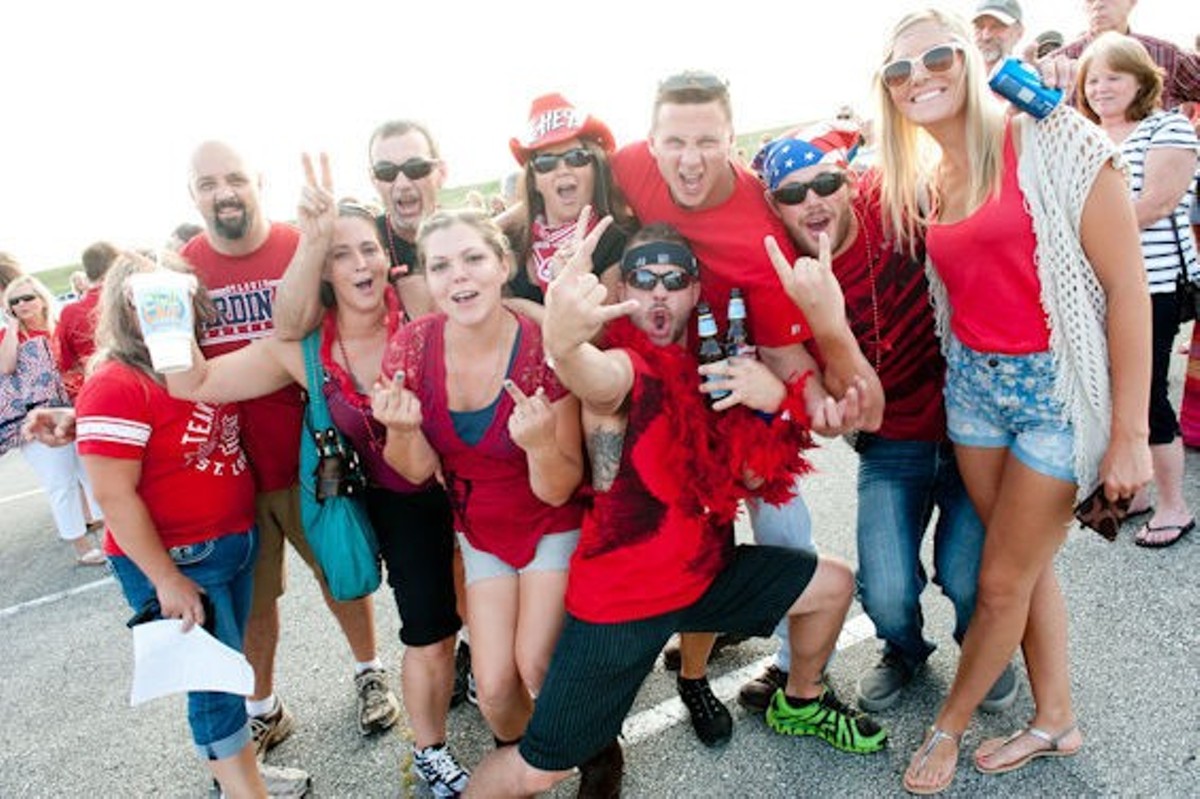 KSHE regalia? Check. Beer? Check. But are they really St. Louisans? Only our quiz will tell. JON GITCHOFF

Is it possible to quantify just how St. Louis a given person is? RFT researchers believe the answer is an emphatic yes. With a staff comprising locals and non-locals, we've observed a sharp distinction between the two castes — and after numerous heated conversations, the differences boil to the surface and become recognizable. We believe this simple quiz will in fact separate the St. Louisan from the "other."

Warning: Do not use Google or trivia books or hack into the Houston Astros database to get the answers; St. Louisans know who is the real deal and who's a transplant. Search engines cannot save you from their scorn.

1. Does your hat promote a local business? Give yourself two points for yes.

2. Are you wearing one of those green St. Patrick's Day promo hats with a Blues logo? +3 for yes.

3. Do you currently own any piece of clothing that was a giveaway at a Cardinals game? +5 for yes.

4. Do you still wear any garment that bears the name of your St. Louis high school? +20 for yes.

5. Do you own more than twenty pieces of St. Louis Cardinals flair? +20 for yes; +50 if they're for the football Cardinals. (You poor bastard.)

6. Do you own any memorabilia for the NFL team currently owned by the wealthy shitstain Stan "I'm not bald, my hair is just really bashful" Kroenke? +5 for yes. Real St. Louisans love even after they've been hurt.

7. Have you ever owned a pair of "the businessman's short pants" proposed by Bill McClellan back in the '80s? +10 for yes. If you're actually Bill McClellan, give yourself another 25 points for a great idea ahead of its time.

8. Is there any event when flip-flops aren't appropriate? +2 for no. A true St. Louisan doesn't require formality for weddings, confirmations, church or court dates.

9. Have you ever bought a risque T-shirt at the Lake of the Ozarks (e.g., Big Dicks Halfway Inn, Shady Gators, "Came on Vacation, Left on Probation," etc.)? +2 points for each.

10. What bumper stickers are currently on your car? +1 each for KDHX, K-SHE, KMOX, any local record store, "Eat-Rite or Don't Eat at All."

2. What are the ingredients in a Gerber sandwich? +3 if you said garlic bread, Provel, ham and paprika. You must get all four ingredients.

3. What shape is a piece of pizza? +1 for "square"; zero points for anything else.

4. What was served at your wedding reception? Sorry, but you get zero points for "mostaccioli." It's the law, and instead you must subtract five points if mostaccioli isn't on your list.

5. What is the catchphrase associated with Ted Drewes? "It really is good, guys!" gets you +3. Anything else is wrong.

1. What school is your high school rival? You get zero points for knowing; lose half your points if you didn't recall immediately.

2. How many of your close friends went there too? +1 for each one.

3. How many went to the rival school? Lose five points for each one.

4. Is your significant other from that school? +10 for literally fucking a rival. So hot!

5. Have you attended any St. Louis high school reunion, whether your own, a spouse's or that of a loved one? +1 for each one.

1. Have you ever attended a St. Louis World Series Parade? Zero points for yes (it's mandatory); lose five points for no.

2. Have you ever attended a St. Louis Super Bowl parade? +100 for yes. No shitty rich guy can ever steal that from you.

3. Which of the following local festivals have you attended: Greek Fest (either the city or the county one), Japanese Fest, Point Fest, Soulard Oktoberfest, Soulard Mardi Gras, Fair St. Louis, Festival of Nations, Shakespeare Festival St. Louis? +1 for each.

4. How many times have you puked at or immediately following Soulard Mardi Gras? +5 for each time.

5. Have you heckled a child in a Cubs hat at any of the Busch Stadia? +2 for yes, +5 if you shouted "he/she was asking for it!" at the angry parent of said child afterward.

7. Have you ever attended a performance by the St. Louis Symphony? +5 for yes, and yes, your school field trip counts as "attending."

8. Have you won at trivia? +1 for yes, zero points for no. All locals have won trivia at least once.

9. Have you ever decorated the trivia table? +1 for yes, zero for no.

10. Your favorite sibling has planned her wedding for October 27. You're in the wedding party and have your speech written. October rolls around and the Cards are in the World Series; Game 4 is the same night as the wedding, and you are offered a ticket for a really good seat. Which event do you attend? Trick question; no St. Louisan would schedule a wedding during the same month as the World Series. +10 if you volunteered this answer. Zero points for everything else.

3. Which of the following countries never posessed St. Louis: England, France, Spain, Germany? +1 each for England and Germany. (The Germans just think they own it.)

(Smith, Diller, Williams, Halle Berry, Lewis, Tina, Ike and Ramis were not born here. +7 if you got the others, who were.)

7. As of April 2018, which of the following people do not have a star on the St. Louis Walk of Fame: Curt Flood, Rogers Hornsby, Tony LaRussa, Red Schoendienst, George Sisler? +5 for eternal outsider Tony LaRussa.

9. What is the only thing worth knowing about Stormy Daniels' attorney Michael Avenatti? +2 for "Parkway Central High School grad," zero points for "could take down the U.S. president."

10. St. Louisans love beer, unhealthy food, baseball, high school, trivia, nostalgia and, of course, St. Louis. What differentiates St. Louisans from a 54-year-old history teacher? +5 for "there is no distinction."

5,001 points or greater? Yes, you are perfectly St. Louis in every way.