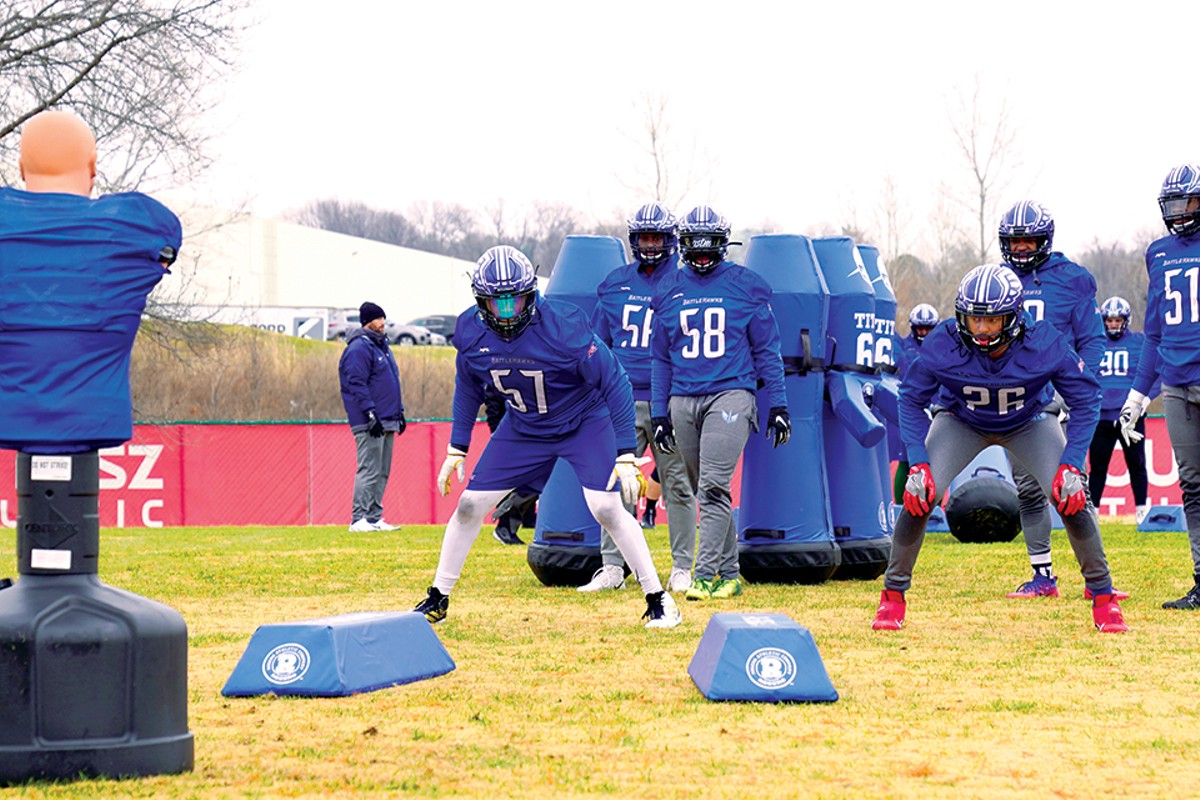 Get ready for the BattleHawks, Ka-Kaw! COURTESY OF THE ST. LOUIS BATTLEHAWKS

That's the day St. Louis' XFL football team, the mighty BattleHawks, go head to head with our most odious of rivals, the despicable Tampa Bay Vipers. It's a feud that traces its origins back to the very founding of the league, and one which has only gotten more intense with time as BattleHawk diehards' bloodlust nears a fever pitch. This game is sure to be personal, with the BattleHawks looking to settle the score after the teams' last match up, in which...uh...hang on a sec...

That's because unlike, say, the Major League Soccer team coming to St. Louis in the near future (that as-yet-unnamed franchise is expected to make its debut in the 2022 season), the league in which these teams play just got started in 2019. Sure, it's a reboot of WWE head honcho Vince McMahon's 2001 attempt at launching an "eXtreme Football League," but that effort crashed and burned within only one season — and St. Louis had nothing to do with it, as we were too busy at the time cheering on some local NFL team named after sheep or something like that (who can remember?).

So how did the Vipers end up the subject of St. Louis' scorn and derision? Simple: The fans made it so.

In the early days after it was announced that St. Louis would be home to the BattleHawks, a Facebook group for fans of the team sprung up, calling itself the St. Louis BattleHawks Fan Page. And while there was initially some talk of turning our city's collective sports ire toward the LA Wildcats — after all, that is the new home of a certain team of sheep and their bad-toupee-wearing shepherd — one simple nature fact overrode those concerns: Hawks eat snakes. And with that, a rivalry was born.

It didn't take long for that rivalry to move off of Facebook and into every other corner of the web, as well as St. Louis ESPN talk radio station 101.1 FM, where the team's bird-based (and likewise fan-appointed) battle cry of "Ka-Kaw!" soon found itself spreading like wildfire alongside numerous "facts" about the detestable Vipers' hopelessly confused fanbase.

To hear a BattleHawks fan tell it, Vipers fans:

• Wipe from side to side

• Eat chicken wings with a spoon

...And that's just a sample of the depraved behavior BattleHawks fans ascribe to those misguided enough to root for the Vipers. All told, it's enough to forge a rivalry as strong as steel, even though the two teams have never yet touched turf together.

And so, even though the BattleHawks' season officially starts with a February 9 matchup against the Dallas Renegades, it's the March 14 game that will live on in St. Louis' collective sports consciousness for millennia. While some BattleHawks lore has been hotly contested among the team's fans (that "Ka-Kaw!" battle cry continues to be a source of division), hatred for the Vipers is nearly as universal as that directed at a certain rug-wearing NFL team owner.

I mean, you just know that guy poops standing up.