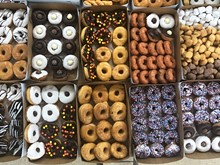 At first, Jamil Jabbar thought that bagels would be his calling card. Having fallen in love with the classic New York style of the genre, he learned how to make an authentic version and began selling them at his brother’s gas station. However, when he noticed people were much more interested in doughnuts, he pivoted his business plan, learned how to make doughnuts and never looked back. His University City storefront, Boogyz Donuts, is a bastion of doughnut perfection. Yeastier and less greasy than the typical doughnut, Boogyz’s has a unique style that stands out from the very good, very crowded field we’re blessed to have in St. Louis. Now that he’s expanded his offerings to include wildly popular vegan options, he’s showing that, even in the midst of a pandemic, there can still be successes in the industry with a little innovation and grit. — Cheryl Baehr