The flavorful extract took home top honors at a recent hash competition, and it's easy to see why 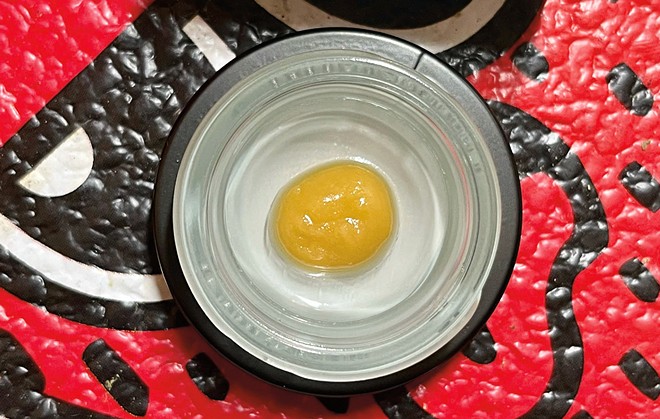 GRAHAM TOKER
Rest assured, it tastes as good as it looks.

I'm a longtime flower smoker, pretty much exclusively. But those damn terp slurper videos on Instagram really have been getting to me. I wanted in on the fun and coughs.

I'm (mostly) kidding. But as someone who has put alcohol on the back shelf in favor of the plant, I sometimes miss having a stronger effect more akin to a shot or cocktail. On top of that, a recent review of HeadChange's live sauce carts for this publication brought the idea back around of diving into concentrates, so much so I went out and secured an American-made glass dab rig. And now here I am, ready to dab.

And what better way to dive in than going for some award-winning medical hash? At the recent Melee on the Mississippi event at the Grandel, Proper Cannabis secured the hash championship belt over HeadChange, Vivid and Teal with its Strawberry Champagne. It seemed like the logical choice for a foray into the world of concentrates.

I went to Proper's Crestwood location to secure some of the champion hash. The Strawberry Champagne is sold in half-gram buckets for $30, and I got two buckets for a total of one gram for $73.50 after tax and fees. The hash clocks in with 4.87 percent terpenes and 86.3 percent total cannabinoids, and is an 80 percent mix of Strawberry Bubbles (Mimosa crossed with Strawnana) with 20 percent Runtz.

I armed my rig with a 710 Tools terp slurper banger, and I was ready to dive straight in. My initial impression of the Strawberry Champagne was that it smelled fantastic. I cracked a jar when taking photos, and a very strong aroma of strawberry candy invaded my nostrils — and not the weird candies wrapped in a strawberry wrapper, either. The initial dab was at 550 degrees (don't hate me, low-temp boys) and had a very creamy strawberry mouthfeel akin to a Strawberry Hi Chew or Strawberry Crème Saver. The effects settled in my temple and shoulders and provided me with a mild head high with a medium to medium-plus body high that was quite relaxing. I also had a lingering sweet berry taste in my mouth. These dabs worked well for me in the daylight hours, and on one occasion made my munchie cravings go through the roof.

One evening before bed I decided to take a nice dab of the Strawberry Champagne. I'd also just smoked a joint, so I was counting on this being today's Waterloo. After inhale I began wheezing like an old man at a comedy show. My eyes watered, and my lungs burned as the body high took over. I retired to the bedroom and woke up after sleeping through the night. When I arose I definitely was feeling a weed hangover. This was decidedly too much Strawberry Champagne.

Several smaller sessions utilized my Puffco Plus dab pen, and I pulled tasty clouds off of the low and medium settings. I know this mix was a special for a competition, but it would be great to see on Proper's regular concentrate offerings, as well as having Strawberry Bubbles available as a flower option. Without having tried the other competition hash, I can still definitely see why the Strawberry Champagne was voted top dog.

I was able to touch base with Proper Cannabis COO Matt LaBrier for some additional information about the winning hash. A native St. Louisan, LaBrier moved back home after spending 12 years in Colorado. That's where he originally encountered the strain.

"When we got invited to participate in the hash battle, we'd been R&D'ing 10 or 11 phenos of Strawberry Bubbles," he says. "It became pretty clear in week six that we wanted to use it because of the overtly sweet strawberry nose and its wild terpene profile that you aren't seeing in the Missouri market. Adding in the Runtz made sense with its fruity funk, and we voted internally on putting the Strawberry Champagne forward."

In the future, LaBrier says that Proper would like to offer donuts, a pre-roll joint filled with hash rosin in the middle. He also would like to do another completion centered around solventless hash (LaBrier says Proper doesn't use CRC and never plans to in the future).

"This was the first hash battle in the state — it would be cool to do the tasting blind, but we're unable to do that due to state regulations," he says. "We have a lot of respect for the other brands involved. It's a fun way to build culture and community here and give patients a unique offering."

I finally asked LaBrier how I should take a dab of the Strawberry Champagne. As a low-temp guy, LaBrier encouraged me to drop my temp down towards 450 degrees. "Waste it to taste it," he chuckled.

Deciding to take a sub-500 degree hit, I set my rig up and let it rip at 450. There definitely wasn't as much of a kick as I had pulling 550 degree dabs, but I did find the strawberry notes to be amplified.

A stupid shit-eating grin crossed my face as I exhaled. Hash is cool.