How a 1976 St. Louis Fire Gave 'Escape From New York' Its Setting 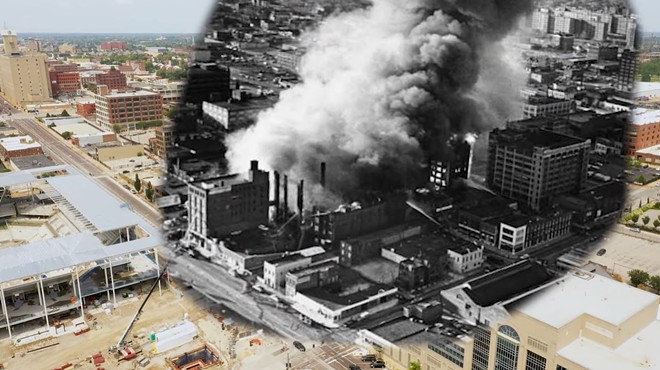 SCREENSHOT VIA YOUTUBE
A composite photo of the 1976 Heyday fire with the area today, as featured in a new documentary on Escape from New York.

The dark streets, the shuttered buildings, the nightmare sci-fi future — St. Louis had it all when director John Carpenter featured the city's downtown as the main setting for his 1981 action masterpiece Escape from New York.

The mix of devastation and grime wasn't a product of the city itself, but rather the aftermath of a firestorm that had consumed six buildings and left the area near Locust Street and North 21st Street looking like it had been carpet-bombed in 1976.

For local filmmaker Mike Gualdoni — who this week released a tightly produced documentary video exploring the St. Louis settings in the legendary film — the choice to replicate a dystopian "New York" in a section of downtown St. Louis was nothing short of genius.

"I was just really blown away by the resourcefulness of John Carpenter," Gualdoni says. "It was just a great way to save money on the budget of the film, to go down and utilize this torn-out part of the city, and it really sold the picture."

Behind Carpenter's inspired setting was a massive fire that broke out in the vacant Heyday Shoe building in St. Louis on the afternoon of April 2, 1976. Strengthened by gusting winds, the blaze collapsed buildings and melted windows, raging for hours as more than 200 firefighters and fifteen trucks battled the flames. 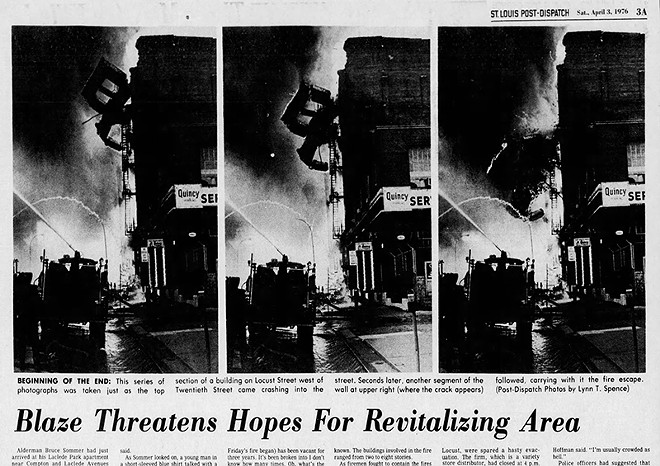 The next day, the St. Louis Post-Dispatch reported the fire's wreckage appearing "like a bomb site." One story described that "Jagged building frames jutted out from smoldering piles of rubble" and that "a charred fire truck was half covered by fallen brick."

Also on the scene were multiple Post Dispatch photographers. They captured astonishing, hellish images of firefighters caught within the clouds of smoke and flame — while also snapping shots from above, showing a great plume of smoke rising above Locust Street.

These aerial photos proved useful to Gualdoni: Using a drone, he overlaid the historic photos with the scene of the area as it is today, producing one of several striking composite images for his three-minute documentary, "Where They Shot Escape from New York."

"I always knew they shot in St. Louis, but I didn't know exactly where," Gualdoni tells RFT, adding that he used one of the 1976 Post-Dispatch photos to line up his drone shot along Olive Boulevard near the site of the fire.

#OnThisDay The 1976 Heyday fire along Locust Street was one for the ages https://t.co/6kAADnb5X5 pic.twitter.com/XqSTeoVzSg


Today, one of the buildings that survived the fire has become the Schlafly Tap Room — its distinctive arched windows can be seen in Escape from New York as the hard-assed former special-forces soldier Snake Plisken trudges through the grim streets looking for the whereabouts of the kidnapped president's plane.

It's one of several scenes in Escape from New York that feature obvious St. Louis landmarks, including the Fox Theater, Union Station and the Old Chain of Rocks Bridge.

"To walk around Locust Street, around the Schlafly building, you really can see right where they were — where that plane was, it's a parking lot now," Gualdoni says. "In Union Station, the beautiful grand hall, you can just imagine all the extras in there and Kurt Russell wrestling that dude."

But it's the scenes filmed against the destruction of the Heyday fire that strike Gualdoni most deeply. For contemporary viewers, Escape from New York preserves visual evidence of a historic St. Louis disaster — and for the film's director, it was the perfect way to avoid the expense of actually shooting a movie in New York.

In a 1994 interview uploaded to YouTube, Carpenter reflected on the unusual choice of setting, noting that the area of the Heyday fire in St. Louis retained the "eastern look" of New York City architecture.

"We shot at night," Carpenter recalled in the interview. "We wet the streets down so it reflected the lights, and the town let us shut off all the electricity for blocks and blocks and blocks.

"Basically what you've got is this shell, an empty city with a lot of bonfires and rubble in the street," he adds. "This was the look, a dangerous futuristic look that we created."