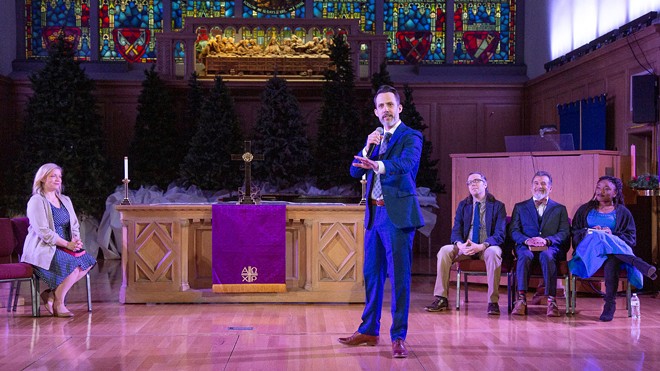 The West End Players Guild’s production of Lucas Hnath’s The Christians is a riveting, twisting tale of faith, belief and trust. While those three terms may often feel synonymous, the script artfully reminds us they are quite distinct in meaning and practice. Excellent performances and staging in the Union Avenue Christian Church’s sanctuary elevate a well-crafted script that avoids moralizing dialogue and easy answers.

The quick moving show follows the format of a service. Pastor Paul, the spiritual leader and face of a large megachurch that attracts thousands of believers, his wife Elizabeth and other church leaders walk in casually, greeting and chatting with the audience before taking their places in front of the altar. Everyone even stands for the opening prayer.

At the start of the service, the pastor announces that the church has cleared its debts more quickly than anticipated and is in strong financial and spiritual shape. That is a good thing because the sermon he delivers immediately after that announcement shakes the very foundation of his congregation’s beliefs and may, in fact, tear the church — and Paul’s marriage — apart. Pastor Paul, the fire and brimstone evangelical who has built a megachurch, unexpectedly pivots to radical acceptance that questions the existence of Hell.

John Lamb
Elizabeth (Rachel Hanks) and Pastor Paul (Joel Moses) talk about the meaning of their faith as they try to figure out if they can save the church or their marriage.

Joel Moses is pitch perfect as the successful, charismatic Pastor Paul. His approach is reminiscent of contemporary preachers in nondenominational churches, and his vocal patter is smooth, easy and warm, more approachable that reverent. Wearing an expensive-looking, impeccably tailored suit with a closely trimmed beard, he’s clearly comfortable with the power and adulation of his position. He moves through his sermon with precision, finding just the right emotional expression for each point and pausing for confirmation from the congregation with the certainty of one who expects to be followed.

Joseph Garner, as Brother Joshua the associate pastor, is the first to challenge the sermon’s message, forcefully rejecting Paul’s certainty about the afterlife with equal conviction. His story of rejection and redemption coupled with his belief that his own parents will not be redeemed is heartfelt and full of desperation. Elder Jay, a restrained yet always watchful Michael Byrd, is one of the church’s Board members and the next to question Paul, though he is not as open or honest as Joshua. Chrissie Watkins, as Sister Jenny, represents the voice of the congregation. Fraught with confusion, her story is tragically resonant and grounded in reality. Rachel Hanks, as Paul’s wife Elizabeth, is the last to question him out loud. Her conviction reverberates, overflowing with long-held pain and heartbreak. The performances are finely tuned and expertly guided by director Ellie Schwetye, keeping audiences invested in every plot twist.

An exploration of faith, belief and the business of religion, The Christians is a compelling production that refuses to provide easy answers. A strong, fully committed cast and the sanctuary setting make this a provocative and thoroughly enjoyable show that will keep you thinking long after the curtain closes.