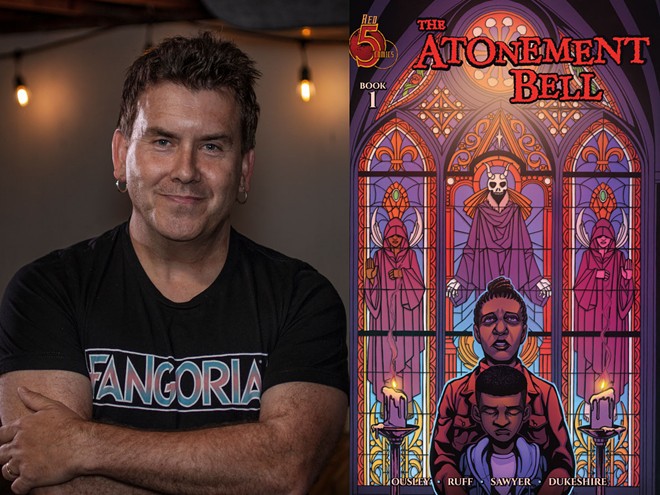 Courtesy Jim Ousley
Jim Ousley (left) is the co-creator of a new horror graphic novel that is set in St. Louis.

It’s dark and cold. Big flecks of snow fall onto the faces of the men racing on horses over snowy ground. Some look ahead, seemingly resolute, but one looks back uneasily.

Almost immediately, the source of his fear surfaces, but not in the direction he was looking. Ahead of the men, cloaked figures float in the air and one, whose head is a horned skull, holds the limp body of a woman and proclaims that there will be atonement. The men do pay, and blood spurts into the air and onto the ground. In the next panel, a red moon hangs in the background.

All that action happens within the first few pages of the new horror graphic novel The Atonement Bell Book 1, the first issue in a four-part series that hit shelves next week. Readers might expect that ethos of that classic scene to continue. But flip the page, and it’s 2022.

A mother and son drive in their green sedan on I-70 east toward St. Louis while the arch peeks out from the cityscape in the distance. The mom, Kayla, is anxious about visiting relatives over the holidays, and the boy, Jake, tries to relieve tension by teasing her about burning cinnamon rolls.

“At the center of it, it’s about the lengths we're willing to go through to defend those we love. Is there such a thing as going too far? … and the role that religion plays in all of it,” says Jim Ousley, the graphic novel’s co-creator.

The book follows Kayla and Jake as they visit St. Louis and their relatives for the holidays in the wake of Jake’s dad recently having passed away. They head to Jake’s aunt’s house, where we meet his cousin and his friend, maybe girlfriend, who works in a Bosnian market owned by her family.

One could almost be fooled into thinking that this is going to be more of a slice-of-life story than one filled with horror. But as the story progresses, Ousley drops in sinister moments, such as a nun sniffing Jake’s bloody tissue, that pay off by the end of the issue.

“They stumble upon one of the darkest secrets in St. Louis, and it involves ghosts,” he says, “It's very exciting. It's one of the most enjoyable things I've ever worked on before — certainly ever written.”

The interactions among characters and the set up all read emotionally authentic, and that authenticity is helped along by recognizable touches of St. Louis. Those range from the red-brick bungalow the aunt lives in, to the layout of the Bosnian market, to the accuracy of the exit signs on the highway.

From the very start of the creation process, Ousley, who grew up in Calverton Park near Ferguson and still lives in the area, wanted the novel to be centered on St. Louis. The project, which began as a screenplay, was always going to be about the history of St. Louis and the racial tensions in the city.

Though he’s written other horror series, this is the first that’s set in his hometown. By placing it here, he hopes to represent the city in a way that it’s not always portrayed in stories or the media. Although he drew heavily upon his own experience, Ousley also researched different communities and cultures within the city for the project. 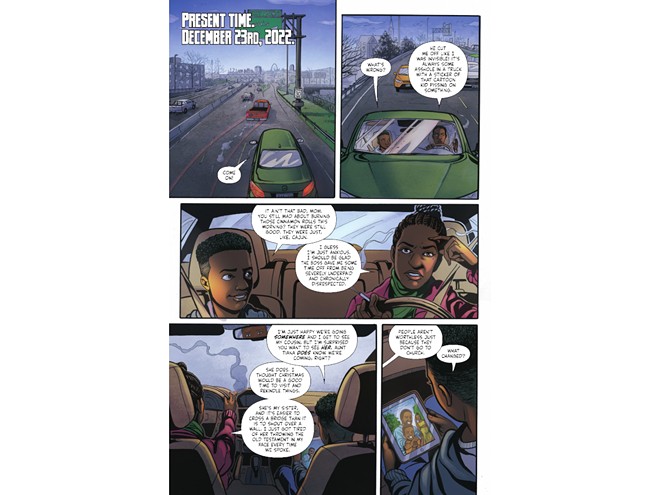 “It was also really fun for me to just learn more,” he says. “When you're writing, part of the fun is discovery, you know, not only discovering characters, but discovering what makes them tick and where they come from.”

Exploring his city through the horror genre made sense, Ousley says. For one, there’s a strong community of horror fans here and plenty of haunted houses. Then there’s the darkness in St. Louis’ history. Ousley believes that the horror genre is an effective medium to explore that type of darkness and did so, in part, by creating a mythology that incorporates the real history of this place.

“My whole purpose with that was to show how something that seems innocuous that happened a long time ago was actually extremely horrific and tragic for other people,” he says. “Horror has always been really, really beneficial to people who want to express and sort of research and navigate social issues.”

Ousley got his start writing graphic novels thanks to local publisher Ink and Drink Comics, eventually signing a publishing deal for a series called Butcher Queens with Red 5 Comics, which is also putting out The Atonement Bell. Though he wrote the script for the new series, he didn’t make the comic alone. Tyler B. Ruff created the art, Benjamin Sawyer did the color, Ed Dukeshire lettered and everyone was edited by Jason Green.

Ousley feels privileged to be able to put the project out, and he’s already begun getting some good feedback on it. He points to a preview event at the San Diego Comic-Con.

“It was really fun,” he recalls, saying the best part was having people buy the issue and then come back complaining that they would have to wait until December for issue two. “When you work on something for a long time, and you get that kind of feedback, it just fills you up, man. You know, it's just the best thing in the world.”

You can pick up The Atonement Bell at area comic shops beginning Wednesday, November 16. Ousley and others will be holding a launch event at 6 p.m. on Saturday, November 19, at The Wizard’s Wagon (6178 Delmar Boulevard, 314-862-4263, thewizardswagon.square.site) hosted by destroythebrain.com.