One Final Tribute to Vincent Price

image via
More of the many faces of Vincent Price.

Vincent Price's 100th birthday has come and gone, as has the film fest component of Vincentennial (though the exhibits at the Sheldon Galleries and Star Clipper will be up through the summer), but we would be remiss if we didn't pass on this one last tribute to Price.

It's by New York artist Zach Bellissimo, who blogs at Snaggle-Tooth Salad. Bellissimo sketched 100 of Price's greatest film and TV roles on sticky notes, starting from his first movie, Service DeLuxe in 1937, and continuing up through his last, Edward Scissorhands in 1993, the year he died.

This piece showcases many of his greatest (and not so great) roles, performances, and appearances. It was a little tough trying to find 100 roles of his, so I had to really dig deep, but I still couldn't get exactly 100, so I had to resort to a few doubles and also a series of his different costumes from his personal horror favorite "Theater of Blood". I know a lot of these aren't really the best drawings but I feel that the whole piece together is what will look good.

Like most of us, Bellissimo became a Price fan without even realizing it, when he saw The Great Mouse Detective as a small child. Price provided the voice of the evil Professor Ratigan. A few years later, Bellissimo saw The Raven on TV, recognized Price's distinctive voice and became a devout fan: "I was very amazed that such an actor who was mostly known for his horror roles would step out of that and do light and funny roles too...and succeed at it!"

Bellissimo manages to convey this mixture in his drawings of Price, which are, frankly, adorable, just as we imagine Price himself must have been. We'll forgive him for the reference to Price's "home town of Missouri." But remember, buddy, it's St. Louis, and don't you forget it! 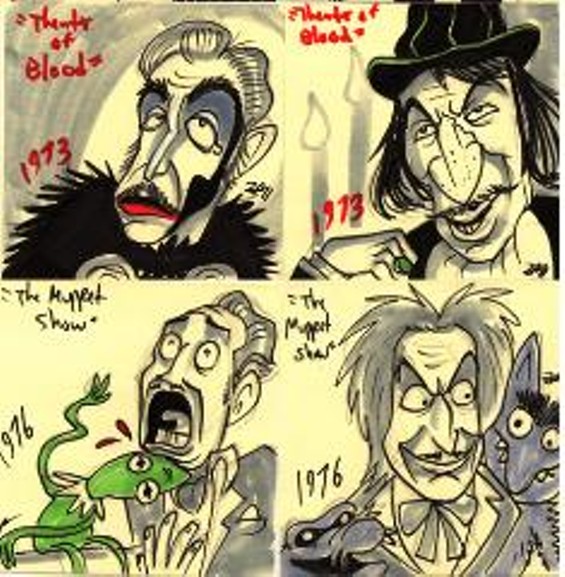