You may not instantly recognize the name Jerry Herman, however it is quite likely that you are familiar with his work. As a composer and lyricist, he’s responsible for some of Broadway’s most memorable shows from the 1960s into the 80s. His biggest hits, Hello, Dolly! and La Cage Aux Folles, are Tony-winning pop culture touchstones, and many of his songs reach far beyond the world of musical theater.

The New Jewish Theatre celebrates Herman with a thoroughly enjoyable revue that unfolds like the popular musical variety shows of the 60s and 70s. Though there’s a bit of dialogue, the two-act show is primarily a pageant of song and dance, delivered by a well-balanced quintet featuring Kelsey Bearman, Molly Burris, Christina Rios and the mother / daughter pairing of Lisa and Greta Rosenstock. Directed and choreographed by Ellen Isom, the show is a heartfelt tribute to a prolific talent.

The quick-paced Jerry's Girls revue features ensemble numbers interspersed with solo performances, and each member of the quintet has at least one moment where their considerable talents shine. Act one opens with an ensemble piece, “It Takes A Woman,” which sets the tone for an evening filled with exceptional harmonies. More that just simple chords, the voices bend around and counter each other, occasionally veering into purposeful discord that beautifully resolves without distracting from the melody line, such as in the hopeful “Put on Your Sunday Clothes.” 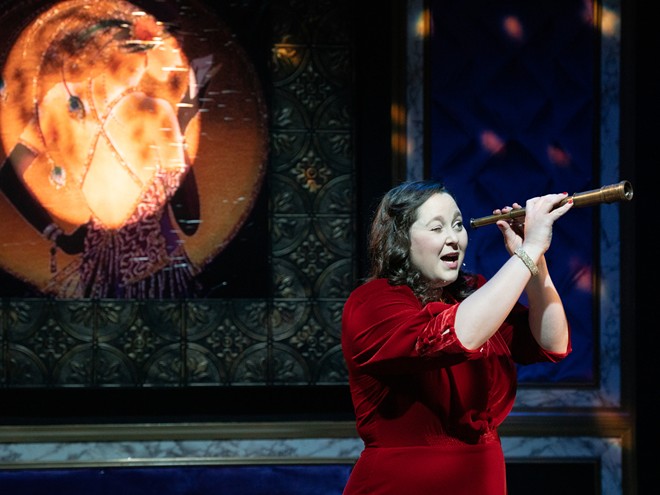 Jon Gitchoff
Kelsey Bearman holds a spyglass up to her eye in Jerry's Girls.

The ensemble pieces are lively with fun choreography, plenty of props, humor and even an unexpected, but enthusiastically received, tap number. “Hello Dolly!” includes a hilariously spot on impersonation of Carol Channing by Burris and closes the first act with a bang. There are several extended medleys, including tributes to Vaudeville and the movies that add humor and interest while showcasing Herman’s considerable flexibility. The delightful “La Cage Aux Folles Medley” serves as the show’s grand finale much as it capped off Herman’s illustrious career.

Solo performances are thoughtfully sprinkled between the ensembles numbers, and there are a number of individual highlights. “Just Leave Everything to Me” from Lisa Rosenstock showcases her range and vocal texture. Rios’ exquisite and surprisingly delicate “Before the Parade Passes By” may bring a tear to your eye, and she and Lisa Rosenstock connect perfectly in “Kiss Her Now,” a touchingly pleasant duet. Greta Rosenstock’s bright midrange shines in “Wherever He Ain’t” and the full of good wishes “Shalom.” In addition to her comic turn as Channing, Burris commands sympathy in the plaintively sad “I Won’t Send Roses.” Bearman’s “I Don’t Want To Know,” with piano accompanist Cullen on the accordion, reverberates with a lovely dissonance.

Filled with a sense of nostalgia for the once-popular variety musical show, Jerry’s Girls earns vigorous audience applause not simply for the tunes but for the quality of the voices delivering them. Director Isom and the performers lean into the harmonies and nostalgia of a variety show to deliver a satisfying musical revue with a touch of your grandparent’s era and style.

Catch Jerry’s Girls Thursdays through Sundays at the Wool Theater (2 Millstone Campus Drive) through Sunday, December 18. Showtimes vary by date. Tickets are $52.97 to $63.78.