COURTESY CIRCUS HARMONY
Circus Harmony students performed in front of St. Louis landmarks, while their German counterparts did the same in Stuttgart.

Juggling, riding a unicycle and doing acrobatics may just be the new frontier for developing intercontinental connections.

In light of the 60th anniversary of the partnership between St. Louis and its sister city, Stuttgart, Germany, two organizations are celebrating in their own unique style — a circus performed by children from each region.

St. Louis' Circus Harmony and Stuttgart's Circus Circuli created a video that showcases the performance of each troupe side-by-side, despite being on opposite sides of the globe.

Circus Harmony is a nonprofit group that uses the teaching and performing of circus art to motivate social change. Building bridges with other communities is part of its mission, represented through last year’s 741 shows that reached audiences globally.

With services ranging from recreational classes all the way to professional circus education, the organization offers classes for people of all skillsets and of any age. Its rehearsal location is a space within the City Museum, with practices seven days a week, but the video effort took the troupe to new sites sprinkled throughout the city.

The two troupes were connected through an organization called the St. Louis-Stuttgart Sister Cities. After the initial introduction, the directors of each group bonded over the restraints of directing a circus amidst a pandemic. They decided a partnership video displaying connection in a time of social distance would be a positive addition to 2020.

“Was it the same as doing it in person? No, of course not. But it was still a positive, fun experience, and it was a great light in these dark times,” says Jessica Hentoff, artistic/executive director for Circus Harmony.

As local COVID-19 restrictions prohibited the daily gathering of either group, the painstaking process of learning the routine took place over Zoom. The students were taught their routine, recorded a video of it and then sent it to the other country’s troupe for them to practice. They were not able to perform the routine in-person for the first time until the day they shot the video.

While they can still do juggling, unicycling and tumbling outside, the act that they are famous for was nixed. Circus Harmony’s partner acrobatics, the act of standing on a performer’s shoulders and throwing each other in the air for tricks, had to be sidelined for this performance due to safety precautions.

Hentoff says she can still see the good in the situation. “We’re trying to look for the pandemic positive, and having a wider audience is one.” Both troupes hope to gain an international viewership of the video.

Despite the limitations of socializing online, Hentoff recalls how the American and German performers connected instantly. “These students live in totally different cultures, but their connecting point was the circus,” she says.

Hentoff says the most challenging part of the process was navigating the time difference. With Stuttgart being seven hours ahead, the German students shot the video on a Saturday night, while Circus Harmony worked simultaneously on Saturday morning. Another barrier was language. Each trick used a different name in the troupe’s native language, requiring some research on both sides.

The students performed in front of similar landmarks in each of the cities. When Circus Circuli’s troupe did handsprings near their famous TV tower, Circus Harmony did the same by the Bissell Street Water Tower. As students juggled in front of the St. Louis Zoo, Circus Circuli did so by their lion sculpture. While American students did acrobatics in the World’s Fair Pavilion, German students performed side-by-side in a similar area overlooking their city. What they learned was that the two cities weren’t quite as different as one would believe, despite being across the globe.

“We hope that people will watch the video and they’ll see things about St. Louis and about Stuttgart and it’ll just make them smile,” Hentoff says. She hopes that maybe it’ll even teach St. Louisans about their own city and its plethora of landmarks.


The two troupes of students have decided to continue connecting. This holiday season, they’re sending boxes of local goodies to one another. Circus Harmony sent what the students deemed the perfect St. Louis foods — gooey butter cake and Red Hot Riplets chips.

“That was definitely the kids’ idea,” Hentoff laughed.

By having their regular classes and shows cancelled, Circus Harmony lost a large portion of its income. However, January classes are available now online. Each round of classes ends with an online show, learning real circus skills with props sent right to your front door. Hentoff believes they’ll make a great holiday present, to gift an experience rather than an object. They’re also offering to help liven up the video calls with relatives across the country, where attendees can learn circus skills over Zoom.

“It feels like the end of the world, it certainly does. But it’s not,” Hentoff says, “And what’s gonna keep it going is us creatively connecting with other people — and the circus has always been a place that is creative, innovative, and uplifting.”

Even after the video debuts, Circus Harmony has plenty of projects in the works. They’re actively searching for an outdoor, covered space to meet during the summer. Also, on March 16, the one-year anniversary of the St. Louis pandemic lockdown, they’re premiering a digital cookbook show. Each recipe will link to an act performed by the troupe. The idea was inspired by the idea that “food motivates people,” as Hentoff puts it.

And of course, someday, they hope to find the funds to allow the sister city troupes to meet in person.

“What we teach is, if you focus on what connects you instead of what divides you, you’d be amazed what you can create,” Hentoff says. 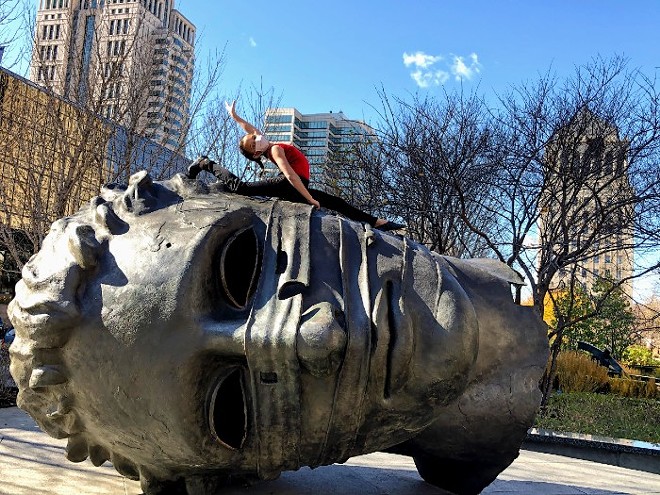 COURTESY CIRCUS HARMONY
The students practiced over Zoom before filming the main performance.