Things to Do
Theater & Performance

McCausland, who helped legalize cross-dressing in the city, died in November 2020 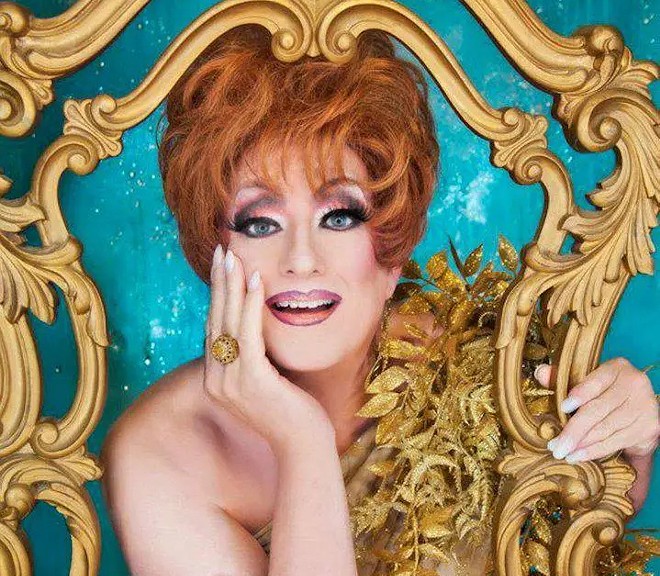 Courtesy James Lesch
Michelle McCausland was the focus of a lawsuit that overturned St. Louis laws making it illegal to wear clothing of the opposite gender.

Michelle McCausland had something of a signature segment in her drag routines that she'd do to "Climb Every Mountain" from The Sound of Music.  She'd pull six, often-tipsy audience members on stage and stack them into a pyramid.

James Lesch, who often worked alongside McCausland as DJ Jimmy NoShow, recalls the famous routine with a delighted laugh.

"The first time seeing that I was like, 'Oh, my gosh, she's lost her mind,'" he says. "You can't, like, this isn't gonna work. I come to find out that she's been doing this for years.  It was so in the spirit of Michelle to throw caution to the wind and go for it."

Each time, Lesch would hold his breath waiting for disaster, but it always worked. That success, he says, demonstrates the strength of the connection that she had with her audiences.

But McCausland, a.k.a. Michael Shreves, wasn't only a celebrated performer: She was an icon in St. Louis drag history. On November 28, 2020,  she passed away after a battle with COVID-19, and on Sunday, August 28, a group of friends, supporters and admirers will gather for an evening of performances to honor her legacy.

The event, Remembering Michelle McCausland: A Truly Terrific Absolutely True Story will take place from 5 to 9 p.m. at the Mahler Ballroom (4915 Washington Boulevard, 314-361-4411).  Tickets cost $35 and proceeds will benefit Vivent Health and Stray Dog Rescue of St. Louis; an anonymous donor will be matching all funds raised.
click to enlarge 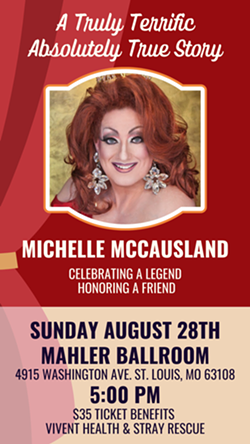 Lesch will host alongside Dieta Pepsi, and there will be performances from Adria Andrews, Alexis Principle, Candy James, Candy Principle, Jade Sinclair, Karma T. Cassidy, Kirsten Dubo, Krista Versace, Madison Elise, Mrs. Sherri, Tabbi Katt and Tumara Mahorning. All the numbers will pay homage to McCausland as a performer and the tangible impact she had on the community.


"She was an activist," Lesch says. "She lived through the AIDS crisis, and she knew what it meant for the community to come together and support one another. So she wasn't just someone who was jumping on stage and collecting dollar bills, but she was using that platform that she had to create good in the community and awareness for people who really needed it."

McCausland is most famous for being the focus of a landmark lawsuit that legalized crossdressing. Previously a St. Louis city ordinance made it illegal to wear clothing of the opposite gender. While performing at Uncle Marvin's Lounge in 1984, McCausland was arrested for being dressed as a woman, St. Louis Public Radio reports. The ACLU took up the case, leading to the overturning of the ordinance.

"It's kind of crazy to think about, but Michelle is the reason that drag is legal in St. Louis," Lesch says. "It's easy to lose sight of how far and how quickly LGBT acceptance has advanced in society. It's so big, you can't grasp the importance of it."

That was far from McCausland's only act of bravery. Lesch points to another incident, when she competed in the Fox Theatre's "Betty Grable's Best Legs in St. Louis" without letting anyone know she was in drag — until ripping off her wig at the end.

"The drama," Lesch says. "It just speaks to Michelle's tenacity of being like, 'Well, I want to do that, too. And I'm going to.'"

When it came time to plan the event, organizers decided to hold off until it could be held more safely. A side effect of that longer time frame, it seems, has made an increasing number of performers wish to take part.

That, Lesch says, is a testament to just how many people cared so deeply — which should make for a truly spectacular event.

"It really just truly will be a celebration of life because she brought so much joy to people," he says. "We want to keep that joy as part of her legacy."