The 2017 LaBute Festival's Second Half Keeps Up the Momentum

Presented by St. Louis Actors' Studio through July 30 at the Gaslight Theater (358 North Boyle Avenue; www.stlas.org). Tickets are $30 to $35.

The second half of the LaBute Festival always faces something of an uphill battle. If you enjoyed the first half, you invariably end up comparing the later plays to their predecessors. If you didn't like the first half, the second round of plays has to redeem the whole festival. But William Roth, artistic director of St. Louis Actors' Studio, clearly knew what he was doing when he divided his bounty, because this back half of the festival stands on its own merits.

There are only two new works debuting this time. Neil LaBute's "Hate Crime" premiered in the first half, and here it's joined by "How's Bruno" by Cary Pepper and Tearrance Chisholm's "Sin Titulo."

Pepper is an old hand at the LaBute Fest, with his hilarious "Mark My Worms" one of the highlights of last year's festival. "How's Bruno" is in the same vein — a fast-paced comic romp that requires verbal dexterity, a dancer's timing and a trio of stone-faced actors.

Spencer Sickmann is our disheveled Everyman, who's working on his laptop in a coffee shop when he receives a cryptic text from an unknown sender that simply asks, "How's Bruno?" He fires off a nonchalant answer, thinking the sender will realize his or her mistake. Instead, he receives a barrage of pointed questions in response.

Then two hoods in leather jackets and sunglasses show up (Reggie Pierre and Ryan Lawson-Maeske) and begin a more threatening line of questioning, all in code phrases. Sickmann's answers throw them into a state of panic, and soon our beleaguered hero realizes he's in over his head. When the guy they call the Gardener (Chauncy Thomas) shows up to further interrogate our man, it's almost more than he can take.

Pepper's script is mostly nonsense, but it's sensationally entertaining nonsense, and director Nancy Bell has her cast of four play it very broadly. 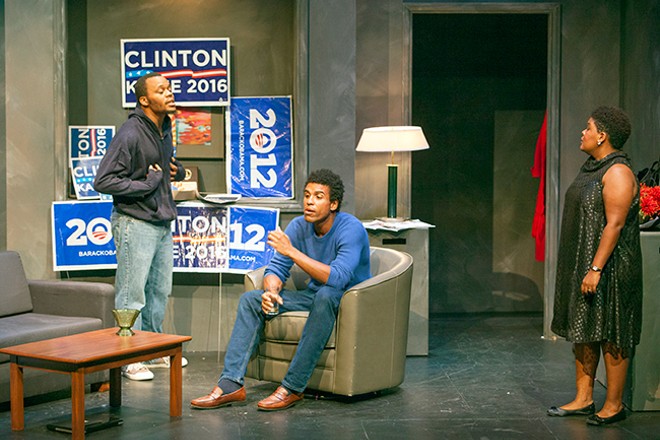 PHOTO BY JOHN LAMB
Jaz Tucker and Reggie Pierre pontificate on who runs the world, and how to stop them, in "Sin Titulo."

"Sin Titulo," by playwright Chisholm (a St. Louis native), is more grounded in reality, but no less entertaining. Naomi and Damascus (Patrice Foster and Reggie Pierre) live in a St. Louis home cluttered with Clinton/Kaine signs and fliers. He ran the local campaign office, and Clinton's defeat has not just crushed his spirit — it's sent him into a depressive spiral that has the two formerly happily-married people bickering about talking to Uber drivers (he's against it), the possibility of children in their future (he's against it) and the unexpected arrival of her brother, Lloyd (shockingly, he's for it).

Lloyd is played by Jaz Tucker, and he almost steals the show. He's homeless, he's mentally ill and not taking his medication, and he's working on a plan to take down the secret society that he believes controls the world, Sin Titulo. (It means "without title," and Lloyd often mispronounces it, despite his brother-in-law's correction.) Damascus sees Lloyd's delusion about how the world works as a means of getting him to take his medication, so he plays along with the early stages of Lloyd's plan. The two make an engaging pair as they get high together and discuss how the world works, how to start a revolution and how to maintain a successful relationship.

Naomi is frustrated with her big brother's unpredictability, his lack of boundaries and his constant disrespect. She's also willing to give her husband the space he needs to work through his problems, whatever they may be. It's a thankless role, one that could be reduced to the scold/good-woman-supporting-her-man dichotomy. Chisholm thankfully gives Naomi a rounded personality, while Foster gives her a backbone. When it comes time to fight for what she wants, you're not surprised that she gets it.

Chisholm's script is a window into a world that's not often seen on a stage. Naomi and Damascus are a middle-class black couple who are able to navigate the white world and still have real-world problems. They deal with depression, mental illness, the casual racism of St. Louis and their own perception of how they're seen — or not seen — by white America in the Trump era. Damascus lays things out clearly when he says, "I always thought the world hated us, but it's different when it's been diagnosed." The bitterness in Pierre's delivery is unmistakable; the sentiment is not just words on a page.

If "Sin Titulo" has a flaw, it's that it feels too long by ten minutes or so, but I couldn't swear to it. Chisholm has a strong, well-defined voice, and director Linda Kennedy channels it beautifully on stage. The final scene of Damascus and Naomi huddled together, cradling each other and their future, lost in the possibilities tomorrow may bring, is both uplifting and inspiring.