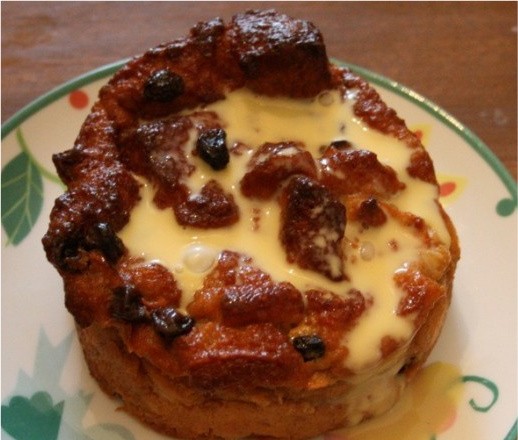 Let's stipulate from the start that bread pudding isn't a "St. Louis dish," as such. Apparently first concocted as a way not to waste stale bread, this dessert staple has lasted for centuries and still shows up on brunch and dessert menus from Argentina to Louisiana. (We once had a rich chocolate bread pudding in Vancouver, BC.) But when Gut Check visits Ruth's Chris Steakhouse (1 North Brentwood Boulevard, 314-783-9900), it's as much for this simple but sumptuous dessert as for the main course. That's qualification enough.

Ruth's Chris is certainly proud of its bread pudding - so much so that the recipe is included on the company website. They use one eight ounce loaf of French bread cut into half-inch cubes, as well as one small apple, an entire stick of butter and a pint of half and half. (That's before you get to the sweet cream sauce. Hey -- maybe reading dessert recipes isn't such a great idea.)

The secret ingredient? Bourbon. The actual pudding includes a tablespoon, and the sweet cream sauce is liberally laced with Jack Daniel's. The result is a small, round cake that is deceptively dense, thick and rich yet soft enough to be easily broken up with a fork. You'll be bringing home leftovers after a dinner for two.

In the course of our semi-exhaustive research, Gut Check discovered that Ruth's Chris' Clayton location (and probably downtown as well) will prepare this dish for carry-out. This means we won't be waiting for a special occasion to enjoy this treat again.

Beginning last year, RFT restaurant critic Ian Froeb counted down -- in no particular order -- 100 of his favorite dishes in St. Louis. Now Gut Check has taken up where he left off. Check back frequently as we detail our 100 favorites, and don't hesitate to send us yours, too, either via the comments thread or at [email protected].