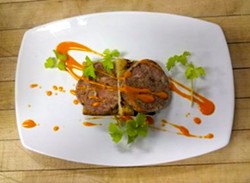 Andrew Jennrich, chef de cuisine of Farmhaus (3257 Ivanhoe Avenue; 314-647-3800), describes this smoked ham hock terrine as "my half- ass, feeble attempt at an homage to the greatest barbecue empire in the world, Mike Emerson and Pappy's Smokehouse, while still using some of that Farmhaus tradition."

"We actually do a similar version of this dish [at Farmhaus] from time to time as well," he adds, though his recipe includes suggestions for home cooks who might not have the full arsenal of tools (a vacuum sealer, for instance) that Farmhaus does.

2. At the restaurant we would vacuum-seal the hocks to "force cure" them -- basically compress the salt-sugar into the meat in a quick period of time -- but the home cook could simply wrap each hock very tightly in plastic wrap.

3. Place hocks in refrigerator for 3-4 days if vacuum sealed, or 5-6 days if wrapped in plastic.

4. Remove hocks from fridge, rinse cure off of them under cold water, then pat dry with towel and place back in fridge for 24 hours. This will dry out the outside, which will allow the hocks to take on the smoking process better.

5. After 24 hours, remove hocks from fridge and place in smoker. Set smoker to 200 degrees and smoke hocks for 8-10 hours. For those home cooks with no smoker, I use my charcoal grill at home. Place some wood chips over the top of the coals and "smoke" hocks with indirect heat source.