The adult-themed waffle company aims to spread joy, one penis-shaped treat at a time 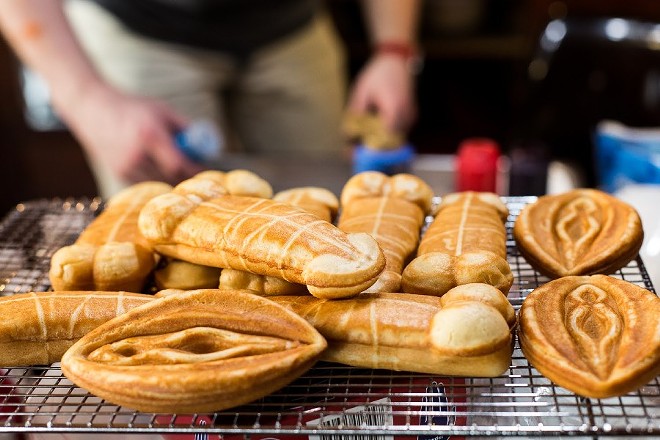 "We have the best tasting dicks in St. Louis."

Soon, folks throughout the metro area will be able to taste that assertion for themselves thanks to the husband-and-husband team's new adult waffle brand, Naughty Bits STL. The company, which specializes in penis and vagina-shaped waffles, launched earlier this week and will hold its first pop-up (tee hee) event on Saturday, August 27, at Bella's Sweet Treats & Boozy Shake Shop, the downtown storefront the pair has owned for the past four years.

As James explains, the idea for Naughty Bits came to him and Blankenship thanks to a friend who had encountered the anatomically correct edible delights on a trip to Europe. She shared her experiences with Blankenship and James when she arrived back in the United States. At first, they found the concept hilarious, but their laughter quickly turned to intrigue as they wondered whether they might bring such an idea to life in St. Louis.

The pair began researching the concept and found only a few places doing something similar in the country; there were a couple of bakeries on the East and West coasts and one in Chicago offering P and V shaped waffles, but nothing like it in St. Louis. It was a hole in the market they were eager to stuff.

"Every time we go online thinking we will see something great, we see that everything is going to shit," James says. "We definitely see this project as a fun distraction from that — for ourselves, too. This just really spoke to us, and we said, 'OK, we are doing this.' We kind of rushed it a bit because we kept seeing it get closer and closer to us as we did research. We figured that if we didn't do it, someone else will."

According to James, the burgeoning penis- and vagina-shaped-waffles craze began in Japan with an event called the Festival of the Steel Phallus, also known as the Festival of the Peen, an annual event held in Kawasaki that is said to date all the way back to the 17th Century. During the festivities, revelers feast on a variety of phallus-shaped foods, including waffles. The idea caught on in Europe and grew to include vagina-shaped waffles. James can't help but laugh when he describes the wide range of flavors he's seen come out of European bakeshops: There's everything from haute delicacies at traditional European bakeries to raspberry-filled, honeypot-shaped treats called "Aunt Flo."

Blankenship and James are having fun coming up with creative names and flavors. Though they are still in the process of rounding out their offerings, current penis-shaped varieties include the Nut Job, which features Nutella and coconut shavings, and the Mr. Goodhead, a cream cheese–filled waffle garnished with marionberry syrup and Fruity Pebbles.

For the vagina-shaped offerings, called Lady Bits, the pair have come up with such fun flavors as the Pussy Galore, featuring Nutella, vanilla ice cream, white chocolate and crushed Oreos, and the Cougar, which pairs the waffle with vanilla ice cream dark chocolate, caramelized peanuts and salted caramel. Naughty Bits STL even has some savory offerings, such as the Hot Cock, a mozzarella filled waffle topped with hot honey, Red Hot Riplets and dill ranch drizzle.

The partners are excited about the endless potential they see with Naughty Bits STL. In addition to their first pop-up, they will be serving their waffles at Tower Grove Pride and plan on doing a series of subsequent pop-up events at different restaurants around town. Eventually, Blankenship and James see the brand growing to its own storefront or food truck, as it is already getting substantial buzz in the short time it's been public. They know that they will surely be a hit with bachelor and bachelorette parties, and they are even thinking about doing a special delivery option that will allow people to send someone a box of dicks.

Whatever path they take with Naughty Bits STL, James insists that they will never lose sight of their mission.

"We just want to have fun with it," James says. "It just comes from us wanting to be fun and not take ourselves too seriously. Things like this bring a smile to people's faces.... We're really excited about it."

Clearly, the waffles are too. 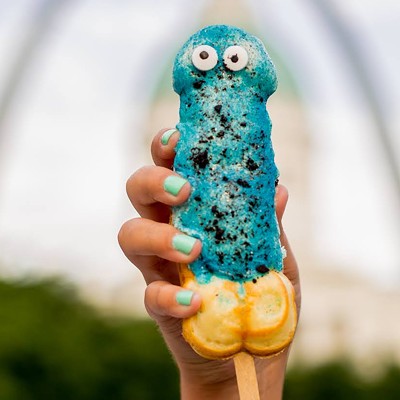 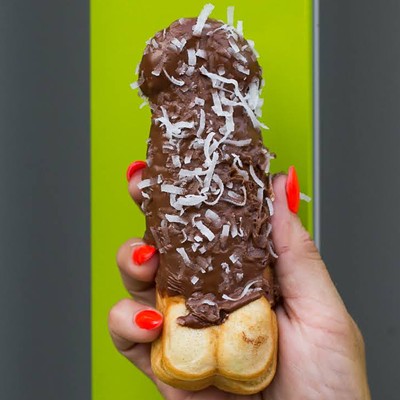