With its wonderful Japanese sandwiches, the restaurant shows why it was too good to be temporary 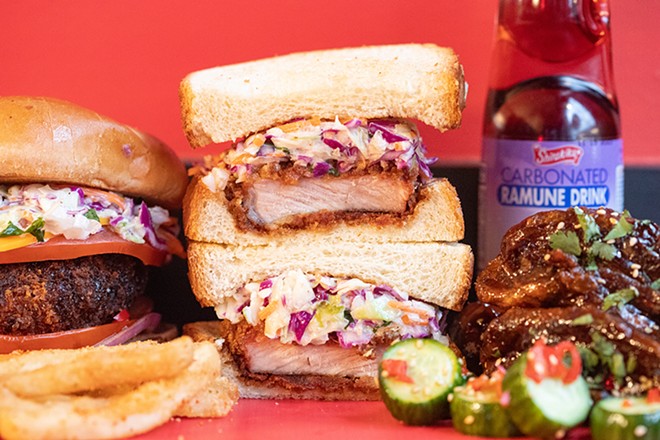 If things had gone according to plan, Amy Guo and Dan Jensen would never have opened Sando Shack (3173 Morgan Ford Road, 314-449-1011). Though the partners in life and business moved back to Guo's hometown from Seattle in July of 2020 to open a restaurant, it had nothing to do with Japanese sandwiches. Instead, their vision centered around Hello Poke, a fast-casual concept they were preparing to open at the then-forthcoming Food Hall at City Foundry.

Like everything in 2020, those plans got turned upside down when the pandemic threw a wrench into City Foundry's opening schedule. Though Guo and Jensen were originally scheduled to be part of the food hall's July 2020 inaugural slate of kitchens — and moved to St. Louis on that assumption — the opening kept getting delayed, leaving them twiddling their thumbs and without the income from Hello Poke they'd counted on. Fortunately, Guo was still remotely working the corporate communications job she'd held in Seattle, but Jensen was chomping at the bit to cook and looking for a way to pass the time while they waited. And waited. Disappointed by the ongoing delays and unsure of how long they'd be in limbo, Guo and Jensen decided that they needed to figure out a way to pass time.

Sando Shack was meant to be that meantime project, a pop-up brand they launched in the late summer of 2020 based on the Japanese sandwiches they loved to eat when they lived in Seattle. They figured they'd give it a go for as long as it took to get Hello Poke up and running, but it didn't take long for them to realize that might not be possible; the brand became a runaway hit, garnering a large number of followers who not only came out to eat every time they had an event but begged them to open the concept as a regular thing. 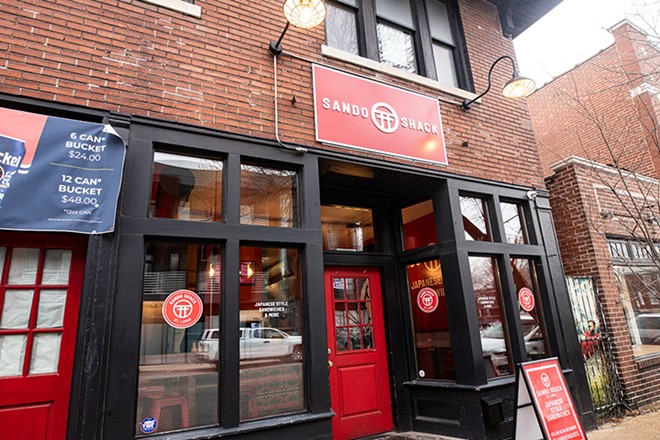 Mabel Suen
Sando Shack is located in the heart of Tower Grove South.

In the beginning, Guo and Jensen demurred, telling their patrons to get their sandwiches while they could because Sando Shack was only going to be a temporary thing. However, the questions never stopped, and as it became clear that the brand had taken on a life of its own, they decided to give the people what they wanted. In April of 2021, the pair launched Sando Shack as a food truck, rolling up at events, food truck parks and breweries around town and leaving a trail of fans everywhere they went.

The Food Hall at City Foundry — and Hello Poke — finally opened in August of that year, but Guo and Jensen could not justify shutting down Sando Shack now that it had become such a popular part of the St. Louis food truck scene. They admit that, because having two brands was not part of the plan, things got a bit chaotic at first, but eventually they got their feet underneath them and had things running well enough at Hello Poke to keep the truck going at full capacity.

This November, Guo and Jensen took the next step with Sando Shack, opening it as a brick-and-mortar storefront in the heart of Tower Grove South's Morgan Ford business district — a move that both allowed their fans to have a consistent spot to grab their favorite sandwiches and also finally gave Guo and Jensen a home base to prepare the brand's items. It's a small spot, with only a narrow window ledge and a couple of stools, but out of this tiny space the pair cook up mighty flavors that make you understand why people were clamoring for more. 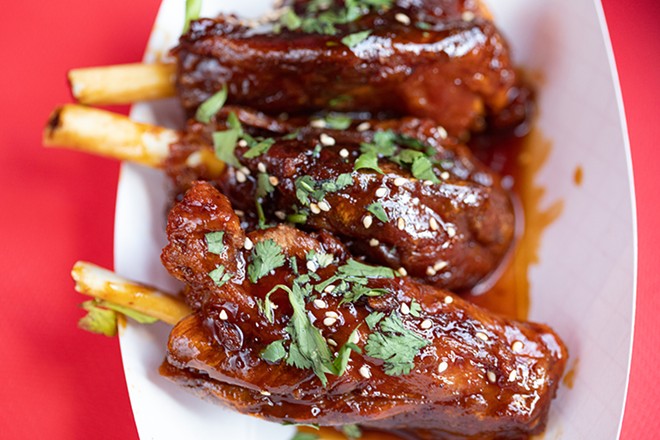 The bread alone is reason alone to become a superfan. Sando Shack uses Japanese milk bread, a fluffy, thicker, airier white bread that gets lightly toasted before it's stuffed with a variety of fillings. These include chicken katsu, a tender chicken thigh coated in seasoned panko and deep-fried, its decadence cut with refreshing cabbage slaw made with assorted julienne vegetables, Kewpie mayonnaise and wasabi. The pork tonkatsu — made from a thick, juicy, brined cutlet — is similarly adorned, though a mustardy coating underneath the breadcrumbs gives an extra punch.

Riffing on the spicy chicken sandwich craze, Sando Shack offers a sweet-and-spicy version of its chicken katsu, which is dressed in a medium-hot Sriracha and sweet-chili glaze. Here, the cabbage slaw does double duty of cutting through the deep-fried feel of the meat and providing a cooling effect to the heat. One of the restaurant's two side dishes, a cucumber salad, both adds to this refreshment and adds a little chili tingle, reminding you that the spice is there. It's a complex, delightful melange of flavors.

Sando Shack's most unique item is its katsu burger, a wonderfully rich concoction that is like if the quintessential American cheeseburger got crossed with bulgogi-marinated country-fried meatloaf. For this dish, the kitchen marinates ground beef in teriyaki, soy, ginger, garlic and cumin, coats it in seasoned panko and cooks it off in the deep fryer. The result is a magical — if not decadent — hunk of meat that has a crispy exterior but a shockingly juicy and tender interior. Topped with cheddar cheese, thick-sliced onion and tomato and cabbage slaw, the burger is both deeply familiar and its own thing all at the same time.

Pork wings — a plump, meaty mini pork shanks — are an excellent riff on the more ubiquitous chicken wing. Marinated, deep-fried and covered in teriyaki and sesame seeds, these mouthwatering wonders are the restaurant's sole appetizer; it needs no others.

As delightful as the pork wings, Sando Shack's piece de resistance is its chicken karaage sando, a brined and marinated chicken thigh dredged in potato flour and fried, giving it a unique, crispy-soft coating that beautifully clings to the meat. This magnificent fritter is outstanding on its own, but when topped with the cabbage slaw and thin slice of Fresno chiles, it becomes otherworldly. Between the deeply savory flavor of the meat, the slaw's brightness and the pops of heat from the chiles, it's the restaurant's most thrilling interplay of flavors.

For now, Guo and Jensen have suspended the truck's operations for the season and are focusing solely on Sando Shack's brick and mortar, along with running Hello Poke at City Foundry. However, they are fairly certain that when spring hits and food trucks again hit the streets, Sando Shack will be part of that fleet. Having three different operations might not have been part of their plan, but once you show St. Louis something as delicious as that chicken karaage, you can't ever take it away.