On Drink Masters, Barry, co-owner of Platypus, competes for $100K against other industry pros 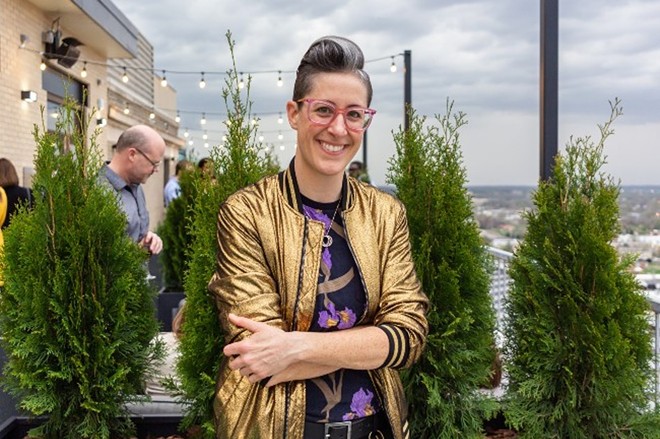 One of St. Louis' most respected bartenders is getting a national platform to show off her skills. Meredith Barry, co-owner of Platypus (4501 Manchester Avenue, 314-448-1622), will be competing on the new Netflix show Drink Masters, which premiers Friday, October 28.

Produced by the Canadian company behind the network's hit series Blown Away, Drink Masters follows 12 mixologists from across North America as they compete for a $100,000 prize and title of "Ultimate Drink Master." Similar to such cooking competition shows as Top Chef or Chopped, contestants on Drink Masters demonstrate their cocktail prowess through timed challenges, with one person being eliminated each episode.

"The level of stress is super heightened, so it's a matter not just of your skills, but of how you can take the stress test and if you have the endurance," Barry says. "Cameras are in your face. You have no idea what you are doing, but I get it; it's a lot on the line and it's high stakes. $100,000 is not going to come easy. You might be surrounded by some of the best talent, but you cannot control the elements. As good as you are, anything can happen."

For Barry, a veteran bartender who has worked in the industry for roughly 20 years, the idea of being chosen as part of such an elite group is humbling. As she explains, she wasn't even going to audition, thinking there was no way she'd make it through, and only submitted an initial application at a friend's urging. The reason for her hesitance, she says, comes down to feelings of doubt, a fear of talking in front of people, and general imposter syndrome issues that seem shocking to outside observers who see her as a master of her craft. However, the fears she had about doing the show were ultimately what propelled her to go for it.

"I've gone so far, but I still have this underlying self-doubt that is ingrained in me," Barry admits. "I'm continually working on it, because it's real and I still feel that way, even after 20 years in the industry. But my biggest lesson learned from this show is that fear and anxiety can take away your joy, and remembering your joy is the most important thing for anyone. If you love what you do, even if you are doing the scariest thing, remember your joy. If you forget that, it will be your biggest downfall."

Overcoming her fears was only one hurdle Barry had to face to get on the show. She describes a rigorous process that began with an application and cocktail challenge submission, complete with pictures and recipes. Once she made it through that round, there were additional challenges, each coming faster and more difficult than the last, followed by auditions and background checks. By the time she got the news that she was in, she'd been through nearly a six month process.

Still, it was nothing compared to being on the show.


"You walk in, and immediately they tell us we are going to do our first challenge," Barry says. "It's that fast-paced. They want incredible technique done in a short amount of time, so you have to be more than just an expert."

Despite the high-pressure conditions, Barry says that viewers should expect to be dazzled by the creations — not a surprise considering the level of talent on display in the competition. She describes being surrounded by people who are not only incredible bartenders; they have set the standard for the industry and are responsible for the way we drink today. This extends to the judges, including one of Barry's professional heroines, Julie Reiner, an acclaimed mixologist and bar owner who is one of the industry's most influential players.

Barry's supporters can watch her put up her wares in front of Reiner and company beginning this Friday, October 28, on Netflix. For those who want to show their support in person,  she urges people to come out on Friday evening to Platypus, the Grove neighborhood bar she owns with fellow bartender Tony Saputo. However people choose to cheer her own, though, Barry is just excited to be standing alongside a group of bartenders who have an undeniable passion for what they do.

"You're going to see stunning displays of cocktails and just pure artistry," Barry promises. "It's going to be absolutely beautiful, but you are also going to see the hospitality of all of us and the connection we made. The lesson I took away — besides not losing your joy — is how caring we all are of each other in this industry, how much hospitality means to us, and how personal these cocktails are to us. What we do is culinary, and this is the first competition of its kind for bartenders. You usually see chefs and pastry chefs. We are chefs, too."