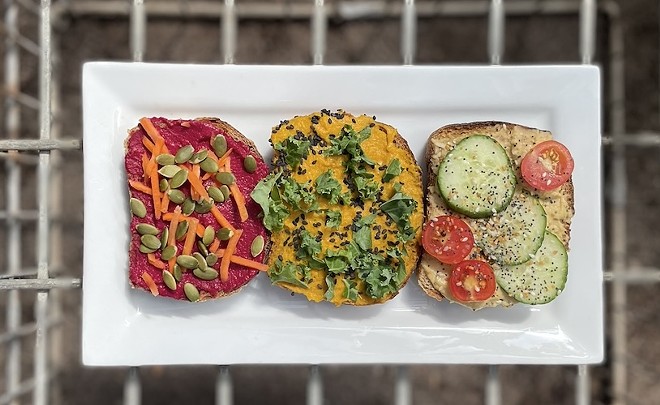 Courtesy of Maypop
Three varieties of hummus toast from Maypop are just some of the dishes available during St. Louis Plant-Based Restaurant Week.

Caryn Dugan, also known as "St. Louis Veg Girl," has been heartened by the number of plant-based living festivals that have sprung up around the country over the past few years. She thought it was high time for a restaurant week dedicated to that same lifestyle.

And so, she's launching St. Louis' first-ever Plant-Based Restaurant Week, which runs May 1-7. Dugan sees it not as simply a way to shine a light on the wide range of vegan cuisine available in the area, but to bring together diners of all dietary persuasions around the same table.

"I've watched the metamorphosis of this [plant-based eating] culture come to St. Louis and have seen how chefs, business owners and regular people have embraced it," Dugan says. "In my business as an educator, people come to me all the time and tell me they don't know where to start and ask how they go out to eat. That's the impetus around this — to get everyone around the same table without any stress."

After coming to a plant-based diet "kicking and screaming" roughly a decade ago, Dugan struggled not only to figure out recipes at home but to adjust her eating to dining out as well. She found her way by taking — and then teaching — vegan cooking classes at Whole Foods. Then, she dove headfirst into peer-reviewed research to educate herself on the lifestyle. After several years of immersing herself in the science of plant-based diets, she founded the Center for Plant-Based Living in 2019 as a way to help others on their journeys, no matter what stage they were in the process.

"I started thinking about all the people who adopt a plant-based diet and have reversed disease, but I wondered about those who went back to the way they were eating," Dugan says. "That's when I put on my hat and started looking at things from a different way. I figured that what they need is support. People just don't have the support they need, because all around us there are restaurants and bars and all these things working against that message. I thought, 'There has to be a place in town that could fill that bill and offer the support if people want it.'"

Since founding the Center for Plant-Based living three years ago, Dugan has been offering that support through education, classes, virtual programs and seminars. She sees next month's inaugural Plant-Based Restaurant Week as a chance to show those who choose a plant-based diet that they do not have to live in a bubble. Likewise, she hopes that those interested in vegan cuisine will see this as a chance to explore options in a fun and familiar setting.

"I really want to get people around the same table," Dugan says. "Often, there will be a situation when a plant-based person will say, 'Well, I can't go to Mike Duffy's for happy hour because they aren't going to have anything for me,' and they also might be hesitant to take non-plant-based friends somewhere because they are afraid they won't like it. When you are around someone who has changed their way of eating, there is a little anxiety, so that's why we are 'back-door-ing' this by going to restaurants that might already have a plant-based option on the menu and highlighting it."

For this year's event, Dugan is starting out small, focusing on restaurants in Kirkwood and Webster Groves. So far she has twelve different eateries confirmed, including Balkan Treat Box, Mike Duffy's, Mission Taco Joint, Clementine's, Robust, and Sunset 44 the Frisco Barroom, with more establishments being added every day.

Each restaurant will either highlight two or three plant-based dishes that they currently offer or create new ones specifically for the restaurant week. There are no tickets or advanced reservations required; Dugan encourages people to simply head to any participating restaurant, ask for the Plant-Based Restaurant Week offering and have a good time.

"We want this to be a win-win-win for everybody," Dugan says. "We want to show people that they have an opportunity to go back to 'regular' restaurants and eat whatever, because they will have something for both the plant-based and the standard diet. Let's all just sit around the same table and have a good time."

Note: This article's headline has been updated; it inaccurately stated St. Louis was hosting the nation's first plant-based week. We regret the error and apologize for it.