The beloved sandwich shop has been feeding St. Louisans since 2004. 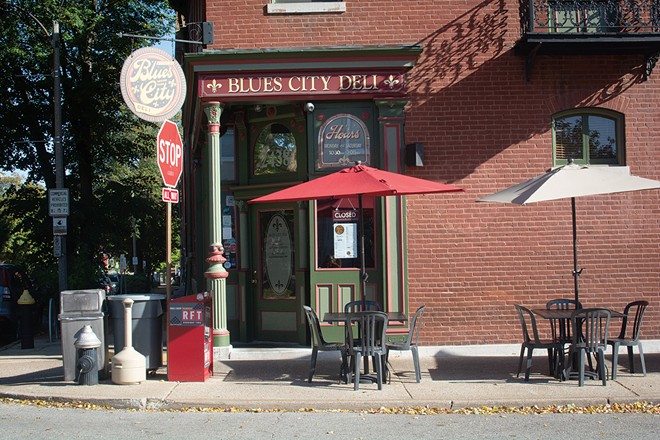 If you ask Vince Valenza for the origin story of Blues City Deli (2438 McNair Avenue, 314-773-8225), you might think it begins with a fateful trip to New Orleans for a work conference that inspired him to begin making muffalettas at home, or even his turn as a blues musician, which gives the deli its musically inflected spirit. In actuality though, the roots of the sandwich shop go much deeper.

"It goes back to when I was a child — not that I thought I was going to open a deli someday, but because we had this tradition on Saturdays of sitting around the table for lunch," Valenza explains. "It was a casual day. I was five or six and would get out of bed and help my pop go shopping or do some work outside. My mom and sisters would be doing stuff around the house, and we'd all meet at the table for lunch. The Volpi genoa salami would come out, bread from Valenti's in Jennings, olives, cheeses and whatnot. It was just something we did every Saturday, and when I got married, we tried to continue that tradition. In the back of my mind, it was just part of me."

When you walk into Valenza's beloved Benton Park shop, Blues City Deli, you can feel the through line from these childhood lunch-table experiences to what he and his team have created. For the past 18 years, Valenza and company have dedicated themselves to creating more than delicious sandwiches — they are giving their guests the intangible feeling that comes from enjoying simple, good food prepared by people who know your name, have your order memorized and let you know that they are truly happy you're in their lives. It's a culture Valenza has not created by order but one that has sprung up organically thanks to the entire Blues City Deli team's buy-in into what they are doing. 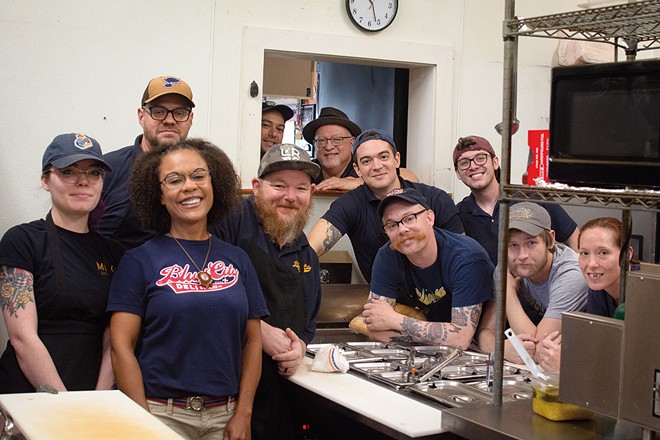 Andy Paulissen
The crew, including owner Vince Valenza (back right) and his son Vinnie Jr. (back left), take a pause before opening.

However humbly Valenza deflects credit for creating such an environment, there is no question that his personal journey into the restaurant business has informed Blues City Deli's hospitable atmosphere. Growing up in north county — Jennings, to be exact — Valenza was surrounded by quality family-run eateries; Ponticello's, Angelo's, Saullo's and Domenico's defined the area's Italian American dining landscape and crystallized in Valenza what a good restaurant should be.

It also sparked in him a passion for the restaurant business, but it would take him a while before he scratched the itch. Instead, straight out of high school, he got a job with Xerox and worked for the company until it closed its St. Louis distribution center in 1983. Valenza was offered a position at Xerox's Texas location, but his dad has just been diagnosed with stage 4 colon cancer. Leaving town was not an option, so he got into the hair-cutting business thanks to a connection through some friends. It was a good gig, but he could not shake the feeling that he was meant for something closer to his heart.

"All that time, I kept thinking that I wanted to get into food," Valenza says. "I mentioned to my wife that I wanted to open some sort of Italian cafe and get back to my roots, so I talked to [my friends] who opened Fratelli's in Dellwood. I told them I was thinking about doing this and asked if they could sit down with me sometime to go over basic things I'd need to know. They said, 'Why don't you just come work for us?' That's where I fell in love with it."

Valenza may have worked at Fratelli's for only a year, but it was enough time for the restaurant industry to get into his blood. Even after he left because he needed to find a more substantial income — working in the hair-cutting business again and at a playground equipment manufacturer — Valenza could not shake the feeling that he was being called to open a restaurant. That inkling became a full-fledged urge after a business trip to New Orleans sparked in him a connection between food and music that inspired his vision for what would become Blues City Deli. 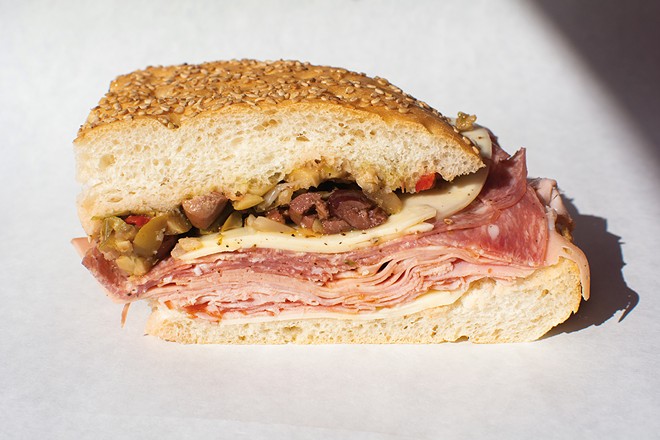 Valenza spent the few years following those trips developing recipes at home, perfecting his sandwich game and sketching out ideas for how he would base a sandwich shop around the famed Blues Highway (U.S. Highway 61 that extends from Wyoming, Minnesota, to New Orleans). Eventually, he felt that he was ready to launch the concept, so he made plans to open up in Florissant. They fell through, as did his second plan to bring the idea to St. Charles County, so he began making plans to do a Blues City Red Hots hot-dog cart in Soulard instead. He got so far as asking his friend, a fellow blues musician, for help with his website, but instead, he got a tip on a building for rent in Benton Park.

"Everyone knew I wanted to open Blues City Deli, so he said to me, 'Vinnie, this building across the street has been sitting empty for a long time; you ought to take their number and see, because it might be reasonable,'" Valenza recalls. "I told my wife, and she was like, 'Here we go again,' but then I took her to look at it, and it was so cool-looking, she said OK."

Valenza opened Blues City Deli in October of 2004, surrounding himself with a team that he credits with expanding on his original vision to make the place what it is today. From its wildly popular sandwiches to its live music shows (which have yet to resume after they paused during COVID-19), Valenza and his team have been giving their guests a transportative experience for nearly two decades, and he believes the restaurant thrives because of its collaborative nature. Though he began with a core sandwich menu and a certain idea of how things should work, the deli has evolved over time thanks to the creativity of his employees, who take ownership in its success. 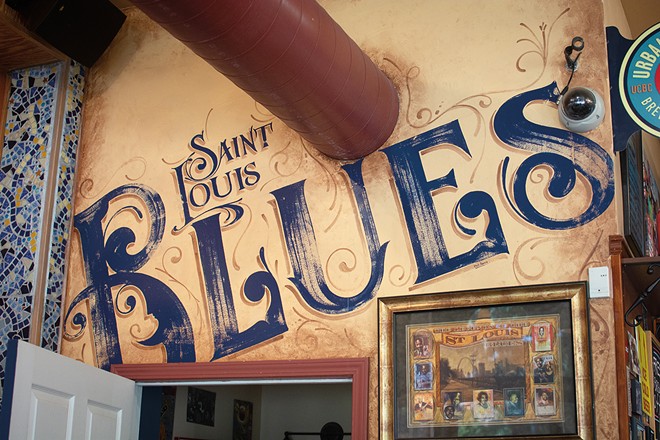 Andy Paulissen
Blues City Deli thrives on the creativity of its employees.

"We have so many longtime employees that have given their all and work hard," Valenza says. "The older I get, I can really see what they are doing more and more; they have ideas and share and brainstorm. It's like they are thinking about the deli's success and about ways to make the deli better. If I would've been there just calling the shots, none of this would've happened. I'm so proud of them."

If Valenza is proud of his team for their efforts in helping him build the deli into the success story it has become, he's even more thrilled with the culture they have created. He believes the key to their staying power has to do with centering the customer and building relationships, even if it's only for the minute or so they interact with their guests. If they can continue to do that, then they will continue to be a vital part of St. Louis food culture for years to come.

"This is a 'we' place," Valenza says. "I always tell my team that I am not paying their salaries; the customers are. I'm just writing the checks. It's them that we have to tip our hats to and take care of. When you make people feel good and are respectful of them, you start to build something. There is a path, and we are following it by letting people know that when we make food we put our soul into it."