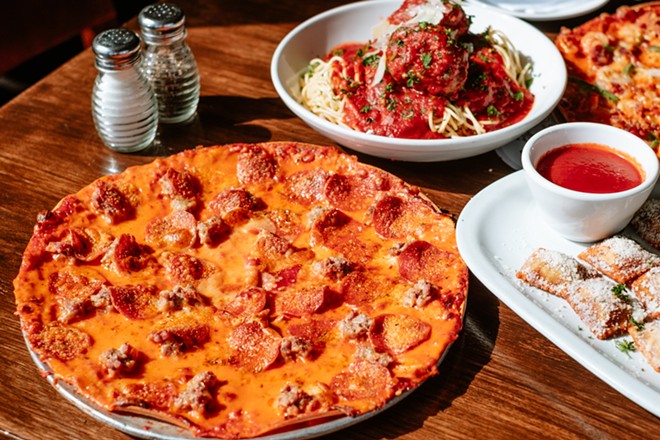 Phuong Bui
Farotto's is one of the area's original St. Louis-style pizzerias.

Jeffrey Parrott is humble when he talks about Farotto's (9525 Manchester Road, Rock Hill; 314-962-0048), the restaurant he runs with his sisters Lindsay Parrott and Lisa LaRuffa. Though there's no question the Rock Hill institution was one of the trailblazers of St. Louis-style pizza, he's quick to note that at least three other pizzerias came before his, and that they were all wonderful in their own right. However, if there is one slice of Provel-inflected lore he will put his foot down about, it's that the square cut that's come to define the Gateway City's pie started more than a decade before Imo's.


"Everyone has heard the story that Ed Imo used to be a tile-layer, so when he founded Imo's he decided to cut the pizza into squares," Parrott says. "I can say with certainty that's not true. Imo's opened in 1964. We've been here since 1956 and have been cutting it that way ever since, and there were other pizzerias like Cusanelli's and Melrose that were doing it before us. People say it's an urban legend, but it's no longer one. We've debunked it."

Though Farotto's — or Imo's for that matter — cannot lay claim to being the inventor of St. Louis-style pizza, there is no denying the longtime Italian restaurant's impact on the area's food scene. Founded 66 years ago by Parrott's uncle, Lou Farotto, the Rock Hill spot has developed a following over the decades for its ability to translate the experience of having Sunday supper at an Italian grandma's house to a restaurant dining room. Anchored by its pizza, red sauce and signature salad dressing, Farotto's has helped to define the St. Louis Italian subgenre to generations of diners. 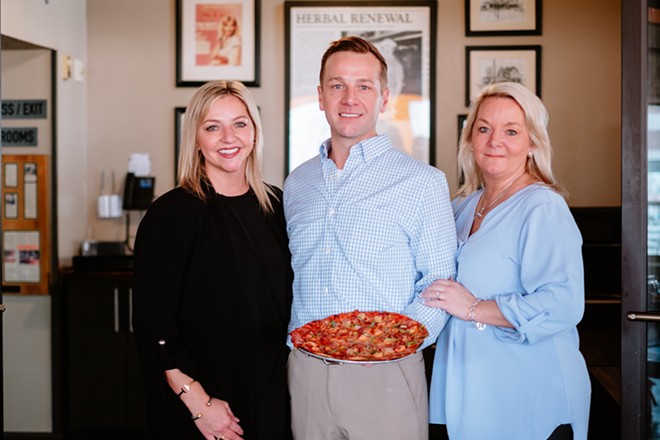 When Uncle Lou founded the restaurant, he had a much more humble vision: to provide for his family after an injury thwarted his promising baseball career. A talented ballplayer who was in the minors with such greats as Stan Musial and Joe Garagiola, Lou Farotto's career was cut short when he busted up his knees and could no longer play. Drawing upon his northern Italian heritage — his parents were from the old country — he decided to jump into the city's nascent pizzeria scene, figuring he could stand out from the crowd by infusing his menu with old family recipes.

Farotto found his Rock Hill location when he was out for a drive one day. Originally intended as a doughnut shop, the building had been put up for lease after the proprietor fell ill before he could open it. Farotto jumped on the spot and in no time turned it into a thriving restaurant, complete with carhops and delivery. After two years, though, he discontinued those services to focus on the dining room, which had become wildly popular.

"It was an instant success," Parrott says. "People came to him, which was a tribute to what he was putting out." 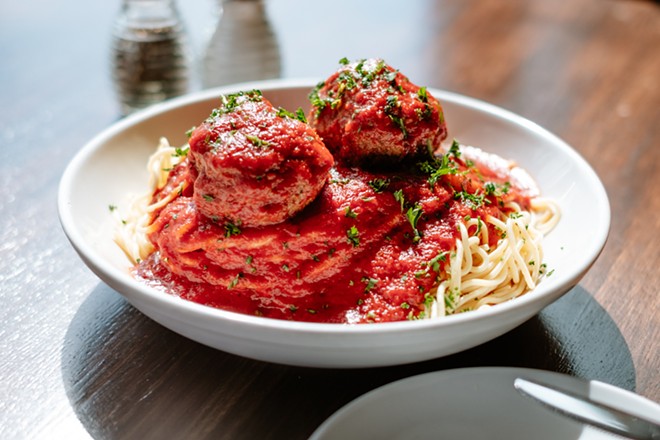 Phuong Bui
Farotto's prides itself in its red sauce, toasted ravioli and pizza.

Parrott's father got involved in the business at an early age after his sister married Farotto. By the age of ten, he was riding his bike from his home in Dogtown to work in his brother-in-law's restaurant in order to support his mother. He earned his stripes at the restaurant over the years and eventually entered into a partnership with Farotto until he bought him out in the late 1970s. Under his watch the restaurant grew in size, and even attempted a franchise operation in Phoenix in 1985 that ended up being short-lived.

"It was the same year the football Cardinals moved out there," Parrott says. "I remember one of the reviews said that we could take our Provel cheese and our Cardinals back."

Aside from the processed-cheese backlash in Arizona, Farotto's thrived under Parrott's father's ownership and maintained itself as a family business. Together with his sisters Lindsay and Lisa, Parrott grew up in the restaurant and realized at an early age that it was likely his destiny, even if he jokes that he was not always at peace with that and had tried his hands at other industries before dedicating himself full time to the business.

"Like a lot of things, it's a love-hate," Parrott says. "The hospitality industry just kind of gets in your blood, though, and it's been so prosperous that it's hard to pass on a good thing. My sisters and I have all tried different industries and have found ourselves coming back to what we know and what we love to do."

Phuong Bui
The bar at Farotto's is a neighborhood gathering place.

Parrott and his sisters do not only feel a responsibility to their family in keeping Farotto's going; they know how much their restaurant means to their longtime guests. If Parrott ever needs a reminder of that, he makes sure to work behind the counter on the day before Thanksgiving or the couple of days before Christmas when longtime guests who now live out of town make their pilgrimage to the restaurant — sometimes before even stopping to check in with their families. "It's funny, but it's also really neat and loving how many times someone says that they haven't been home to see their mom yet, but they just had to stop here to get some food on the way," he says. "It's touching when you hear that."

Though he is confident in the quality of food he and his team put out, Parrott knows that there is more to why people have been packing into the Rock Hill mainstay for years. He likes to say that Farotto's "is not the place for a culinary explosion," meaning he does not see the restaurant as some bastion of fine dining. However, he confidently notes that if a diner comes there in search of the best spaghetti and meatballs of their lives, they will leave satisfied — just as they have been for nearly seven decades and hopefully will for many more.

"As I've gotten older, it's been really neat to see adults come in who were kids when I started working there," Parrott says. "Now, they come in with their kids and their kids' kids. It's fun to see all the generations of the same families. We've got them hooked, which is a tribute to us, but we are so grateful we have been able to do that."