The restaurant is known for its cheap, delicious food and striking murals 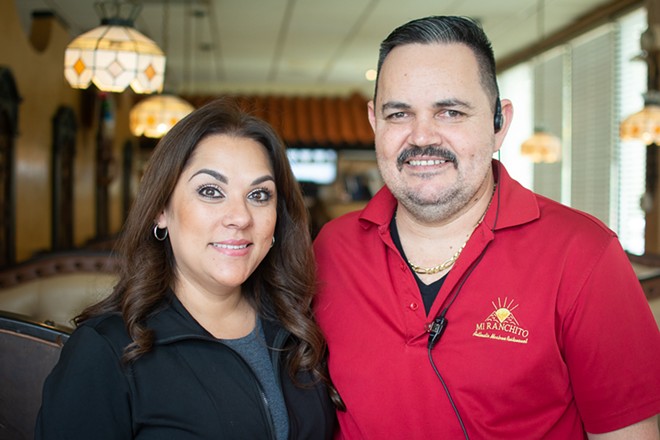 
It's lunchtime, and despite only opening 20 minutes ago, Mi Ranchito (887 Kingsland Avenue, University City; 314-863-1880) is already bustling. A large group of office workers are celebrating a birthday, police officers pop sunglasses on top of their heads as they trickle in. In a nearby booth, a young woman is showing pictures of a guy she went out with to her friends.

The beloved University City restaurant sometimes has a line before it even opens. It is known for being a place you can still get a lunch or dinner for an astonishingly good price, its almost preternaturally swift service and its murals. 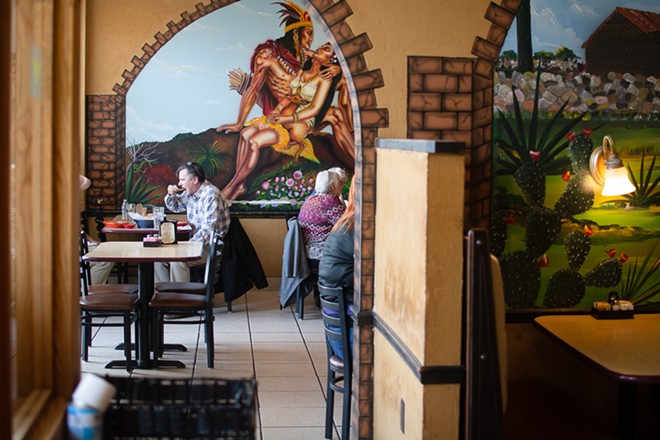 ANDY PAULISSEN
In addition to the food, everyone remembers the striking murals in Mi Ranchito.

Ah, the Mi Ranchito murals. In one room, they depict fit, bronzed Aztec gods with toned abs. Some of the paintings would fit perfectly on the cover of a romance novel. In the main dining area, however, the murals feature a Mexican family in traditional dress on a ranch.

Alicia Aguirre Jimenez, who runs Mi Ranchito with her husband Andres Jimenez, says that those murals are of her grandmother's ranch, where her mom grew up in Jalisco, Mexico.

"It's supposed to represent family," she says. When you come into Mi Ranchito, Alicia wants "people to feel at home here." And at the restaurant, cozy is the vibe. It's informal, unpretentious and has a menu full of comfort food. It's fitting since Mi Ranchito is part of a legacy of family restaurants.

The Aguirres are a family of restaurateurs. After moving to Virginia from California, Alicia's maternal uncle opened El Ranchito, a Mexican restaurant that drew on the dishes her family had grown up making and eating in Mexico on grandma's ranch.

"Coming from big families, [my parents] always had to make food for everyone," Alicia says. And when the restaurant opened in Virginia, her uncle also developed some recipes. El Ranchito became "a mixture of several different recipes from different family and friends in Mexico," Alicia explains.

El Ranchito didn't take off right away. "There were no Mexican restaurants in that town in Virginia," Alicia says. For people who had barely heard of a quesadilla, some of the dishes on the menu were exotic because they came directly from Jalisco. For example, the carnitas — tender, perfectly seasoned pork tips that come with rice, guacamole salad, pico de gallo, jalapeño, lime and tortillas — is a Jalisco dish that few had encountered before. Now, the dish (which is also in St. Louis) is popular, but it took people a while to give it a try.

Still, Alicia's father, José Aguirre, soon followed his brother-in-law to Virginia and opened Mi Ranchito in 1990. Despite the similar names, both El Ranchito and Mi Ranchito are still in operation. 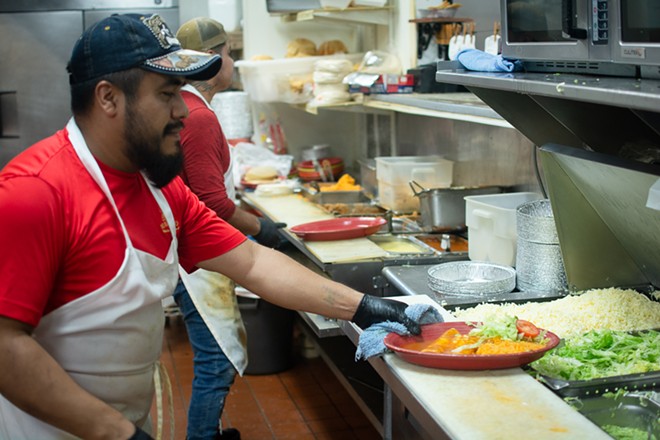 Alicia estimates that her family owns above two dozen restaurants throughout the country, including in North Carolina and Missouri. Not all of them are named Mi Ranchito (or El Ranchito), and the opening of Mi Ranchito in St. Louis was not a foregone conclusion. When the idea for St. Louis' Mi Ranchito started, Alicia actually was working on another restaurant with another family: her husband's.

Andres Jimenez has a lot in common with his wife. They met in Jalisco on vacation. Their parents share a hometown, and both are steeped in the restaurant industry. Andres' family owns San Jose in South Carolina, as well as restaurants in Atlanta. After the two met in the late 1990s, Alicia and Andres carried on a long-distance relationship for a number of years as they helped their parents with their respective restaurants. After marrying in 2000, Alicia started helping her husband with his family's business.

One charge? To see about expanding San Jose into St. Louis.

Both families will visit cities to see how many Mexican restaurants already exist there. If they see a dearth, they will consider expanding. Back in the early 2000s, St. Louis was ripe for a Mexican restaurant. Alicia and her husband saw the space that is now Mi Ranchito in early 2005. At the time, it was raw space in a newly built strip mall.

Andres' uncle was offered the storefront for his restaurant but passed. Andres and Alicia decided to take the plunge and open a place of their own. 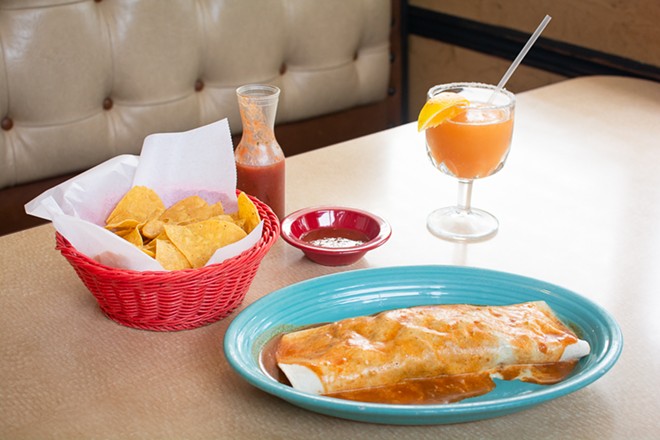 ANDY PAULISSEN
Mi Ranchito's Burrito California is a standout on the restaurant's menu.

"I was working at age 12 helping my parents in the restaurant," Alicia recalls, "And we felt Mi Ranchito felt more cozy and more inviting." So when it came time to pin down a concept, she went with her family's Mi Ranchito. But both of their fathers, both named José, helped with the restaurant, particularly with the recipes.

Alicia says things started slow, but soon the WashU crowd and families looking for an inexpensive dinner started showing up. "When weekends weren't weekends anymore, and we were busy at all times," Alicia says, "I knew we were going to make it."

Then wait times started getting out of hand, and Alicia and Andres knew they had to expand. Space was still available in the strip mall, so the restaurant added on a "party" room to seat large groups.

With the addition came the murals. Alicia's family had added them to El Ranchito, so she wanted them in her place. She often draws from her family's restaurant for ideas.

"If we see something is working out over there, and I go try it out when I visit, I'm like, 'Hey, can I have the recipe to this?'" Alicia says. The St. Louis restaurant will also share recipes that prove popular with the other locations.

With the newly expanded Mi Ranchito in place and business doing well, Alicia and Andres considered opening another restaurant, but after the pandemic hit, they were grateful they hadn't. Staffing shortages, a new to-go system and now inflation have hit the restaurant hard. Alicia says Mi Ranchito strives to keep prices low because "we want someone to get a good meal at a good price," but it's been difficult.

While they didn't expand Mi Ranchito, Alicia and Andres did buy a friend's restaurant, Tequila Mexican Restaurant near Arnold. Andres' brothers run it. Is it the start of Alicia's Missouri branch of the family empire? She's not sure, but her college-aged daughter works as a hostess in the summers, and her six-year-old has a Mi Ranchito shirt she wears to the restaurant because she likes to think she's on staff. So the restaurant gene seems to be running in the family, which is good because that's what Mi Ranchito is all about.

Rosalind is the editor-in-chief of the Riverfront Times. She formerly worked for Washington University's alumni magazine and St. Louis Magazine. In 2018, she was selected as a Rising Leader of Color by the Theatre Communications Group. In 2014, she was selected as an Emerging Leader by FOCUS St. Louis. Her work...
Read More about Rosalind Early
Scroll to read more Food & Drink News articles (1)