Our weekly roundup of our favorite St. Louis dishes 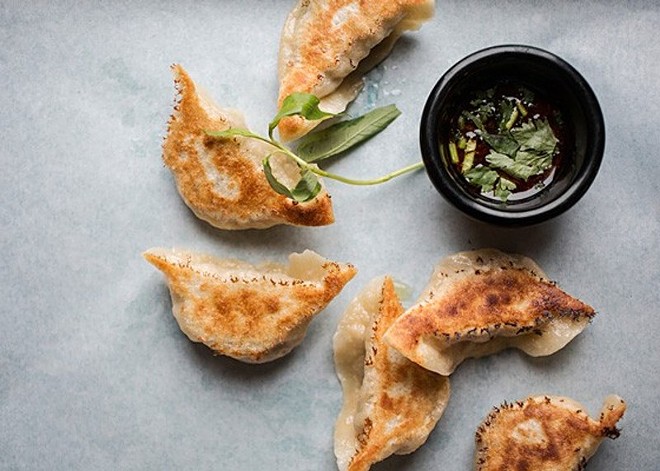 Jennifer Silverberg
Dumplings from Lona's Lil Eats
This week, we are excited to launch 5 Top, a weekly roundup of some of St. Louis' most notable dishes, as chosen by our dining critic, Cheryl Baehr. Every Monday, Cheryl will bring you her picks for what to eat when you crave a certain dish, whether that be St. Louis style pizza, arancini, empanadas, or in this week's case, dumplings. Happy eating!

As the lights of the holiday season go dark and the cold air seeps into our bones, there’s nothing better than a steaming hot dumpling to battle the winter blues. These soulful, savory wonders offer the most delicious kind of respite. Here’s where we’re enjoying them.

Soup Dumplings STL
The soup dumplings at Soup Dumplings STL are, as is typical of the form, a feat of engineering; the wonton wrapper is so delicate you wonder how it holds such steaming hot jus and fillings, yet it somehow does until strategically pierced with a chopstick, revealing mouthwatering savory nectar and meat. The pork and crab version is positively transcendent.

Sides of Seoul
This casual Korean spot offers an embarrassment of Korean snack riches, but the mandoo is a can’t-miss offering. Filled with ground pork and lightly fried, these stuffed wonders soothe the soul.

Lona’s Lil Eats
Before she was a James Beard-award-nominated chef with one of the most popular fast-casual storefronts in town, Lona Luo made a name for herself selling dumplings at the Soulard Farmers Market. One taste of her handiwork, and you understand why they propelled her to greatness. Peppery beef and smoked mushrooms provide a delectable filling, and the accompanying chile-sesame vinaigrette is positively addictive.

Tiger Soup Dumplings
If you find yourself craving soup dumplings in the southwest portion of the metro area, Tiger Soup Dumplings has you covered. Operated by the family behind Soup Dumplings STL, this Fenton restaurant takes its sister spot’s signature dish as a jumping-off point, offering different ingredients and the ability to have your dumplings pan fried in addition to just steamed.

Corner 17
The delicate, silken wrappers that make up Corner 17’s handmade wontons with housemade chili sauce are themselves stunning. When filled with succulent pork, and soaked up with hauntingly delicious sesame chili sauce, they became otherworldly.