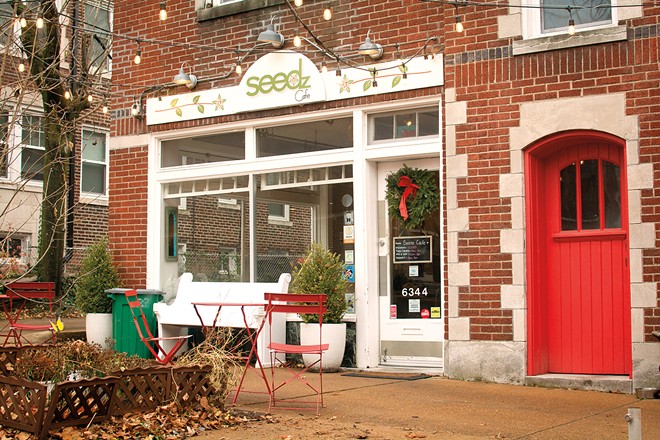 Andy Paulissen
Seedz Cafe has been a St. Louis institution since it was established in Demun in 2012.
Cara Moon Schloss glows. Her blond hair is long and thick, and her blue eyes beam out from behind chunky, square-framed glasses. Long rainbow-colored beaded earrings — available for sale at her business Seedz Provisions — swing gently by her shoulders as she talks.

Schloss, 53, is the mother of four daughters, ages 14 to 27, and she exudes vitality — a walking advertisement for the food she sells.

She's been into healthy eating since she was 17, when she was introduced to the concept of natural healing through a boyfriend's mother, and it shows. For a decade, she's been sharing that knowledge with St. Louisans through her beloved Demun neighborhood vegan spots.

Schloss opened the Seedz Cafe (6344 South Rosebury Avenue, 314-725-7333) in 2012 along with her partner, Monty Gralnick. At the time, the duo had been living in Santa Barbara, California, where healthy eating trends were already had a grasp on local food culture. But Schloss and Gralnick wanted to open a vegan cafe in their hometown, St. Louis — the city of gooey butter cake and barbecue. 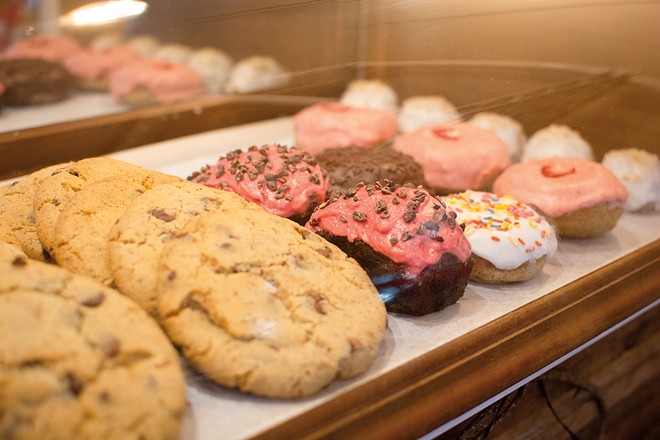 Far from being nervous, Schloss and Gralnick were excited to bring their ideas about whole food cuisine to the Midwest. "We were like, 'There's kind of nothing here, so let's bring something healthy and cool,'" Schloss says.

However, Schloss was also adamant that Seedz Cafe still be an approachable place for all types of people, not just health junkies.

"We wanted to create a space where you didn't feel like you were going to a health-food restaurant, where the food was just naturally healthy, but it was also kind of a cool place to go have dinner on a date or even have a cocktail," Schloss says, pausing. "Some people don't agree with having cocktails ... but we're in St. Louis. In the Midwest, you have to have cocktails."

The origin story of the name Seedz differs depending on who you ask. If you ask Gralnick, he'll say it's an homage to Shel Silverstein's The Giving Tree, which details a generous relationship between a tree and a boy. Schloss, however, explains that "Seedz" simply encapsulates what they serve, referring to the abundance of plants — and yes, seeds — that are the basis of many of their menu items. "'Seedz' kind of found us," she explains.

Gralnick and Schloss work well together, though the lack of space between home and work life can be tough. "I wouldn't recommend it for just anybody," Schloss says. She describes herself as "hands on" with employees, customers and food. Gralnick works more behind the scenes, tackling bills, taxes and accounts. They balance each other. "If it were up to me, I would just give everything away," Schloss says. "Like, 'How much do you think this should cost?' Where he's like, 'No, this has to be this [much money].'" 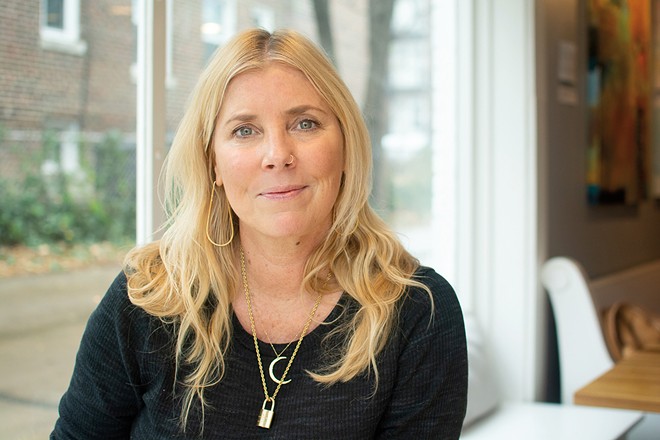 Seedz has two franchises: Seedz Cafe and Seedz Provisions. The cafe is a cozy space that caters more to sitdown meals and drinks. Provisions, two doors down from the cafe, is a bite-sized vegan coffee shop, which sells coffee, tea drinks and animal-product-free desserts alongside vegan soaps and candles.

At the start, Seedz offered only a small menu, mostly juices and smoothies. These days, the options are much broader. For such a small space (only eight small tables in the cafe), it's astounding how many different meals and drinks can appear from the kitchen.

The menu varies by season. As the holidays approach, favorites include Mac-N-Cheez, a variety of grain bowls and vegan meatloaf. Without examining the ingredient lists, it's not immediately obvious that everything is free of dairy, eggs and meat.

On a recent Wednesday afternoon, the cafe is half filled with couples on dates and college kids sipping banana-strawberry-date smoothies and scribbling in notebooks. Colorful abstract paintings fill one wall, while another is painted red with "LOVE" in massive black lettering. Potted plants and Christmas garlands fill the remaining wall and shelf space. A funky jazz beat plays low in the background, just loud enough to drown out the clanking pots from the postage-stamp-sized kitchen in the back.

Two men walk in and listen to the cashier's favorites: the black-bean burger, a tempeh reuben ... they look at each other doubtfully. "This is all vegan?" one asks. Ten minutes later, they're happily scarfing down bowls of chili mac and sipping brightly colored tap kombucha. 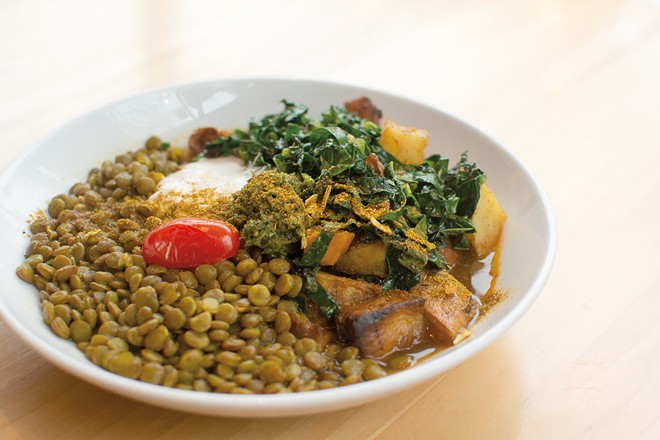 The food appears in shallow white bowls, artfully plated. The Vandovan Bowl, a seasonal special, is hearty and flavorful with turmeric-spiced lentils, sweet potatoes, cashew cream and cilantro chutney. Everything is generously spiced without overpowering the base ingredients.

The cheesecake flavors also vary by season and week. It's possible that someone who didn't know the chocolate-peanut-butter slice was raw and gluten-free would never guess it. It's thick, and just as rich and filling as any dairy-filled replica.

The Seedz employees — who act as anything from baristas to waitresses and cashiers — mirror their clientele: mostly young people with fashionable, casual clothing. You don't have to be vegan to work there, but Schloss says she looks for people who are creative and relaxed — and have some experience with plant-based food.

Seedz occupies Schloss' mind at nearly all hours of the day, and even sometimes after the daylight hours end. "It can be in the middle of the night sometimes, [and I'll] wake up stressed out about a situation and have to talk about it," she says. Recently, Schloss has been trying to draw some boundaries with her time. "I'm trying this new thing where I turn my ringer off," she says, smiling sheepishly.

The shop is closed on Mondays, but Schloss says she works seven days a week. She's usually up at 5 a.m., heading to a spin class. Then she'll drop her youngest daughter off at school and head into the shop.

The mornings are reserved for putting out small fires and making sure everything is in order when customers start to arrive. Schloss eats food from Seedz nearly every day, usually lunch. "I can't even believe how much I love it," she says. "Every day I smell something, and I'm like, 'Oh, my God, that smells so good.'"

Andy Paulissen
Schloss is hands on with every aspect of the business.

After picking her daughter up from school, Schloss will head home and start on the administrative duties of owning a restaurant –– sending emails and filling out paperwork. Seedz is still slowly coming back from pandemic hits, where it lost 70 percent of sales and a handful of employees. With her optimistic outlook, however, Schloss doesn't call it "recovering."

"It's just the way that it is," she says. "It's good to have change. You just have to figure out how to bend with the wind."

Restaurant life, even after nearly a decade of it, is overwhelming. Schloss is still taking it a day at a time. "Just when you think that you don't want to do this anymore — because you can't handle any more of the restaurant drama or the stress or whatever it is — somebody really awesome walks the door and says, 'Thank you,'" she says.

Schloss says she doesn't know what the next couple of years will bring for Seedz. For now, she and Gralnick are content continuing to make and sell vegan food to the St. Louis masses.

"I'm definitely not making the big bucks," she says. "I'm just ... I'm here. My form of activism is serving healthy food with a lot of love."