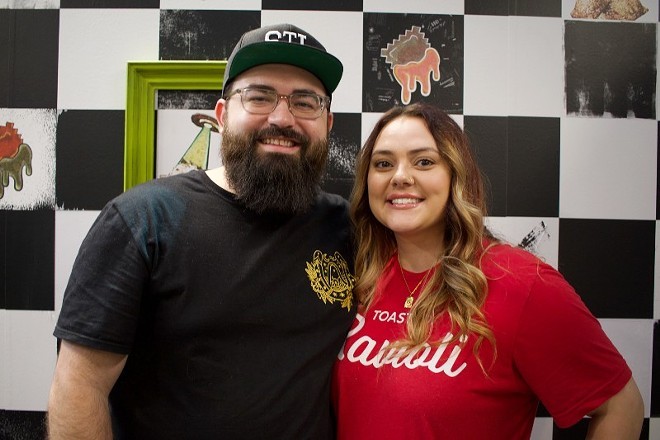 Cheryl Baehr
Husband and wife Matthew Fuller and Brittany Abernathy are excited for STL Toasted's next chapter.
A new St. Louis ravioli brand is preparing to take over the space once occupied by a storied t-rav legend: STL Toasted (3739 Foundry Way), the one-year-old toasted ravioli concept founded by Brittany Abernathy and Matthew Fuller, has signed a lease on the building at 2201 Macklind Avenue that formerly housed Mama Toscano's. The husband and wife team plan on initially using the building as a production space for their City Foundry food stall, with an eye to eventually including a retail market.

"When we walked into the building, we both thought the same thing, that there is so much history in this building surrounding ravioli," Abernathy says. "It's set up for ravioli manufacturing. We looked at each other like, 'Is this happening?' We were going to be heartbroken if it ended up not working out because it was tugging at my heart as soon as we walked in. It just felt right." 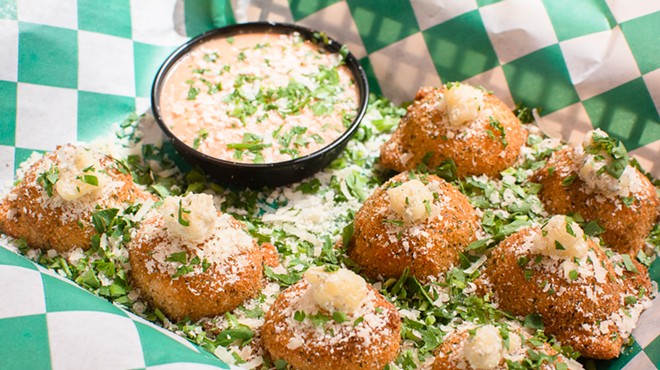 
For Abernathy and Fuller, the new lease comes on the heels of a successful four months spent running their STL Toasted food stall at City Foundry. The brand, which opened on May 31, was the couple's brainchild following a difficult 2020 that forced Fuller to pivot to a new career path because of a serious car accident. They've been met with immediate success — so much that keeping up with demand has pushed their small kitchen to its limit.

"We knew we needed somewhere else to produce because we were out of space," Abernathy says. "We were already thinking about potentially renting space at a commissary or looking into other production spaces because others at the Foundry are doing the same thing."

As Fuller explains, the couple had not yet settled on the idea of renting a commissary space because it did not fit their needs. Because their ravioli-making process is so time-consuming, they worried that it would not be cost-effective to get into a commissary's hourly fee schedule. However, as he and Abernathy were forced to turn down lucrative catering and events orders because they lacked capacity, they realized they had to do something. That's why it felt like fate when he was driving by the former Mama Toscano's building and noticed a "For Lease" sign. The next thing they knew, he and Abernathy were touring the building with a realtor and signing on the dotted line. 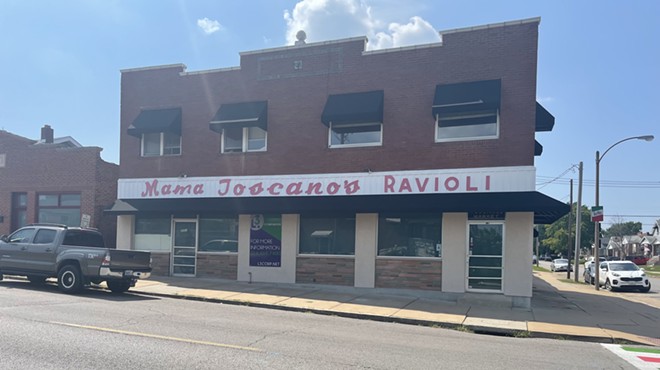 Hill Staple Mama Toscano's Closes After More Than 100 Years: The building is now up for lease


Though Abernathy and Fuller are excited for the extra production space and opportunity to have a retail outlet, they will not be using the space for second STL Toasted restaurant; as part of their contract with City Foundry, the pair are not allowed to open another location within a five-mile radius of the food hall. For now, the pair are content with that arrangement. As Abernathy explains, they are busy enough trying to manage what is already on their plates but are excited that one of those tasks is serving as stewards of a St. Louis ravioli legacy.

"I keep saying, 'One thing at a time,' as we take on more things," Abernathy laughs. "It does feel like we are taking on a lot so quickly, but it also feels destined. We were talking with [the former Mama Toscano's owners] yesterday, and they are the sweetest couple. They also felt the same way — that this was meant to be. It felt really reassuring."