As ‘Ellen the Felon,’ She Nearly Drank Herself to Death. Now Ellen Hilton Cook Just Wants to Be Ellen 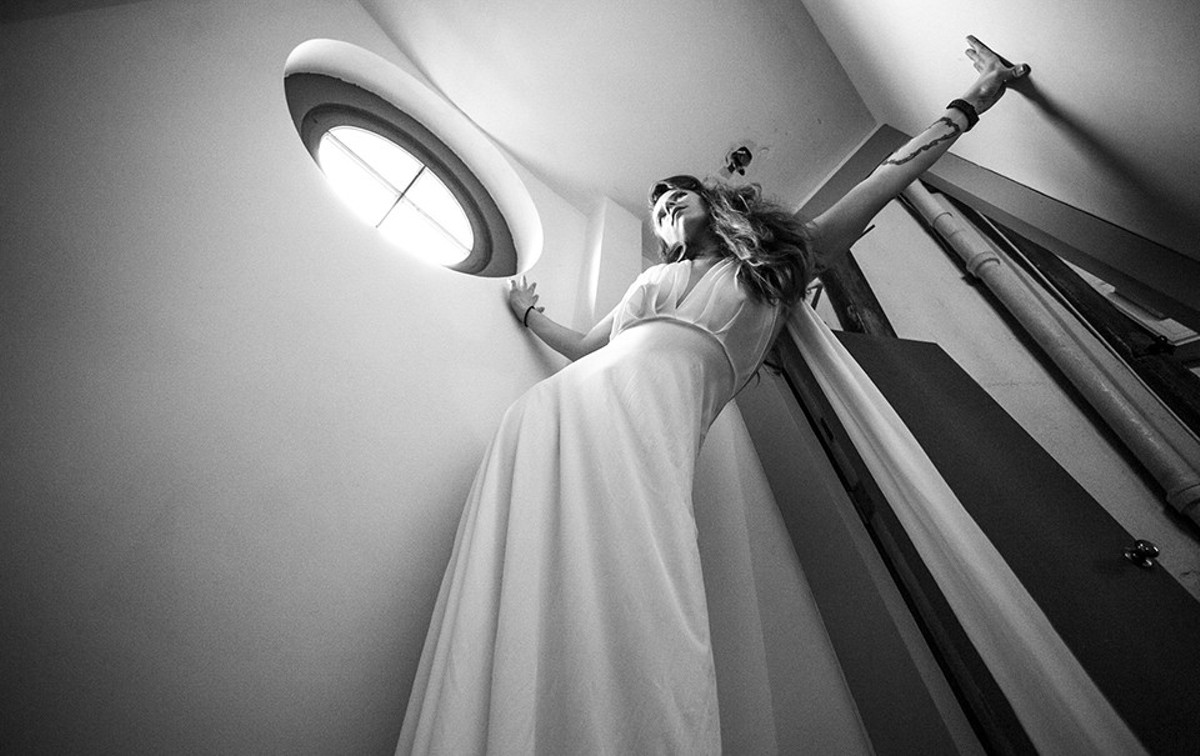 Most St. Louisans know this anecdotally, but Courtesy Diner on Kingshighway at Arsenal really is open 24 hours. And for a certain type of night owl, it's no small comfort to know that a BLT or slinger can be your salvation as midnight turns to 1 a.m. and beyond. Most of us have never darkened its doorway without a few questionable decisions having led to this greasy-spoon Valhalla.

So it's only slightly disorienting to enter Courtesy at 5 p.m., with the late-afternoon sun still shining as the diner's few patrons and stalwart staff populate either side of the counter. In the last booth sits Ellen Hilton Cook with a coffee and a notebook; her choice of venue for an interview is appropriately off-center for a musician known for her flights of fancy. But for a former wild child who has embraced sobriety, Courtesy is a fitting locale. A diner is no longer a place to stave off the next morning's regrets; it's simply a place to get a cup of coffee.

Cook has spent much of the past decade playing piano and singing her campy, dramatic and witty songs. Sometimes she performed solo, or with a drummer, or as part of a rock-centric quartet. Sometimes, she recalls, she would get too drunk to perform or would get into set-ending fights with her bandmates on stage. But she almost always went by the name Ellen the Felon, a high school nickname that gave her an edge and an identity as she navigated the local rock scene as a twenty-something.

But at 33, Ellen Hilton Cook is looking forward to a modest reinvention of her image — leaving the "Felon" part of her name behind — and a reinvestment in her art. She'll perform at the Halo Bar on May 30, immediately following Amanda Palmer's set at the Pageant, and a recent embrace of electronic textures, loops and beat-making has given her piano playing a new palette to work against.

The Halo Bar show will also serve as her highest-profile gig since a recent health scare left her hospitalized. "I've had a lot of health issues the past few years; some of it is genetic and some of it was my lifestyle," Cook says. "I quit drinking last year and in January, my doctor told me that I had Type 2 diabetes; turned out she misdiagnosed me and it was Type 1."

In addition to that diagnosis, Cook had developed ketoacidosis, a condition that left her tired, dizzy and thirsty, all the time — basically, she said, she felt perennially hungover despite her sobriety. She cops to some poetic justice, since she credits her drinking for having brought on many of her health issues.

"Things got really bad; basically all of my organs were shutting down," she says. "Everything in my body was just collapsing. I'm a delicate flower, I guess. I just can't drink sixteen hours a day!"

A lifelong service-industry vet, Cook she says she's still fine going to and playing at bars these days. On a recent Sunday afternoon, in fact, she was behind the spinet at the Tick Tock Tavern, playing a set of mostly cover songs. While it wasn't quite billed as a fundraiser, Cook did the show as a small token of thanks for those who contributed to an online campaign to help defray her medical bills.

"A lot of people supported me; I don't even know why," she muses. "It was a lot of support, so I'm planning on giving back, for sure, in a few different ways."

The set at Tick Tock, while a one-off, gave a view of Cook's skills as an interpreter of songs — she played cuts by Crowded House, XTC and Blondie that afternoon — but she continues to write her own material. Some of it still comes from a place of "emotion and trauma," she said. Some of her earliest material as Ellen the Felon was written after a 2010 hit-and-run accident that left her injured and caused the death of her boyfriend, beloved local musician Dave Hagerty. For many local listeners, that part of her story has become grafted to her music as well.

"Do I, as a songwriter, want to perpetuate my feelings or use my music as a crutch? As someone who has an addictive personality, am I just avoiding the truth by putting them into songs rather than dealing with things?" Cook leaves that as an open question, but notes that her newer material is less informed by personal history. "I just want the option of knowing that I can write a song just as a professional musician."

Cook's upcoming show at the Halo Bar will be a recall of a similar show in 2010, not long after her accident, where Cook played after a Dresden Dolls set at the Pageant and Amanda Palmer joined her onstage for a song. Asked to reflect on her journey over the almost-decade between those shows, Cook looks back on her younger self — Ellen the Felon of yore — with a mix of love, concern and respect.

"I mostly just want to forgive younger me for being so full of guilt," she says. "I'm a different person; I've been through a lot in the past ten years. And I don't want my trauma and my quitting drinking and my recklessness to define me. I just want to be Ellen."