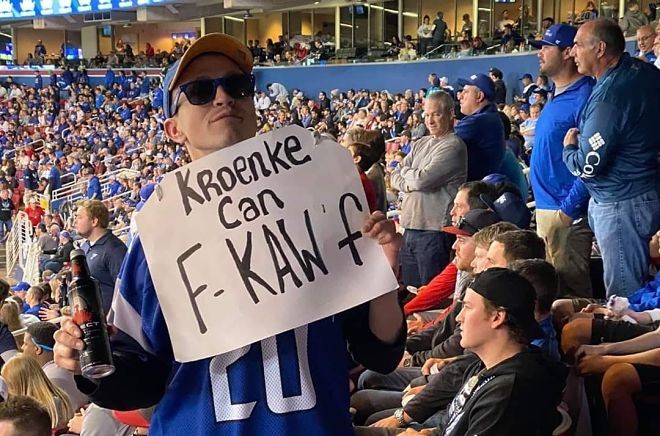 JUSTIN POOLE
A sentiment expressed by many at Sunday's BattleHawks home opener.

After some 1,530 long, excruciating days, St. Louis football fans were finally able see their sport of choice at the Dome again, no thanks to the NFL or a certain toupee-sporting team owner who shall remain nameless.

Yes, February 23, 2020 will forever be remembered as the day Ka-Kaw Nation was truly born, thanks to St. Louis' new XFL franchise, the mighty BattleHawks. As early as 8 a.m. beer-thirsty Hawkamaniacs were setting up grills and rolling out coolers; by 9:30 a.m. the parking lots and even the top levels of some of the parking garages located around the dome were filling up with rowdy tailgaters.

JUSTIN POOLE
We can put that whole "helicopter or bird" question to rest now.
The festivities kicked off with a parade of early bird fanatics and marching bands that made their way to the site of the official pregame party area at Baer plaza, where the BattleHawks themselves made their entrance, most sporting the jerseys of your Stanley Cup Champion Blues, as fire cannons, explosions, camera flashes and thousands of squawking St. Louisans welcomed the players into the dome for their first home game.

The party outside, however, was still just getting started. There seem to be little to no rules at an XFL tailgate. Day drinking in public is not only accepted but encouraged, and often facilitated by total strangers who become part of your flock. The common look for an XFL fan is a drink in both hands and a smile on their face.

The streets, then, were filled with open containers and joy. While there was beer and food available for purchase at the official pregame party, the areas around were free game for bringing your own brews and foods. Most fans seemed to choose this route.


Host DJ Big Poppa G kept the crowd hyped up with giveaways, a lot of Nelly songs, costume contests, dance offs and musical guests, including the School of Rock kids shredding Iron Maiden covers. By the time the doors opened the thousands waiting in line to get in had worked themselves into a frenzy — one fueled by the love of football and the unbridled hatred of Stan Kroenke.


BattleHawks fans let everyone know how they feel about Stan Kroenke.

From every corner of every lot, and every line for every porta-potty, the chants rang out. "Kroenke sucks" is as much a battle-cry for the team as the ubiquitous "ka-kaws" that filled the Dome. BattleHawks nation is dead set on making sure the world hears what we locals already know: St. Louis is and always has been a football town. We’re just no longer an NFL town.

This is XFL country, and after yesterday, no one is missing the Rams. 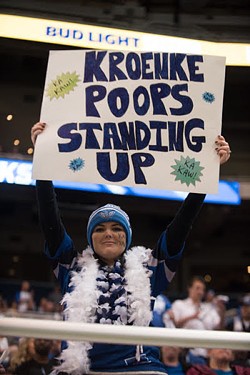 TRENTON ALMGREN-DAVIS
It's true, you know.
From the national anthem to the final seconds the crowd was electric and the players seemed to feed off the energy of the XFL’s biggest live audience to date — more than 29,000 fans, according to reports. It took only four plays and less than three minutes before the BattleHawks had their first points on their home field, and they never looked back.

The second quarter featured more history when the BattleHawks payed tribute to the greatest show on turf with some old school trickery that led to the first kickoff return for a touchdown in XFL history. Later kicker Taylor Russolino made his case for an NFL tryout with a 58 yard field goal, another XFL record.

All told, St. Louis' new home team glided to a 29-9 victory over the New York Guardians, improving to 2-1 on the season, good enough for first place in their conference.


Football is back. St. Louis is one of the greatest sports cities in the entire world and the fans prove it event after event, year after year. Stan Kroenke lied. The NFL decided we weren’t good enough and moved on.

It's time for us to do the same.