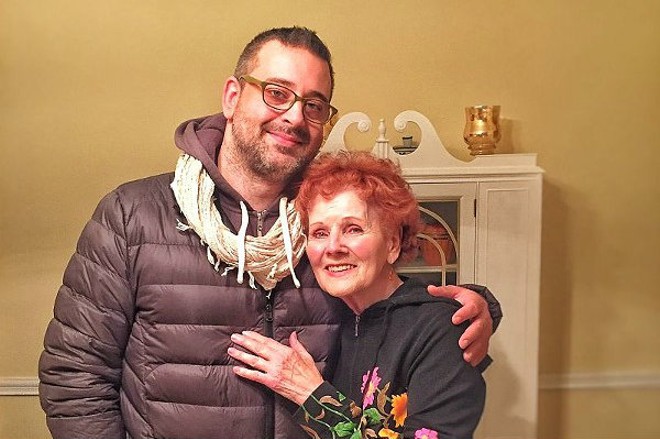 Photo courtesy of the artist
When we asked Eric Hall for a photo to accompany this story, he sent us this one of him with his grandma, whom he described as "a perfect person."

Process and place has always been more important than product for experimental musician and composer Eric Hall. For his most audacious projects, he's often an Oz-like entity, staying out of the way while other musicians work around the loose set of rules he's conjured up for them. For example, in 2012, his Site/Sound project paired local artists with installations at Laumeier Sculpture Park, and patrons summoned the tracks on smartphones or iPods for a site-specific soundtrack.

Hall, who is 41, has been a ready collaborator with local artists for years, but in 2016 he had the opportunity to work with the avant-garde collective Alarm Will Sound, an outfit with bonafides inside and outside of the new music sphere. Its members have worked with Aphex Twin, Radiohead and Medeski Martin & Wood, as well as local institutions such as the Opera Theatre of St. Louis. 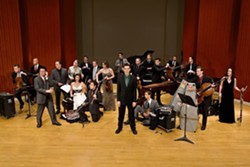 "When they first started coming to St. Louis, my name was one of the first names they came across," recalls Hall. "They approached me, and I got to go hang out with them and develop friendships with many of them." After sharing a bill, collaborating seemed the next logical step.

The result, Diffraction ≉ Refraction, was performed at the Mad Art Gallery in May 2016. A recording of the eighteen-minute piece was recently released on Bandcamp, alongside a demo recording made a month earlier. While the initial performance was designed as an immersive experience for both the listeners and the musicians — Hall set up a circle of speakers to encourage audience members to move around the space, and he tinkered with the instrumentalists' monitor mixes as they performed — this recording gives a compelling rendition of the sonic field that the artists created.

The members of Alarm Will Sound are all conservatory-trained professionals accustomed to interpreting complex scores; Hall's musical ideas don't exactly fit on staff paper. So in crafting a collaborative piece, Hall gave the three musicians — who played trombone, cello and clarinet — loose guidelines rather than note-for-note transcriptions. His goal was to encourage improvisation, something the collective is not normally known for.

"The instructions for the first few moments was to not focus on tonality but focus on the tactile sound of their instrument," says Hall. He says he posed questions like, "How could you emulate a house settling, or walking on a straw mat?" 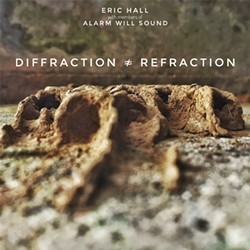 The piece begins with subtle creaks and a flurry of low, rumbling susurrations; some of Hall's electronic manipulations come through in the mix early on, but eventually the native tones of the orchestral instruments reveal themselves. Hall's initial instruction only calls for the players to intone three notes on the scale. But what starts as a kind of sostenuto echolocation between trombonist Michael Clayville and clarinet player Bill Kalinkos begins to subtly drift apart as each engages in more florid runs on their instruments.

If Hall had a trick up his sleeve for the Mad Art performance, it came in the unusual form of a voicemail recording. Hall remembers the process of communicating with Alarm Will Sound as being "baby steps," and the back-and-forth with managing director Gavin Chuck tested Hall's patience.

"I over-reacted and threw a temper-tantrum and wrote a very articulate letter telling them to fuck off," says Hall. "He sent me a voicemail that was much more civil than I deserved." Chuck's voicemail became fodder for the performance, as Hall played and manipulated the recording; its inclusion was a surprise to the instrumentalists, who must have been startled to hear the disembodied, sonically mangled voice of their colleague through the P.A.

While the collaboration is a one-off, Hall made the recording available on Bandcamp in early February as part of the site's benefit for the ACLU. He calls the release, and its fundraising affiliation, "a 'Fuck Trump' kind of effort," but he eschews any political undertones to the construction of the piece. "It would be easy to pretend that there is an easy parallel to current events, but honestly, no," Hall says with a laugh.

The release of Diffraction ≉ Refraction​ serves another purpose for Hall: It's his first release after a medical scare last year and several months of rest and convalescence. He had surgery to remove an egg-sized tumor between his ear and eye, which proved benign. He's sanguine in relating what sounds like a harrowing surgery and grateful for a quick recovery and the help of family and friends — though he did have to part with his truly epic beard for the procedure. But for a guy who plays local gigs a few times a month, the time away from music was a marked change in routine.

"Because of the medical stuff, the last half of last year, I really did very, very little. I was having a hard time feeling like I was super-connected with it. I didn't have any ideas I wanted to keep running with," he says. Hall now has a few shows booked in March — no collaborations, just his ever-changing approach to sound and texture. It will be a welcome return to the stage for one of the city's most restless artists.

"I'm looking forward to getting my wind back," Hall says.