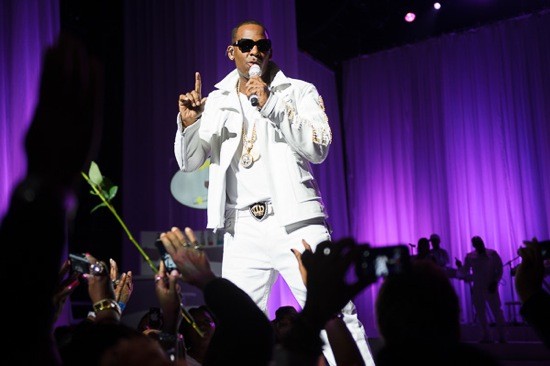 Today, R. Kelly's album Chocolate Factory, featuring the seminal song "Ignition (Remix)," turns 10-years-old. Released on February 18, 2003, the album was an immediate commercial success -- and a decade later adoration for it endures. Chocolate Factory marks a transition in Kelly's career, with more attention given to romance, love and emotions more complex than a little bump and grind. Revisiting songs like "Step in the Name of Love" and "Dream Girl" foreshadow his more tender, sentimental 2010 departure Love Letter.

And then of course there's the album's most, um, seminal track, "Ignition (Remix)," as classic a slow dance jam and baby-making song as exists.

Now usually we don't do this, but RFT Music is making an exception for Chocolate Factory. Let's say "Happy Anniversary" to "Ignition (Remix)" the right way.

See Also: -R Kelly Got His Crotch Grabbed 26 Times and Performed 50 Songs At The Fox Theatre

Though it tells a pretty simple story -- R. is trying to boink a lady in the back of his truck, at a party, in a hotel room, likely elsewhere -- "Ignition (Remix)" is much more than just a darn fine party and dance song. Fragments of its lyrics became quotable turn-of-phrases:

"You must be a football coach/The way you got me playin' da field."

"We're sippin' on coke and rum/I'm like, so what I'm drunk/It's the freakin' weekend baby, I'm about to have me some fun."

"Then after the show it's the after party/And after the party it's the hotel lobby."

And those are just a few of the more memorable lines. Who could forget the "bounce, bounce, bounce, bounce" break, or the slightly confusing yet totally perfect use of rhyme in the chorus: "It's the remix to ignition/Hot and fresh out the kitchen."