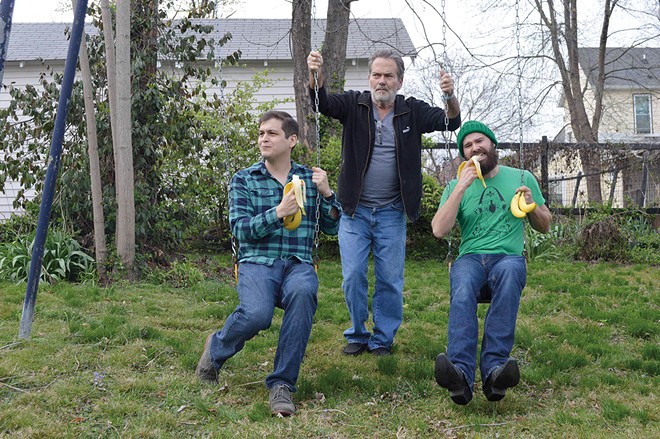 COURTESY DAVE WERNER'S FAMILY
Dave Werner (center, with his band the Chimps), is remembered for his brutal honesty and care for his art, family and friends.

Dave Werner, Maplewood's unofficial poet laureate, died on October 21, 2022, of heart complications. He was 68 years old, and he's grumbling over my shoulder as I write this.

"The RFT? The rag that called [name redacted] the songwriter of the year?" he says to me.

He's been talking a lot to me since he passed away, and I imagine I'm not alone. Those of us who knew him grew accustomed to gruff outbursts about St. Louis musicians, reality TV shows, the U.S. government and just about every other subject imaginable. Since he died, he's only gotten more opinionated.

"You're getting too cute with this," he says over my shoulder. "Just tell it like it is."

As usual, he's got a point.

Dave Werner, born David Thompson, was the son of Jack and Dee Werner.

Dee was a talented musician and prolific songwriter, and she introduced her children to music at an early age. Her gift was clearly passed down.

Dave had 11 siblings, and there was never an abundance of money in the Werner household. Dave frequently told anecdotes about his hard early years, and they sound like something out of a cartoon: As just one example, he once received hand-me-down shoes that had previously belonged to a chimpanzee named Mr. Moke. This infamous "monkey shoes" story inspired the name of the vocal harmony group in which we both performed, the Chimps.

For most of his life, Dave lived and worked in Maplewood, taking odd jobs as a contractor. He found a professional niche as a window installer. He had a daughter, Julia, and was a loving, devoted father.

When among friends, he would talk about Julia at every opportunity, beaming with pride when discussing her creativity, humor and intelligence. It was just about the only time when Dave couldn't think of anything negative to say.

For years, you could find Dave at open-mic nights across the city. He'd be sitting at the bar drinking a Red Bull or a soda and grumbling about whoever was onstage.

If you sat and talked to him, there was a decent chance that he'd offend you within the first five minutes of the conversation — if it lasted that long.

For better and worse, Dave was brutally honest. This gave him a mixed reputation within the St. Louis music community. Ask about Dave, and you'd hear stories:

"He told me I was too fat for my voice."

"He told me none of my songs make sense."

"That guy's an asshole."

Simply put, Dave had no filter. And the people closest to him weren't always spared; even compliments came with some baggage.

"Dee [Werner], Chris [Schraw], Dave and my wife Judy [Stein] and I used to sing together," recounts Eric Stein, who runs the Focal Point in Maplewood. "At the end of something, we usually looked to Dave for judgment. If he said, 'Well, that didn't suck too bad,' we knew we had totally nailed it."

Dave's commitment to honesty wasn't always a bad thing. He loved his friends and family deeply, and he'd find creative ways to show his affection.

One December, Dave left me a voicemail.

"Hey, buddy, I've got an idea. Christmas caroling. Call me back."

Dave's idea: Our friend Jesse Irwin had welcomed his first child that year. Dave, Fred Friction and I would head to Jesse's house dressed as three wise men, bringing gifts to anoint the child — a package of hot dogs (a stand-in for frankincense), Stag beer (gold) and Merb's candy (myrrh).

Dave practiced a genuine commitment to his people and his art. For years, he ran a songwriter night at the Focal Point, where he'd highlight artists that he thought were worth the audience's time. He played in several bands, including the Griner Brothers, formed with the late Dave Hagerty, and the Chimps, our trio with Jesse Irwin. We played semi-annual shows, almost always at the Focal Point.

We played our final show on February 15, 2019, a Valentine's Day-themed showcase. For the performance, we'd promised to provide the audience with chocolate-covered bananas — the only aphrodisiac fit for a monkey.

We suggested slicing the bananas, then putting a toothpick into each slice. Dave wouldn't hear of it.

That's how Dave spent the morning of the show: dipping full bananas into chocolate, then hanging them on a clothesline to dry. The audience wouldn't have cared if we half-assed our gimmick — but Dave cared.

Everything good and bad about Dave Werner is still here with us. He left hours of recordings with songs about love, loss and hardship, sung in a tender baritone that could rise to a high falsetto without sounding strained or forced.

He wrote many songs using only his bass for accompaniment — a fretless four-string, which is most likely sitting in a Maplewood pawn shop at the moment (Dave routinely pawned and un-pawned his instruments when work got slow). When he played guitar, he played it like a bass, strumming out intricate backing lines and hammering on the top strings, which gave his performances a jangling sound that was unusual but entirely pleasant.

His musicianship was remarkable, but his songwriting was better. Lyrics don't always work when separated from music, but Dave wrote words that could stand on their own.

Here's one of my favorite stanzas, which appears at the end of a song called "Hagerty." The song is about his late bandmate, Dave Hagerty, and it perfectly summarizes the unspoken wish that everyone has when they're grieving:

If Hagerty comes while we're playing this song
We'll buy him a whiskey, and he'll play along
And we'll never mention the time he was gone,
And we'll play our guitars 'til the morning

His song "Past It" discusses aging, with Dave's trademark bluntness:

My only child is growed up,
Got herself a job and a man,
It's hard to feel useful, but I do the best that I can

There are hundreds of other verses that deserve attention. Look up some of his stuff from the Chimps or the Griner Brothers Band, and you'll find plenty of examples.

As you listen, you'll hear Dave's honesty, his heartbreak and his depth of creativity. You don't have to dig much; it's all right there on the surface.

Dave Werner was one of St. Louis' greatest songwriters. He'll be missed, but he's not going anywhere right away. Music lets you live on, at least for a while, and Dave put all of himself into his songs.

I lean back to let Dave read the end of this article. He takes out a smudged pair of reading glasses, squints at the screen for a few seconds and turns away.

An informal celebration of Dave Werner's life will be held at the Focal Point at 2720 Sutton Boulevard, Maplewood, on Saturday, November 19 from 1 to 4 p.m. Go to stlchimps.bandcamp.com to hear his voice once more.