Stands for Something: The dB's pop hasn't lost its power 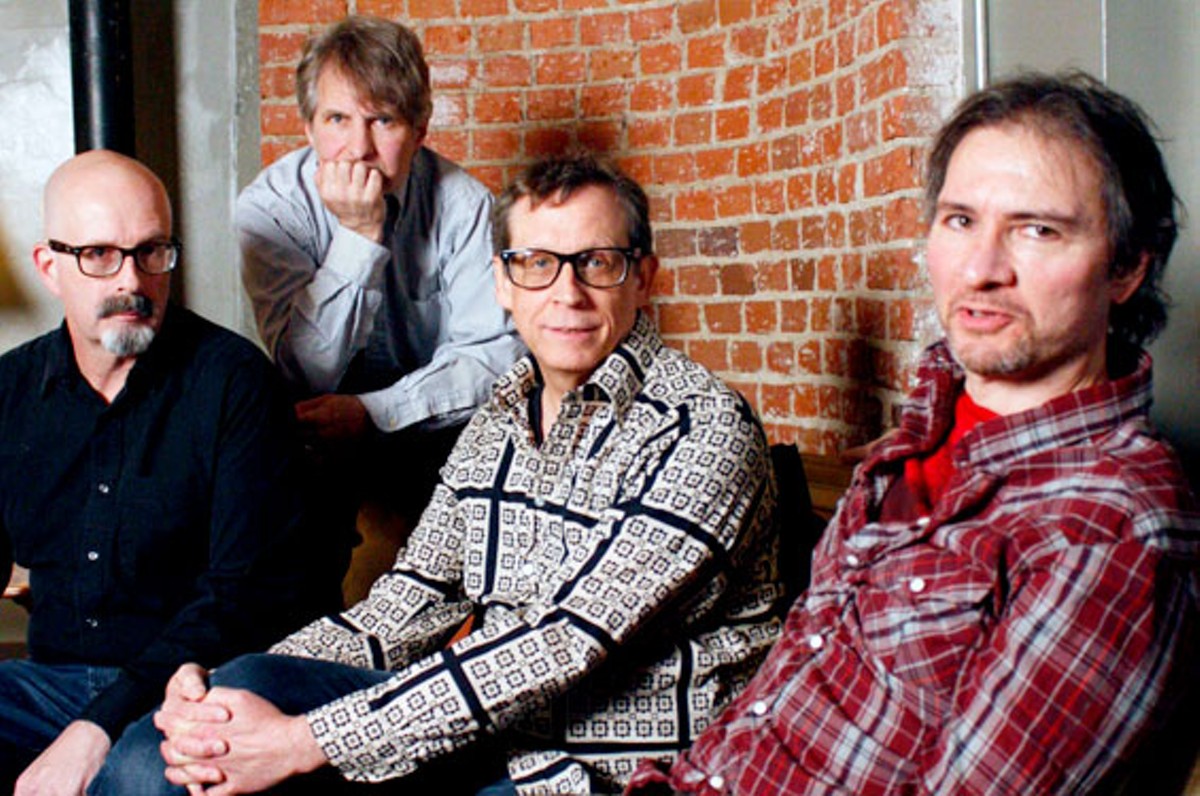 Stands for Something: The dB's pop hasn't lost its power

You can't hurry power pop. It's been 25 years since the dB's last released a proper album. However, with Falling Off the Sky, this North Carolina-bred foursome sounds like it never went away.

Not that this is much of a surprise, as the individual band members never really stopped going. Peter Holsapple and Chris Stamey, childhood friends and principal songwriters, have always maintained their own projects, and they've periodically gotten together to record and perform as a duo. (They played a great in-store at Euclid Records a few years ago, in fact.) Drummer Will Rigby has been a regular member of Steve Earle's band, and bassist Gene Holder has occasionally toured with various groups over the years. The four dB's have been so busy individually, in fact, that Falling Off the Sky took seven years and more than half a dozen studios to realize. Given the long gestation period, it's remarkable how seamless a production it is. As on their first two albums, 1981's Stands for Decibels and 1982's Repercussion, Holsapple contributes the rootsier, more immediate songs while Stamey gets abstract on airy tracks like "Collide-oOo-Scope." Both, however, remain masters of the tricky Big Star-inspired hooks that first brought them to fame.

Holsapple answered some questions about the new album and dB's history from his North Carolina home. Given that he was juggling our interview with putting his two young children to bed, the man could not have possibly been more accommodating or friendly.

Mike Appelstein: So how are you holding up under Hurricane Sandy?

Peter Holsapple: We're getting rain and wind, but it's nowhere near the high tides and heavy tides up north. We're just hoping our friends and relatives up there are all right.

You were in New Orleans at the time of Hurricane Katrina, weren't you?

I lived there. At the time I was on tour. My wife was charged with making sure all was well. Our son was a little guy at the time, and along with my daughter from a previous marriage, we all evacuated New Orleans. That's the basis for that song "She Won't Drive in The Rain Anymore." I basically watched the hurricane take place from the bus; I had to keep working and generating money. But my wife showed incredible strength. She'll forever be my hero.

You and Chris Stamey have performed together off and on throughout the years. At what did you decide to bring the rhythm section into it and make it a full reunion?

After [the 1991 album] Mavericks, we did some work together, and both of us accrued songs over the years. I had done work with the Continental Drifters, which was pretty much like Mamas & the Papas meet the Band. It certainly wasn't what the dB's were, which is a "pop" band, I guess. Over the years we've attempted to deny it, but at a point it's just another nickname. Our favorite rhythm section has always been Will and Gene, and we had songs that we thought would be more appropriate for a "band" record. We grew up with them, speak the same language and have the same cultural reference points. So after we got together, we knew we wanted to record some things. The recordings turned out to be good, so we thought maybe we should make a record. But I was touring a lot, Will was touring with Steve Earle, and Chris still had his thriving studio work, so it was tough to pull everyone together. But we had a few different sessions over about seven years. We really wanted to make sure we had something that would fit the canon.

Was it difficult over a seven-year period to record an album as an album? Or did you find yourself losing the plot?

You can lose perspective or momentum if it takes awhile. Chris did the lion's share of studio work. He, like all of us, had to balance family life with making a living, so he also couldn't spend all the time that would have been necessary. At this point, it's harder to do that than when you're free, single and disengaged. Honestly, for the kind of record we wanted to make, I would not have expected it to have taken seven years, but we're well within the Chinese Democracy parameters. We're all very exact, our own harshest critics, and we have very strong opinions about the way we want to sound. Often they'll match up. But I think we ended up with a very good consensus of what belonged on record. All of us are some percent satisfied.

The fact that you've known each other since childhood and worked together half your lives: Does that mitigate any egos or arguments?

More than anything else, it means we know what to expect from each other. So there's nothing out of complete left field. No one comes in wanting to put, say, a didgeridoo on a track. The "wobble board" concept did come up, if you're familiar with that instrument, but I think it'll have to wait.

Some of the keyboard sounds on Falling Off the Sky reminded me of the earliest Stands for Decibels tracks, like "Espionage" or "Tearjerkin'."

I believe we used the same Ace Tone organ as as in the early days. It's still extant. Chris owns it. It still functions; it's a little touchy these days, but who wouldn't be? We bring it on the road sometimes.

As a musician, you've played with R.E.M. and Hootie & the Blowfish at various times. What was it like playing big spaces with these bands, as opposed to the club settings of the dB's or Continental Drifters?

When you're going out and playing someone else's songs, you have a different kind of emotional investment. As the hired gun, I always do my best to make them sound like themselves. I once had a business card that said, "I Make You Sound More Like You Do." My theory is not to leave your thumbprints all over other people's songs. I was fully aware that those guys wrote the songs, and I was there to help frame the picture. Also, there's a point where you can't see anyone at a big show. You know the coliseum is filled, but you can't see past the first row, so that's different. I mean, I get nervous whenever I play, still get a little trepidation. But no matter what, you feed off the audience, and you have a connectivity to the people onstage. Hopefully, if everyone's firing on all eight, you have this powerful, emotive engine that's out there churning away. I can think of some Continental Drifters shows where the six of us were so focused with each other that it was like being on a locomotive speeding out of control. You had no idea where you'd end up, but you were going there, and you better hang on for dear life.

But that doesn't really answer the question. At a club show with the dB's, it's our stuff, so we're all very involved emotionally and personally. There's a lot of putting oneself on the line for those songs, so I'm particularly careful with mine to make sure they're delivered. The nice thing about the smaller venues is most of the time everyone's there to see you. Five will get you ten that everyone that shows up to Blueberry Hill will know who we are and own actual records by us. So we're not necessarily just on someone's Spotify playlist; we exist on a physical plane. When we played the Bowery Ballroom in New York, there were plenty of twentysomething people there for exactly the first time. And that's very exciting. When you start doing this, you don't think, "I'm going to write classics." So if it strikes a chord, that's important; that's how it's supposed to work. But you can't guarantee that. And I think that the dB's, because of the care that went into those records, have accomplished that in many ways. I mean, our live performances back in the day were certainly hit-or-miss; I'm a lot better at it now. But in a day and age when there's basically an entitled audience, who has access to the whole history of music for free, you'd better have something good.

Anything else to add?

Well, we're very fortunate to have made this good record, and I hope people will hear it. You know, I guess at this point, to make a living at it you either tour your brains out or get a song in a movie. Our personal schedules are such that it's hard to tour our brains out, especially at our relatively advanced ages. I don't know what the future holds for us. I've certainly enjoyed this go-around a lot. I just want to wake up tomorrow. That's triumph. I have discovered that middle age, basically, means waking up and finding friends on the obituary page or sick with cancer. And that's so disheartening. I want to just keep on the sunny side, as the Carter Family would say...wake up in the morning and make it to the end of the day. I'm happy with the little times now. I don't need the huge conquests or a dump truck full of cocaine at my doorstep. If I died tomorrow, I would feel that professionally I had accomplished most of what I wanted to do.

So people should take advantage of this rare opportunity?

I would see us if I were living in St. Louis! I don't think they're going to be disappointed. The setlists we've been doing have been a good balance of old and new. 