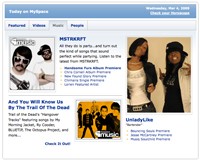 A few weeks ago, we told you about Unladylike, the local duo signed to Island/Def Jam.

They duo's new single and video, "Bartender," is getting promoted online, and it was added to MySpace February 27. It's now a featured video on the site.


The video is filmed, partially at least, at Club Casino in East St. Louis.

Throughout the video, the ladies run up a bar tab. Fuck that recession -- by the video's end, they rack up $6,000 in drinks! At the end of the night, they look bummed when they look at the tab -- for good reason: Because they can't pay it off, the pair gets stuck doing dishes at a club. The bartender hands them aprons and they get back to the kitchen -- thus continuing the lighthearted theme that other St. Louis rappers have put forward in their own videos.