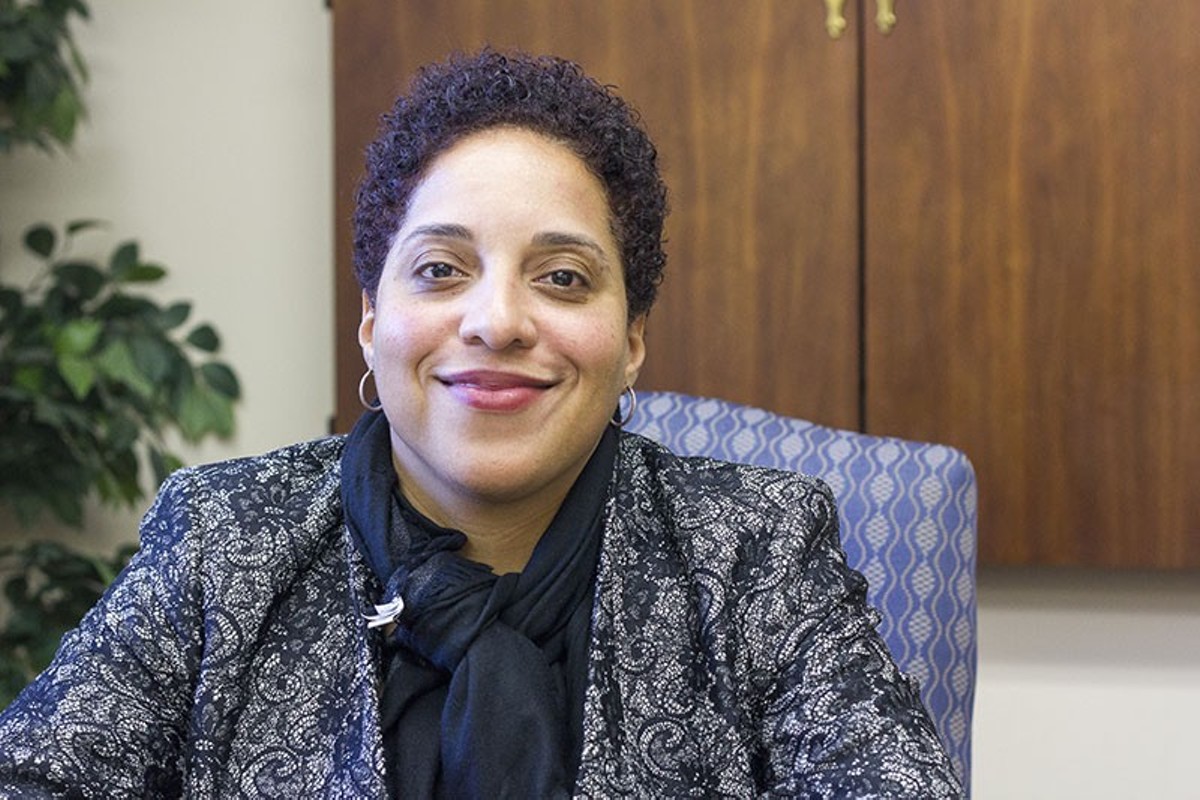 On a Friday morning in June, seven months before being sworn in as St. Louis' first black circuit attorney, Kim Gardner sat in a campaign office on Delmar Boulevard and talked about a funeral.

"He was 27 years old, an up-and-coming artist. He was shot and killed in my district," she said.

Funerals are a part of Gardner's life. Her family has owned and operated a funeral home in north St. Louis for decades, and Gardner worked there as a director before taking a job in the circuit attorney's office. She left the office in 2010, after five years as a prosecutor. She returned to public service only two years later, landing in the state capitol as a representative for the 77nd district, an area that includes several of St. Louis' most violence-stricken north-city neighborhoods.

"That's really the reason that I'm running for circuit attorney," Gardner continued. "I see the destruction of violent crime every day. We come together for more funerals more than we do to celebrate graduations. We have to do better. And the community wants to do better. That's why we have to give the community hope, and that's what I plan to do."

For Gardner, that isn't quote-unquote getting tough on crime, as politicians have promised to do in St. Louis for decades. As she explained during one debate, she's lived "a black life." She knows first-hand that black lives are not just disproportionally shortened by violence, but too often lost to prison.

"When we talk about criminal justice issues, most of the prison population looks like me," Gardner told the debate crowd. "So black lives matters, but you all matter, your civil liberties matter. Your life matters. And we need to do a better job as prosecutors going forward to address those issues."

Gardner didn't just win her race. She blew her opponents out of the water, taking 47 percent of the vote in the crowded Democratic primary. She had no challenger in the November general election.

Gardner's ascension to the top prosecutor job in the city conferred a message: St. Louis is ready for change. As circuit attorney, Gardner is one of the two most powerful elected officials in St. Louis, along with the mayor. She directs 60 prosecutors who handle thousands of criminal cases each year, from the lowest misdemeanors to the most complex homicides. Crime victims rely on her office for justice. But as Gardner sees it, so too do defendants.

That's a perspective shared by many black attorneys who've toiled within the city's criminal justice system, whether they've worked as prosecutors or sat on the other side of the table as defense attorneys.

With Gardner now in office, these lawyers say they see a unique opportunity to change policies in the Circuit Attorney's Office that they found troubling — and to ensure that the people prosecuting cases look like the community they represent. 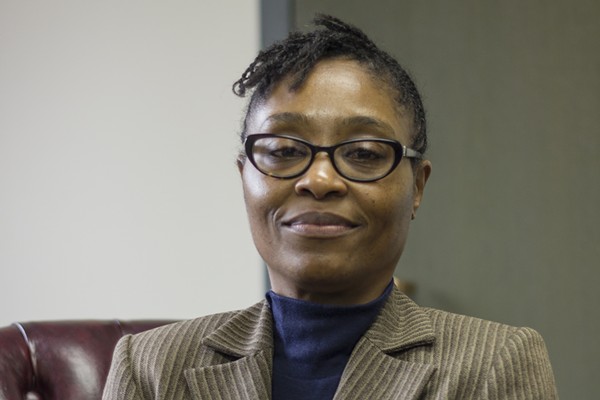 PHOTO BY DANNY WICENTOWSKI
Chief Trial Assistant Annette Llewellyn says that the "us versus them" mentality between prosecutors and defense attorneys has softened since Gardner's election.

The Bible verse is stamped in gleaming letters on a plaque outside the fourth-floor Circuit Attorney's Office, which is located inside the towering gray fortress of the Circuit Court building in downtown St. Louis. To the right of the plaque, inside seven black frames hanging on wall tiles that look like cut marble, are the names of those who've worked as line prosecutors within the office. The dates on the list go back to the 1970s.

Some of the names on the list founded law firms or became renowned judges. Gardner's name is there too, in tidy white lettering on the bottom of the fifth panel from the left, marked 2005-2010.

Annette Llewellyn's name isn't on the list yet, but that's because her prosecutorial career has only just started.

Llewellyn spent much of the last seventeen years as a public defender in St. Louis, representing suspected criminals in cases that directly pitted her against the circuit attorney's prosecutors. In January, however, the Bronx-born lawyer joined Gardner's circle of top administrative staff. Llewellyn now oversees the office's stable of felony trial attorneys.

She brings with her a long memory of frustration with the office.

"What I had seen from this office was a sense of 'us against them,'" Llewellyn says in an interview in her new office in February. "That was just the culture that seemed to develop over those sixteen years or so when Jennifer Joyce was circuit attorney. It was prosecutors versus defense."

Prosecutors and defense attorneys are supposed to act as adversaries, as Llewellyn concedes. But what she perceived over the years went beyond the norms of arguing over evidence or cross-examining witnesses.

The problem was with negotiation. Simply put, Joyce didn't do it. Defendants and their lawyers were kept in the dark about the possible sentences and pressured to plead guilty as a matter of course. Prosecutors were instructed to play hardball, demanding defendants take a guilty plea without preconditions or an agreement beforehand. Defendants were routinely prevented from knowing the state's initial recommendations for sentencing.

That firm stance gave the prosecutor's office incredible power — but Llewellyn says it didn't always serve the facts of the case.

"There was never room to work the case out before you got to trial," explains Llewellyn. "In terms of resolving cases, recommendations are basically how you start the negotiating process. But Jennifer Joyce decided to stop making recommendations, and so things would take longer, because the defendant was not going to do anything until forced. So you'd have to go to court."

Under Gardner, Llewellyn says the office has re-opened the door to negotiations with defense attorneys.

"We can move cases a lot more efficiently that way," she says. Plea agreements are back on the table, and sentence recommendations are no longer concealed as a top-secret bargaining tool.

It may seem like a small change, but it represents a fundamental shift from Joyce's long-established style of management.

Some criminal defense attorneys say they'd like to see Gardner go even further. For instance, Clayton-based lawyer Brandi Miller suggests that the office reconsider how it processes bond-reduction requests.

"Three days makes a difference between having a job and not having a job," vents Miller. "I would have guys that are locked up on ridiculous bonds, and they've lost jobs, apartments, everything — just to get probation at the end. It doesn't make any sense."

In fact, Miller recalls facing Gardner in court about ten years ago, when Gardner was still an assistant circuit attorney under Joyce. The case, says Miller, ended with her client landing on probation. He still lost his job because the Circuit Attorney's Office successfully fought Miller's request to lower his $30,000 bond.

"I had several cases with Kim, and it would be kind of funny," says Miller, "because she and I would talk about a case and try to resolve it, but she didn't have the authority. So she'd have to go to her bosses. Typically whatever we came up with would be turned down."

It was that lack of autonomy — the need to run even small decisions about a case up to the office's executive staff or Joyce herself — that foreshadowed Gardner's departure in 2010, she confirms.

Llewellyn believes that Gardner wasn't the only line prosecutor stymied by their limited influence on the course of a case. The lack of freedom may have chafed especially hard for black prosecutors, Llewellyn believes, many of whom were stuck handling lower-level cases, where there was even less flexibility.

"It was something that was same for the black attorneys back then, they weren't getting moved up into the more victim-intensive units," she says. "I don't think [Gardner] got that chance. And I knew other attorneys in this office who did not get that chance."

It wasn't just a case of title envy: Being promoted to higher-level units meant handling serious crimes, such as homicide and rape, and along with the added complexity, those cases conferred responsibility and indicated a level of trust. Over the years, Llewellyn claims, Joyce's trust seemed particularly limited when it came to black prosecutors.

"I only remember two team leaders who were actually black or any other minority class," Llewellyn says. "And obviously none of the executive staff I've ever seen since I've been working in this city have been of any minority class at all."

The Circuit Attorney's Office has historically struggled to retain black prosecutors, and only in rare stretches over the last three decades has the office boasted more than ten black attorneys on a staff that usually hovers around 60.

In Joyce's defense, competition for top black lawyers is fierce, and the circuit attorney's office cannot come close to matching private-sector salaries. Under Joyce, the office achieved far greater diversity than the average law firm in St. Louis — a city, it should be noted, that counts about 50 percent of its population as black. According to an annual study by the National Association for Law Placement, only five percent of attorneys employed by St. Louis firms are black. Nationally, that number barely breaks four percent. Even with Gardner's recent hires, the current office boasts just ten black prosecutors.

But some black lawyers, including Llewellyn, say they were interested in the prosecutor's office in past years — only to find the office wasn't interested in them. In 1997, soon after she moved to St. Louis, Llewellyn says she mailed an application to the Circuit Attorney's Office, which at the time was being run by Dee Joyce Hayes. She says she never heard back. Llewellyn joined the public defender's office instead, where she was able to observe the Circuit Attorney's Office change hands with Jennifer Joyce's election in 2000. All the while, Llewellyn noticed a steady cycle of black prosecutors in and out of the office.

Now that she's inside the office, Llewellyn says she's been "pleasantly surprised" by the willingness of the prosecutors who worked under Joyce to sign on for Gardner's new prosecutorial philosophy.

"Not all the attorneys have this mentality of us-against-them," she says. "Honestly, I haven't had to change a lot of minds since I've been in here."

And that's remarkable in light of the fact that Llewellyn sees her job as nothing less than a total shift in thinking. She notes that before Gardner's election, defense attorneys and prosecutors were always separated — even during the weekly docket calls where new cases are picked over by prosecutors and public defenders. Under Joyce, the two sides sat at different tables, positioning themselves as rivals as they weighed new cases. Now, prosecutor, defense attorney and judge sit at the same table in the docket office.

It's symbolic — but for the longtime public defender-turned-prosecutor, it's a good start.