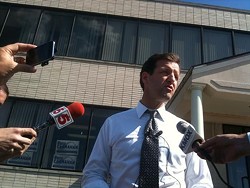 Congressman Russ Carnahan held a press conference today to address allegations that the suspect of last week's firebombing of his campaign headquarters worked for his re-election campaign.

Carnahan did not say the man's name but did confirm that the name Chris Powers made public this morning on a right-wing blog once worked for his campaign. According to Carnahan, Powers volunteered for his campaign in July and was hired this month as a political canvasser -- a job he kept for five days before being let go for "failing to do his job."

This afternoon Daily RFT left a message with a Chris Powers listed in the St. Louis phone book but has heard no response.

Outside his campaign office this afternoon, Carnahan told reporters that he hopes whoever threw a molotov cocktail through the rear window of his campaign headquarters last week will be prosecuted to the full extent of the law.

"Law authorities have done thorough interviews," said Carnahan, who added that he's been reticent to talk about the issue out of concern of "hindering" the police investigation. "The fact is that no one has yet been charged with a crime."

The blog Gateway Pundit today reported that Powers was upset that he hadn't been paid for his campaign work. Carnahan, however, denied that claim.

Asked whether he's concerned as to what kind of damage Powers' alleged link to the firebombing might have on his campaign, Carnahan responded: "I'm not worried about that. My No. 1 concern is that the people working for me are safe."