"Cat in Space": Meet The Two Amazingly Awkward Brothers Who Created the Meme 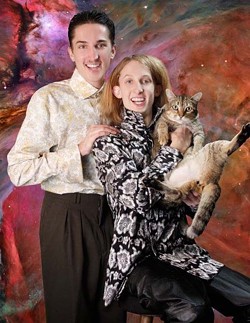 What is it about this photo that makes it so likable? Is it the space background? The outfits? The little mustache? The spread-eagle cat butt?

Whatever it is, "Cat in Space" went viral after Nick Schleicher posted it online in 2010. After three years of being passed around the Internet, Nick, his younger brother Jake (he of the blond hair and leather pants) and Murray the cat have been featured in a book, a calendar, on television and in numerous "Most Awkward" lists.

"Our mom was begging us a for a picture for two or three years. I didn't want to do one," Nick tells Daily RFT. "Eventually I was like, 'If you get one, it's going to the be the way I want it to be.'"

Daily RFT stopped by the Schleicher house in Mehlville earlier this week. Nick, 25, and his younger brother Jake, 21, don't look as they do in their famous picture. They are goofballs, though.

In preparation for the interview and photo shoot, Jake made sure to dress up in his Monday best: No shirt, floor-length bathrobe, gold chain and rings. As for Nick...he does this thing with his eyes:

Danny Wicentowski
This is the thing.

Their mother, Cynthia, says her sons have always been this way. When the two were small, they cut up their her Victoria Secret catalog and taped the pieces in fun places around the house, like under the toilet seat, in the freezer, inside the mailbox and picture frames.

Nick Schleicher/Stephanie Kitts
This never-before-seen evidence proves "Cat in Space" was not, in fact, photographed in space.

So when she asked for a nice Christmas photo from her sons in 2010, it's not surprising the brothers created something ridiculous instead.

"We just staged the picture and had a lot of fun with it," recalls Nick, who was attending the School of the Art Institute of Chicago at the time. Jake had just finished high school.

The outfits came from a stockpile of dollar-store clothes they'd amassed after years of receiving them as gifts from relatives. Jake's shirt came from the Jimi Hendrix exhibit at the EMP Museum in Seattle. He says he never wore it again.

"Those leather jeans didn't fit me," Jake adds. "I couldn't pull them up."

Yes, the photo was staged, so it's is not "authentically" awkward. Then again, it was just supposed to make their mom laugh.

"I never intended for it to be like this. I just intended to give it to her for Christmas," Nick says.

But after he saw a friend's family photo posted on the Awkward Family Photo website, Nick decided it was time to upload his own special portrait.

The photo, dubbed "Cat in Space," made it into the hall of fame section of the site in a matter of weeks. After the three years, it has been manipulated, warped, face-switched, Nicolas Caged and who knows what else.

This is Nick's favorite version.

Continue for more awkward photos, as well as video of Nick and Jake weirding out Tim Ezell.