Chris Duncan Still Being Conspired Against

Send a News Tip
Sadly, it looks as if Boston - or, more accurately, Pawtucket - just wasn't far enough for Chris Duncan to escape the shadowy conspiracy against him. 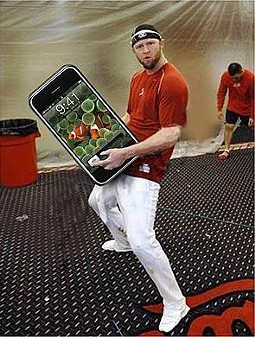 Keep on humping, Chris, and keep reaching for that rainbow.
Duncan has been released by the Boston Red Sox, less than a month after he was acquired in exchange for Julio Lugo. In 85 at-bats for Boston's Triple A affiliate Pawtucket, Duncan hit .188/.255/.294, good for an OPS of .549.
I feel bad for Chris. I really do. He was always basically a one and a half, maybe two-tool player, and what tools he did have seem to have evaporated. His power is gone, his plate discipline is shot, and what you're left with is a player without a position who doesn't hit well enough to make his awful defense palatable.
On the other hand, I can't help but think of the laughable display we saw from both Tony La Russa and Dave Duncan when Chris was dealt. Just before that, La Russa came out and publicly said the fans made him want to vomit with their treatment of the embattled slugger, proof positive it's generally a bad idea to allow personal entanglements to become part of the job. Even worse, though, was Dave Duncan's bizarre diatribe after Chris was moved, in which he claimed certain members of the organization were conspiring against his son. Someone wanted to get rid of his son, he said, and that someone has succeeded. He then took a shot at the minor league system, implying the Cards had no one in the minors worth trading for a recently DFA'd player.
So what now, I wonder? Is there some vast anti-Duncan conspiracy in Boston as well? Do John Mozeliak and Jeff Luhnow and the rest of their Illuminati brethren have enough pull with the Sawx that they simply put in a call and had Duncan released? Or is it maybe, just maybe, possible Chris Duncan simply isn't that useful a ballplayer anymore?
When Duncan had experimental off-season surgery to repair a disc in his neck, there were plenty in both the print and online media who didn't believe Chris should have come back in 2009. No one had ever come back from the sort of surgery he had and played professional baseball. There was no way he was going to be able to be the Chris Duncan of old this season, and no guarantee he ever would be again. He should start '09 in the minors, these people said, and try to get himself in playing condition there without the pressure and the spotlight and the shadow of his father. Looking back, those all sound like excellent suggestions to me.
Instead, Chris came north with the big club, and the rest is history.
I hope Duncan can get himself healthy and back to where he once was. When he came up back in '06, the only player I more wanted to see at the plate with the game on the line was Albert himself. But 2006 was three years ago, and things change. And in the end, all this nasty, slow end to a great story showed us was the ugliest side of both fans and coaches.
So good luck, Chris. I hope you can find that stroke again. But do me a favor, and find it somewhere else, okay?
In the meantime, I'm just going to keep praying every day not to see "Cardinals Sign OF Chris Duncan to Minor League Deal" on the news feed.