In the end, it might not be the slew of slurred bigotry or the end-of-episode rap song called "N**ga Nation" that gets Bob Romanik kicked off the airwaves — but rather the end one FCC's judge's patience.

In an order signed today, Jane Halprin, the administrative law judge overseeing the license renewal for the stations held by Entertainment Media Trust, or EMT, did exactly what she threatened to do last month: She terminated the hearings, and, it appears, put the "Grim Reaper of Radio" on notice for a possible end to his long-running, long-reviled show.

As the Riverfront Times reported last month, Romanik — known primarily for a free speech philosophy one could summarize as "I want to say the n-word and nobody can stop me" — has come under scrutiny by the FCC following an investigation into his alleged control of the station's operations. 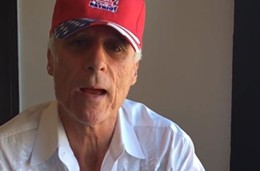 VIA BELLEVILLE NEWS-DEMOCRAT/YOUTUBE
Bob Romanik.
On paper, EMT and its trustee Metro East attorney Dennis J. Watkins control the stations that host Romanik's show. However, as the FCC dug deeper, it found "substantial and material questions of fact" that it was actually Romanik pulling the strings.

A convicted felon who served federal prison time for fraud, the shock jock put up the money to buy the stations, but he would have had a tough time getting a license to operate them under his name. So he didn't. The FCC investigation found evidence that he instead set up EMT as the front for his business interests.

As regulators challenged the trust's application to renew its licenses, EMT filed for bankruptcy, delaying the process, only to undeclare bankruptcy just months later. Then came more hearings in Washington D.C. — at which Watkins failed to appear. Halprin, the FCC judge, issued an order warning that "EMT’s continuous efforts at obfuscation" could get the entire license removal process terminated. The judge set a February 10 deadline for Watkins to answer the court's questions. Apparently, the deadline came and went without resolution.

In Halprin's ruling, the judge wrote that "dismissal with prejudice is warranted" — indicating that the decision is final.


"The Presiding Judge stood ready to receive EMT’s evidence and consider arguments in favor of granting its applications, and afforded EMT several procedural concessions to facilitate discovery. EMT chose not to take advantage of those opportunities, however, and instead has increasingly detached from this proceeding, culminating in its failure to submit any response to the January 24 Order. The Presiding Judge therefore declines to expend further government time and resources on this matter."

According to online FCC records, Watkins had sought to renew the licenses in 2012, the same year that then-St. Clair County Board Chairman Mark Kern filed a complaint opposing the license renewal on the grounds that EMT was actually a "straw party" for Romanik.


The order didn't stop Romanik from doing his show today, and it's not clear what happens next. In the past month, between his vaunted oration about the difference between "proud blacks" and "slimy, greasy n*****s," the shock jock has dropped hints that his show may not be long for KQQZ (1190 AM), one of the stations whose licenses were up for renewal — a process now terminated at the hand of the FCC.

"They're trying to take the stations away, and if they take them they won't be back," Romanik said between callers during a January episode. "They would be off the air forever."