State Representative Ian Mackey emasculated a bigot on the floor of the Missouri House of Representatives on April 14. It was a glorious thing.

Mackey, D-St. Louis County, unloaded a brilliant, unscripted speech for the ages on Representative Chuck Basye, R-Rocheport, in response to Basye's bigotry targeting trans kids. Mackey's remarks were so heartfelt, eloquent and devastating that they went viral for millions to applaud.

Mackey deservedly enjoyed a national media victory lap, one that is still resonating. Basye is blessedly term limited and will soon be slinking back to his Rocheport home with tail tucked firmly between his manly legs. At least for now.

Basye affixed an amendment to an unrelated elections bill that said, in part, that "no public schools shall knowingly allow a student of the male sex, who is enrolled in such public school, to participate in the school-sponsored athletic team that's exclusively for the student of the female sex."

The amendment was dedicated to the proposition that, in Basye's words, "it is proven that males are biologically superior to females." That speaks for itself. 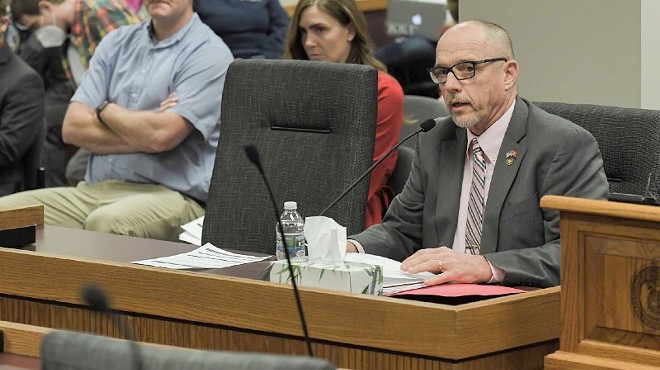 Mackey is not a trans person, but as a gay man, he rightly portrayed the hateful rhetoric as an attack on the LGBTQ community writ large. Basye is presumably heterosexual, assuming the phrase "better latent than never" does not apply to him.

The speech by Mackey may best be remembered for the line "Gentlemen, I'm not afraid of you anymore." It culminated in a withering attack on the likes of Basye for their cruelty to gay people like Mackey throughout his childhood in rural Missouri. And for the transphobic legislation that punctuated it.

"I was afraid of people like you growing up ... I grew up in a school district that would vote tomorrow to put this in place. And for 18 years, I walked around with nice people like you who took me to ball games, who told me how smart I was. And then [they] went to the ballot box and voted for crap like this. And I couldn't wait to get out, to move to a part of our state that would reject this stuff. Thank God I made it out ... [but] I think every day of the kids who are still there, who haven't made it out, who haven't escaped from this kind of bigotry."

Those were powerful words and mostly left Basye stammering. Especially when Mackey referenced Basye's late gay brother. Basye has previously been public with regard to his brother's difficulty in coming out to the family.

"Can I tell you if I were your brother, I would have been afraid to tell you too?"

That left Basye muttering inaudibly at first. Then, as People Magazine noted: "Basye acknowledged that his brother initially 'thought that we would hold that against him and not let my children be around him.'"

"It never would have happened," Basye said. "I'll tell you that. My kids at that point in their life adored my brother." That sounds humanizing enough and it might have even been quasi-believable were it not for what Basye did in response to his public humiliation. Rather than move on quietly, or even show a molecule of humility, Basye decided to go full macho man on Facebook. In a pathetic attempt at cool, Basye posted a picture of himself lounging with a cigar, his paunchiness and a snarky smile below the words, "This is me worrying about all the snowflakes that think Ian Mackey is relevant!"

Two days earlier, Basye had termed Mackey "a loudmouth crybaby" worried about reelection. And he claimed "the radical democrats attacked my character and made many slanderous accusations! I was called a Nazi, misogynist, a supporter of sexual assault and abuse, and I was aligned with North Korea, Russia and Iran!"

To be fair, if all those accusations actually were made about Basye, they were only partly provable. But the truly revealing part of Basye's post was the kill shot:

"It didn't phase me at all, I went home afterwards, enjoyed a delicious glass of Maker's 46 Bourbon then laid down and slept like a baby!!"

Now, that's wonderful. It didn't "phase" you? Basye is the chairman of the House Education Committee. But he doesn't know the difference between "phase" and "faze."

As metaphors go, it doesn't get any better than that. And Maker's ought to sue him.

It's doubtful that the world of politics has seen the last of Basye. Maybe he'll run for state Senate or decide to honor the local school board with the presence of his pulsating masculinity.

Regardless, Basye's tenure as a wingnut heartthrob in the legislature should not be forgotten. His eight years there was testament to the decline of Missouri's legislative process.

Thanks to gerrymandering, elected officials on both sides of the aisle typically represent districts that are safely partisan in their favor at general elections. The only accountability for Republicans and Democrats alike can come in the form of being "primaried" — a term that did not exist as a verb until recent political history.

Basye's effort to persecute trans kids in fealty to national Republican talking points likely will die before reaching Governor Mike Parson's desk. But that doesn't matter a bit: The benefit to having the issue notched on Basye's political belt is the same regardless of whether it becomes law. Ditto for any Republican needing a nice anti-LGBTQ vote if facing a primary opponent.

The only real consequence to Basye is the one he doesn't care about: that most people will forget anything decent he might have done in the past eight years.

The caricature of Basye's career will have two bookends: In his first term, in 2015, he garnered statewide headlines for allegedly saluting Confederate soldiers' graves (he denies it) at a ceremony honoring them at his family's cemetery. In his final term, he's going out in a blaze of transphobia.

A Democratic source tells me Basye actually did more good things legislatively than most Republicans in his tenure on the education committee.

"We worked on so many things together. A lot that helped kids. He has helped my own legislation, and I've helped with his. It's his decision how he wants to be remembered. This [transphobic] stuff changes everything. This is an issue that poisoned the well, poisoned his reputation and poisoned his legacy. If he continues with it, this unfortunately will be how he's remembered."

That source, by the way, is Ian Mackey. Despite all the insults, he remains gracious and mature, unlike Basye. His advice is simply to stop with the bigotry.

My advice to Basye, as if he would want it, is less classy. It goes like this: The next time someone reduces you to a quivering pile of bile, take it like a man.