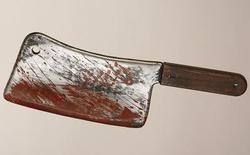 Remember that gruesome scene from Quentin Tarantino's Reservoir Dogs -- the one where a victim is bound to a chair, tortured, cut up, and doused with gasoline in an abandoned warehouse? Well, that scene carried out in real life last month in East St. Louis, according to new details revealed in the death of 22-year-old Zachary Irvin.


Parts of Irvin's dismembered body were found burning near a warehouse in East St. Louis last month. As the Post-Dispatch reports today, investigators say the two homeless men accused of murdering Irvin -- Dennis Iagulli, 41, and James Pierson, 36 -- fashioned the warehouse into a human slaughterhouse. After shooting Irvin in the neck, the two allegedly dismembered him in the abandoned building using a meat cleaver, drywall saw, metal sheers, tin snips and a claw hammer. They then set his body parts on fire. Irvin's legs and one arm were never accounted for.

Pierson was arrested wearing Irvin's belt. The victim -- who recently moved to St. Louis from the tiny town of St. Elmo, Illinois -- allegedly met the suspects at the Rev. Larry Rice's New Life Evangelistic Center in downtown St. Louis, where they got into an argument. The suspects then lured Irvin to East St. Louis with the promise of possible employment.

The homeless shelter says they have no record of Irvin staying there. Iagulli, meanwhile, was banned from the shelter.