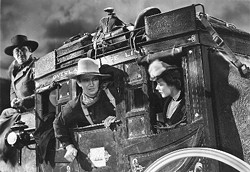 The only thing missing was the Duke.
You know things are getting weird in St. Louis when the kooks attempt to recreate scenes from Stagecoach. Last night just before 8:30 p.m., a man chased down one of the St. Louis Carriage Company's horse-drawn carriages, climbed into the driver's seat and attempted to ... who the hell knows what he was trying to do? The bandito told driver Larry Turner to stay calm, then cracked him over the head with his cane, which convinced Turner that the time was right to jump from the moving carriage.

That's when the cavalry showed up.

Two members of the armed forces saw Turner jump from his carriage and offered assistance. Much like the heroic horse in any classic western, Turner's trusty equine companion, Harry, knew exactly what to do: He ran for the stables, where safety and reinforcements awaited. Turner and the military men drove after him.

Sure enough, Harry made it back to the barn, with his driver and the cavalry in hot pursuit. The police were called, and our unidentified desperado was taken into custody where he's still being held. Neither Turner nor Harry were seriously injured.

It's 2012, and St. Louis had an honest-to-Clint horse chase through downtown. The east coast is going to make so much fun of us when this news filters back there in six-to-eight weeks, depending on if there's still snow in the Cumberland Gap.