A split-second decision derailed Johnson's life. Now Demetrius Evans uses both his own and Johnson's story as a warning 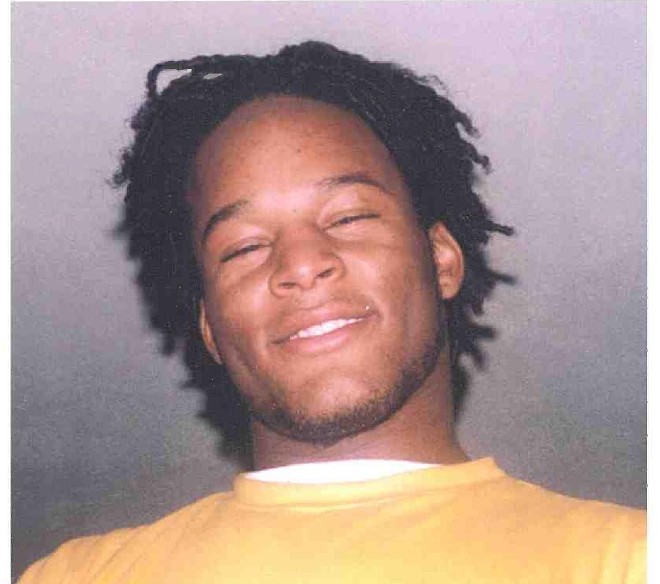 Court records
Kevin Johnson, shortly before his incarceration in 2005

Demetrius Evans knew one thing after he pointed a gun at a police officer’s head — that what he did next would change his entire life.

An officer had just found him cowering behind a trash can after Evans, 27 at the time, tried to evade police in a vehicle chase. He’d been “on the run” for nine months after missing a court hearing. With his criminal history and the police on his tail, he feared he’d have to spend the rest of his life in prison.

He started to cry as the officer pointed his gun and yelled, “Put your hands on the wall!” Evans complied, but when the officer reached to return his gun to its holster, Evans jumped to steal the officer’s weapon. He pointed it at the officer’s head as a police dog bit at his ankles.

At that moment, Evans weighed what to do next. He was “already prepared to die,” Evans recalls in an interview 26 years later. To him, death was preferable to life in prison, and he thought that killing or threatening to kill that officer would be the ticket out.

But then he thought of his unborn daughter, who was due in six months.

“‘I want to see my child,’” Evans recalls thinking. “‘I don’t want her to be like me and not know her father.’”

So Evans dropped the gun and took a beating from the police. He ended up with a 10-year prison sentence but was released in 2002. 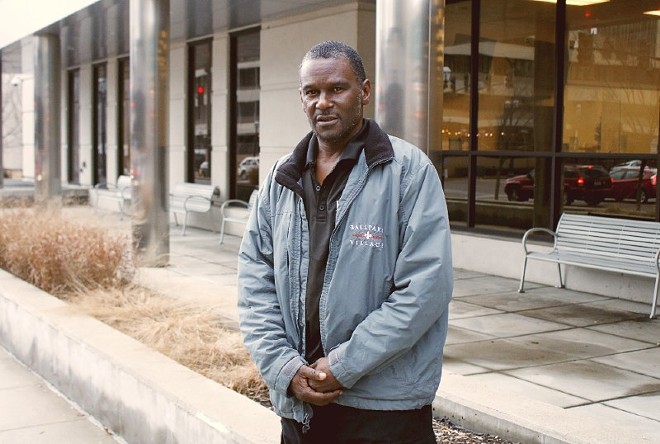 Ever since then, Evans has devoted his life to mentoring at-risk youth. In 2017, he founded Sudden Impact I.C.U., a nonprofit providing resources for at-risk youth to help turn their lives around.

More recently, Evans has turned to teaching kids at the St. Louis County Juvenile Detention Center about how to make the right choices during moments of high stress. He uses his own life as an example — and also the life of Kevin Johnson.

Missouri executed Johnson on November 29 for the murder of officer William McEntee in Kirkwood. Like Evans, Johnson was wanted by police on the day of his crime. On July 5, 2005, Johnson’s 12-year-old brother Joseph “Bam Bam” Long died during a police search for Johnson. Johnson blamed McEntee for his brother’s death and killed him a couple hours later.

Whether Johnson’s murder of McEntee was spontaneous or pre-meditated was a point of debate during his trials, but Johnson always claimed he acted on impulse. In an interview before his execution, Johnson said he wasn’t thinking, that he “didn’t even know why the shooting happened.”

Still alive and free today, Evans knows how close he was to ending up like Johnson. Before Johnson died, Evans and Johnson’s former mentor, Pamela Stanfield, got his permission to use his life story as a cautionary tale for youth at the St. Louis County Juvenile Detention Center on what happens if you don’t think before you act.

“Me thinking is what has me here speaking out today,” Evans says. “They [the police] had the right to put holes in me, but because I dropped the gun and took the whopping, I’m here talking to the kids now.”

Stanfield’s relationship with Johnson began after his arrest in 2005. She met Johnson when she was his school principal at Westchester Elementary in Kirkwood, but their friendship didn’t develop until Johnson was 19 and locked up at the St. Louis County Jail for McEntee’s murder. Stanfield visited Johnson and helped him publish two books about his early life and time in prison. There is a third book on the way about his final days.

Stanfield and Evans started teaching their program, called Split Second Decisions, three months ago. Before Johnson died, Stanfield relayed all the legal moves of Johnson’s case up until his death and what it was like to witness his execution. 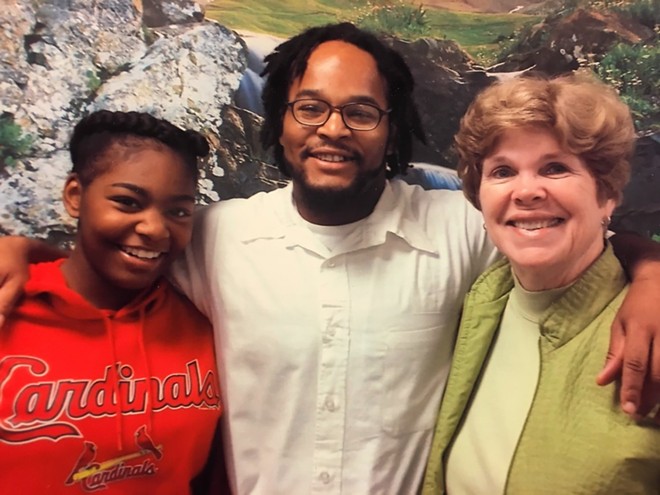 “You just pray that it's real for them, because it could change their lives,” Stanfield says.

As an older white woman, Stanfield admits her words may not hold much power for male teenagers at the juvenile detention center, especially Black male teens. So Stanfield read Johnson’s words to the kids from emails he sent her. Johnson wrote of his regret and how he’d do “a lot of things differently.”

“I would choose not to carry a gun,” Johnson wrote. “That’s first because as you’ve probably heard before ‘guns don’t kill people, people kill people’…Since being incarcerated, I’ve learned to think things out before I act or react.”

Having a male voice of wisdom is something Evans says he wished he had growing up.

Evans spent a large chunk of his childhood in the St. Louis County Juvenile Detention Center. At age seven, he started to run away from home (once, in an attempt to find his father). He got in trouble for stealing from grocery stores and taking cash from gas station registers.

By the age of 10, Evans says he’d been in the county’s juvenile detention center 22 times.

From ages 7 to 10, Evans says he was locked up with Kevin Johnson’s father, Kevin Johnson Sr., who was about five years older than Evans and protected him. “He taught me how to fight up in there,” Evans says. 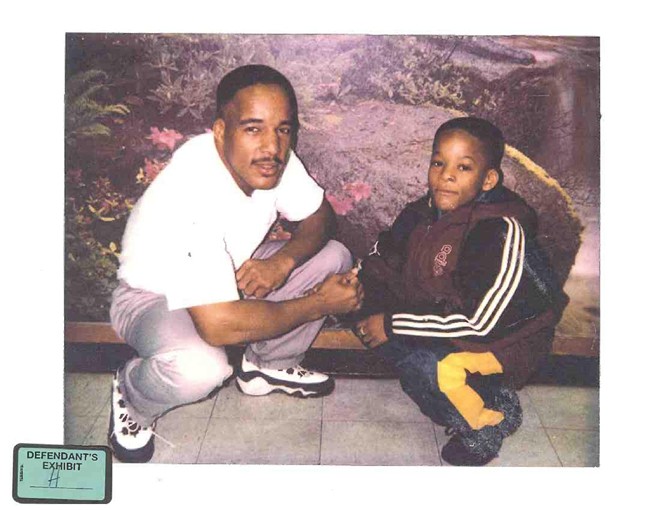 Now 53, Evans puts most of his energy into helping youth. After the end of his final incarceration in 2002, he started sneaking into the county’s juvenile detention center, with the help of officers who knew him, to mentor kids. His unofficial volunteer role eventually turned legit. He’s now a deputy juvenile detention officer.

The Split Second Decisions program he co-teaches with Stanfield has apparently already made a difference. In written statements provided by Stanfield, the kids shared what they learned from Evans and Johnson.

“Talking about Kevin has made me wanna think before I do something, or take time in your head to think like, ‘If I do this, what’s gonna happen to me or to my family and friends,” wrote one 15-year-old.

“It’s meant a lot to me and I need to stop being impulsive and think before I do something,” wrote a 16-year-old. “It’s hard for me to control my anger. This makes me want to keep working.”

“I’m trying to find myself,” a 17-year-old wrote. “This lesson done taught me a lot. I want to better myself sometime. I don’t think. But this lesson made me think about a lot of stuff.”

Another teen said Johnson’s story helped him look at life “from a different view.”

“I’m 18 years old and had my first born son at 17,” he wrote. “Hearing his [Johnson’s] story is sad and scary because he had a family he had to leave. Everyday, I think about my son and how I’m not able to be with him and it hurts me, it really does… This is not my life. Sometimes I wanna give up but I can’t. My life is in God’s hands. Everything I do now is for my son.” 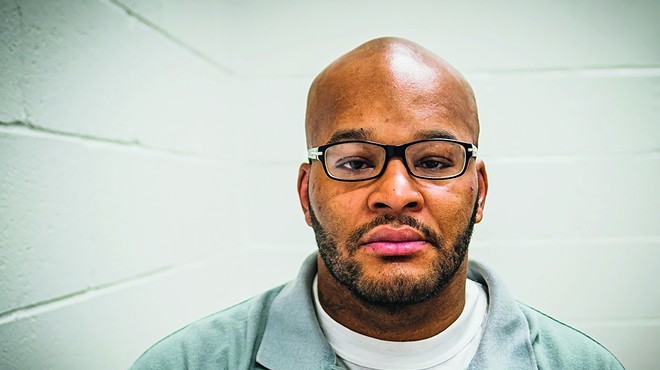 Missouri Executes Kevin Johnson, 37, for 2005 Slaying of Kirkwood Officer: Prosecutor Bob McCulloch was in Bonne Terre to witness the execution

Weeks after Johnson’s death, Stanfield says “it’s not real” to her yet.

Stanfield knows Johnson is gone. She remembers the blur of his funeral, his body in a casket — the slight smile on Johnson’s face, how she touched his shoulder. Still, the reality of Johnson’s death has yet to fully set it in, she says. It was normal for them to write to each other every few weeks, so gaps in their communication isn't abnormal.

“It probably won’t register until all of a sudden my brain goes, ‘You haven’t heard from Kevin in forever,’” Stanfield says.

In a way, Johnson lives on in his words. Stanfield still has his writings from the last 97 days of his life. Johnson tried to write about his final days in diary-like entries.

Stanfield has yet to assemble all of his final passages into a book, but she noticed one passage in which Johnson wrote about a conversation the two had about guns.

“‘How can you tell a kid in a rough neighborhood to put down their gun when everyone else has one?’” Stanfield asked Johnson in the passage. Johnson wrote that he struggled to come up with an answer. He wrestled with the guilt of his brother’s death — and regret for owning a gun.

After that conversation, Johnson wrote he “hoped like hell that the youth out there could learn from my story and leave the guns where they found them so that they could live long prosperous lives."