Jon Hamm is Sick of Everyone Talking About His Huge Penis (Sorry, Jon!) 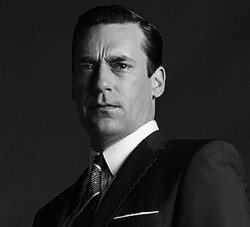 via
Jon Hamm has a hard life.

How can the St. Louis native celeb get everyone to stop talking about his gigantic penis? Unfortunately, Mr. Hamm, telling Rolling Stone that you are really sick of everyone talking about your private parts may not be the best way to stop the Jon-Hamm-Big-Penis headlines. (Case in point: This Blog Post).

Consider this post our apology! Sorry, Jon! Sorry, that you have an inconveniently, problematically enormous penis. And sorry that your groin is getting so much attention. We know you're doing your best to keep it out of the spotlight. OR ARE YOU?

It's hard to know.

On the one hand, this all started, as we diligently reported on Daily RFT last week, on the set of Mad Men, when Hamm allegedly declined to wear underwear, which is apparently a huge distraction and is creating some extra work for the poor marketing folks who have to learn Photoshop just to make the big penis go away.

And giving these quotes to Rolling Stone is a pretty good way to ensure the continued flow of good old-fashioned penis headlines:

Most of it's tongue-in-cheek. But it is a little rude. It just speaks to a broader freedom that people feel like they have -- a prurience.

And in regards to the "Jon Hamm's Wang" Tumblr:

They're called 'privates' for a reason. I'm wearing pants, for fuck's sake. Lay off. I mean, it's not like I'm a fucking lead miner. There are harder jobs in the world. But when people feel the freedom to create Tumblr accounts about my cock, I feel like that wasn't part of the deal.... But whatever. I guess it's better than being called out for the opposite.

On the other hand, Rolling Stone did do a cover story about him, and he couldn't just decline to comment on penis questions, and the reporter certainly had a responsibility to ask the tough questions that the public wants to know about. And we guess there's not much he can do about a close-up shot from the paparazzi when he's walking around town.

So, again, consider this our apology. Sorry, Jon. Sorry for everything.