Jerod Bargar allegedly claimed he was not involved in the Capitol riot, but had posted to Facebook about it 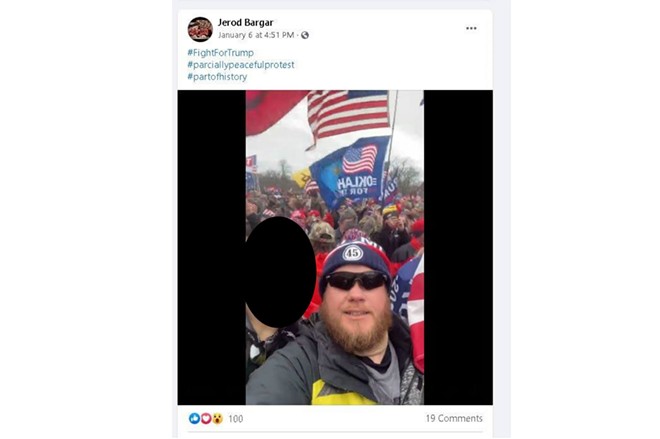 U.S. Department of Justice
Federal authorities say Jerod Bargar posted this photo of himself at the Capitol on Jan. 6, 2021.

A Centralia, Missouri, man has been accused of bringing a loaded gun to the U.S. Capitol and misplacing it in the chaos of the insurrection riot on January 6, 2021.

Federal authorities arrested Jerod Bargar, 36, on Wednesday for felony and misdemeanor charges after he allegedly left his loaded 9mm semiautomatic pistol on restricted grounds at the Capitol.

According to a federal affidavit, Capitol police found Bargar's gun on the ground during the insurrection. The gun was not registered in the District of Columbia and Bargar was not licensed to carry a firearm there as required by law.

Authorities did not at first know the gun belonged to Bargar, but FBI agents interrogated Bargar in his home 12 days after the insurrection after an anonymous tipster said Bargar posted photos of himself on Facebook saying he and a friend were 12 feet away from the individual who was shot inside the Capitol, according to court documents.

Bargar told agents he went to Washington, D.C. for a political rally, and after the rally, he and his friend walked to the Capitol building. Bargar said he did not participate in any of the "chaos" and illegal activity because he knew where the "line" was. He said it was obvious officers did not want people inside the Capitol.

Federal investigators did not immediately connect Bargar with the gun.

Instead, investigators tracked the gun to a man who sold it to a pawn shop in Jefferson City. Bargar's stepfather later bought the gun and gave it to Bargar about a year and a half before the insurrection, according to court documents.

When interrogated again with this new information, Bargar said he and his friends were near the front of a group of Capitol protestors.

Police had sprayed tear gas and other deterrents into the crowd and a woman was knocked to the ground, so Bargar and his friend helped her up, Bargar told federal agents. Soon after he realized he lost his gun.

Bargar wore the gun in a distinct inside-the-waistband holster with "We the people" printed on it. He said he is always armed and wanted to be armed when he entered the "belly of the beast" for "self-protection."

In addition to his alleged spoken admissions, Bargar posted an image of himself in the Washington, D.C., area and at the National Mall on his public Facebook account. The post's caption read: "There's patriots and traitors, where do you stand?"

Bargar also took a photo at the Washington Monument on the day of the insurrection and shared it in a separate Facebook post on January 6, 2021. The post used hashtags including #FightForTrump, #PartiallyPeacefulProtest and #PartofHistory.

To even further incriminate himself, investigators noted in court documents that Bargar's Facebook cover image is a photo of himself giving a thumbs up at the Washington Monument in the same clothes he wore in the protest photos.

Investigators noticed that Bargar had later changed the name on his account and his city of residence to New Jersey.

Bargar is the 23rd person from Missouri accused of breaching the Capitol. In the year and a half since January 6, 2021, more than 850 people have been arrested for crimes related to the insurrection.