Mizzou Will Not Punish Student Over Viral Racist Comment

Meg Miller went viral for saying “If they would have killed 4 more n****rs we would have had the whole week off” in a private Snapchat photo to her friend. 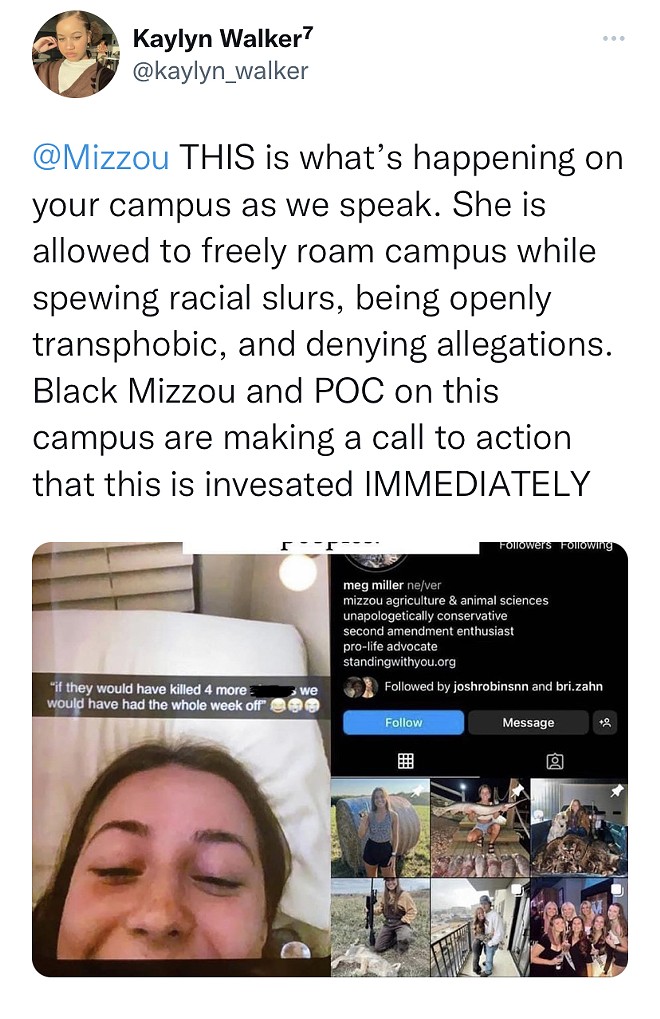 The University of Missouri has decided not to punish a student who shared a racist comment on social media.

First reported by the Kansas City Defender, students started to demand Meg Miller’s expulsion soon after a screenshot of a Snapchat message she sent to a friend went viral.

Miller, a white Mizzou student, wrote: “If they could have killed 4 more n****rs we would have had the whole week off.” She sent this message to a friend along with laughing and crying emojis and a picture of herself smiling.

Yet, in a statement this week, Mizzou announced Miller’s actions did not fall within the scope of punishable speech.

Upon review, Mizzou found Miller’s racial slur was sent as a direct message to a friend — not as a directed form of harassment. University officials decided Miller’s speech was protected by the First Amendment as a result.

Mizzou has publicly denounced similar messages in the past while simultaneously stating the speech doesn’t violate university policies on free speech. This happened last fall, when flyers promoting white supremacy were posted around campus.

While Mizzou condemns this language, the University of Missouri is a public university, Choi wrote, meaning it cannot overtly restrict free speech without bordering on government censorship.

“Because we are a public institution, constrained by the First Amendment … the university has no grounds to discipline the student who sent the message, even though it is diametrically opposed to our values,” Choi’s statement reads.

Still, Choi emphasized that the First Amendment “has limits,” and the University of Missouri “will take action when individuals are subjected to harassment that violates our rules prohibiting discrimination.” He pointed out that a student had been dismissed last year after directing a racial slur at another student.

The Kansas City Star reports that Miller has resigned as president of Mizzou’s chapter of Turning Point USA, a far-right advocacy group for conservative politics in schools.

It’s unclear what Miller was referring to in her message, or what conversation led to her saying “If they would have killed 4 more…” But in an infamous broadcast in the 1980s, on the first federal holiday for Martin Luther King Jr.’s birthday, disc jockey Doug Tracht suggested “killing four more” so the country could take a whole week off.

“Though the administration says punishment of this individual is not an option, the university should use this opportunity to redouble its efforts against racism, antisemitism and other dangerous ideologies that dehumanize both the discriminated and the discriminator,” Terry said. “Our caucus will watch for their next steps vigilantly.”