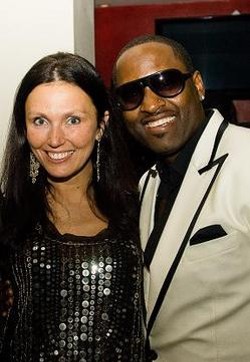 Photographic proof that DeWitt and Gill are friends.
A few weeks back we reported how Ira DeWitt, wife of Cardinals' president Bill DeWitt III, had settled her beef with R&B crooner Johnny Gill.

Gill is signed to DeWitt's St. Louis-based record label, Notifi Records. In August, DeWitt sued the former member of New Edition in Los Angeles after the singer went on a Twitter tirade, accusing her of releasing a single from his new album without his permission. A few weeks later, the two settled their disagreement and announced everything was hunky-dory.

More proof of that came last night when Gill sang the national anthem prior to Game 3 of the NLCS at Busch Stadium. Gee, we wonder how he got that gig?

As was evident last night, Gill still has some impressive pipes. But we gotta say that last night's performance didn't quite measure up to the following video of him singing the Star Spangled Banner at an early '90s Lakers' game. Gill's outfit last night also didn't measure up. Wow.