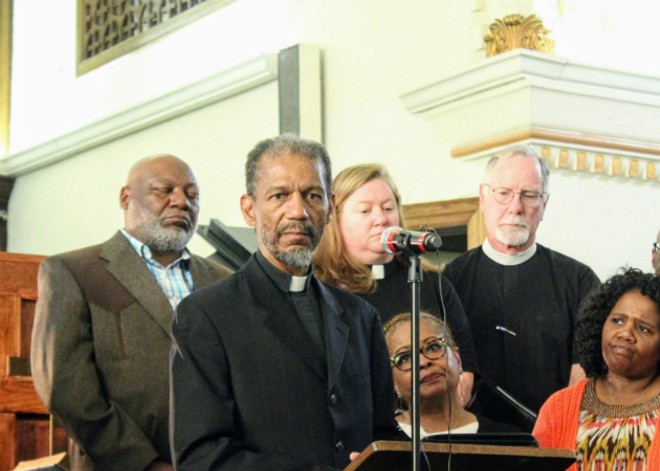 DOYLE MURPHY
The Rev. Darryl Gray speaks in 2017 about his arrest outside Busch Stadium.


More than four years after their arrests during a police protest, a pastor and activist have won their fight to put their case in front of a jury.

The Rev. Darryl Gray and Calvin "Cap" Kennedy were at the rear of a protest march on September 29, 2017, when officers slammed Gray to the pavement and cuffed him outside of Busch Stadium. Kennedy came to Gray's aid and was tasered and tackled before officers dragged both men away.

The case is an outlier among the numerous protest-related arrests made during the 2017 demonstrations that followed ex-St. Louis cop Jason Stockley's acquittal on a murder charge. Since then, the city has chosen to allow charges filed against hundreds of people to lapse without action, but they've continued to pursue the case against Gray and Kennedy.

And while the city, through two mayoral administrations, has continued the prosecution, it has also fought against the request by the two men for a jury trial, arguing that the charges are only infractions, similar to a parking ticket.

On Tuesday, St. Louis Associate Court Judge Nicole Colbert-Botchway ruled that Gray and Kennedy are due their day in court.

The two have long contested the charges, claiming that police lied about the encounter. The case was the subject of an October 2020 Riverfront Times cover story. Gray and fellow clergy members have told the RFT that officers were manhandling two female pastors who were helping to protect protesters from traffic in an intersection near the stadium, and when Gray protested verbally, an officer body-slammed him to the street.

Officers at the scene claimed no one touched the women; they instead testified that Gray grew enraged and shoved an officer in the chest without provocation before his arrest.

Gray and his attorney, Javad Khazaeli, have argued it doesn't make sense that Gray, then 63 years old and 150 pounds, would have tried to physically attack a cluster of officers, all of whom were decades younger and bigger. Further, a video that shows the moments just before and after the initial confrontation encompasses all but a couple of seconds of the skirmish — seemingly not enough time for the calm, de-escalation conversation that Detective Ronald Vaughn claims he had with Gray before the pastor supposedly attacked him.

Khazaeli has argued that the city has fought his clients' demand for a jury trial to avoid putting Vaughn, who is now facing federal charges for allegedly forging a doctor's note, and similarly checkered colleagues on the stand to testify. Khazaeli believes the city is worried a trial could reveal uncomfortable truths about the actions of city police officers.

Both sides accuse the other of using the low-level criminal case against Gray and Kennedy to maneuver in a federal civil lawsuit filed by the men and others arrested during the protests. Dozens of demonstrators and others caught up in the police response to weeks of marches claim police ran wild after Stockley's acquittal, brutally abusing people in the streets and making illegal arrests.

A now-former officer who was part the response, Dustin Boone, was convicted in federal court earlier this year in the violent arrest of an undercover officer whom he and other officers mistook for a protester.