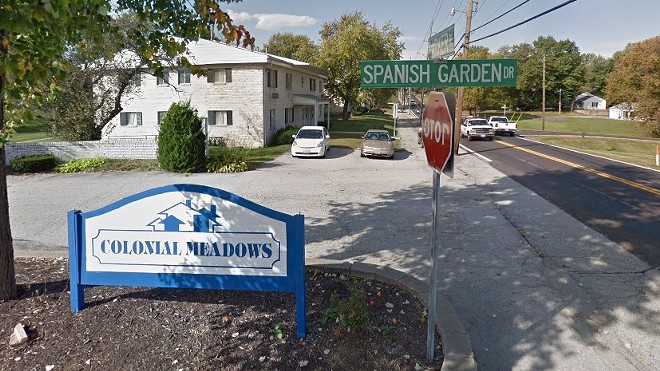 Google Maps
Some shit went down in Spanish Lake

One day in mid-March, Kosta’s toilet overflowed.  Once it started, it wouldn’t stop.

“It was like a chemical bomb had gone off inside it,” said Kosta, a local rapper. “Sewage, raw sewage everywhere.”

Kosta was doing his best to contain the spill when he realized the unit above him was having the exact same problem. “There was sewage coming out of the vent in the top of the bathroom,” he added.

Just then, the sink in Kosta’s kitchen backed up, too, filling the basin and spilling water onto the ground. Kosta was quickly running out of towels.  He blames the landlord at his apartment building in Spanish Lake.

Admittedly, we don’t know exactly what a sewer lateral is, but we assume it takes the foul stuff away. In this case, however, we got more of it.

Our plumber, upon arrival, asked if we had been using Charmin toilet paper. We said no.

“It’s almost always Charmin,” he said, mentioning it as disdainfully as a heart surgeon mentions Big Macs. This plumber couldn’t tackle the problem immediately, since his schedule was, um, backed up, so a second plumber arrived later that day.

His first question: “Do you use Charmin?”

Turns out that two and three-ply toilet paper is more likely to clog pipes; in general, the worse the TP feels when you wipe, the better it is for the plumbing.

Kosta didn’t use Charmin either. But he had even more trouble getting relief.

When his apartment started going to shit, it was around 6 p.m. He immediately called the apartment’s emergency line, but it wasn’t until 1 p.m. the next day that a maintenance man showed up.

He had a plunger, and that was about it.

“It’s slumlord shit,” Kosta said, describing the building’s maintenance generally. The day after he called the emergency line, a rental office employee knocked on his door and told him to stop “threatening” her with plumbing complaints.

The building had “evicted people for less,” she added. Eventually, the sewage in the toilet receded. The water in the sink followed suit. Kosta deployed every towel in the house to do the sopping up. “I’m 100 percent sure,” he added, “that it’s not fixed at all.”