SLU President Lawrence Biondi: "To Those Of You Who Have Been Critical...I Have Listened" 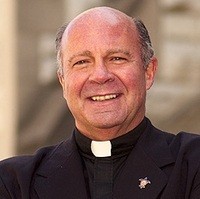 Father Lawrence Biondi has been personally hurt by the things his critics have said about his leadership as president of Saint Louis University. But he has listened to them.

So says Biondi in a letter sent out university-wide today that, for the first time, appears to publicly recognize the need for change in response to the intense backlash he has faced at the Jesuit university over the last several months.

What kind of reform? The letter, full version on view below, doesn't have a whole lot of specifics -- at least not the kind his critics want.

"I am glad that he acknowledges there needs to be change," Liz Ramsey, spokeswoman for SLU Students for No Confidence, tells Daily RFT. "He doesn't seem to understand that one of the biggest changes we need is him gone."

First, a quick recap of the criticism Biondi has faced. Last week, news broke that the chair of the Department of Theological Studies was resigning in protest of the president -- arguing that Biondi has created a "culture of fear" and has failed to even publicly acknowledge the overwhelming vote of no-confidence from faculty last year. Faculty members have directly called on the board of trustees to fire Biondi -- and last week's resignation was not the first high-profile departure in protest of his leadership.

Biondi sends out a monthly message to trustees, faculty, students, parents, etc. -- but this one was unique given its recognition of the internal dissent.

He writes, in part:

I am acutely aware that the past several months have been difficult for all of us in the SLU community. I admit that some of the things that have been said have hurt me personally, but even more have hurt our wonderful University. I say this not to point fingers of blame, but to acknowledge reality. All of us, including me, must find new ways to move forward in more collaborative and conciliatory ways. As President, I should lead that effort, and I am.

To those of you who have been critical of my leadership, I have listened. While I do not agree with everything that has been said, my reflection leads me to see that it can't be business as usual going forward. I am committed to being part of the solution; to working more closely with those around our campus who say that their voices are not being heard. I can't promise that we'll always agree, but I can promise a sincere desire to rebuild the bridges that have been damaged and to move our University forward. OUR University.

I have never viewed the progress SLU has made during the past 25 years as my own doing. Rather, SLU has progressed because of all of us, including our wonderful students who have graduated and gone on to do great things in our world. Our alumni make us proud, and they tell the world who we truly are at Saint Louis University.

I love SLU. I know that each of you loves SLU, too. I ask only that we find a way to use this love that binds us to take us to better days. With God's help and a commitment from all of us, there are no limits to what we can achieve.

The rest of the 20-page report outlines various updates at the university.

Continue for comments from SLU Students for No Confidence and for the full letter.